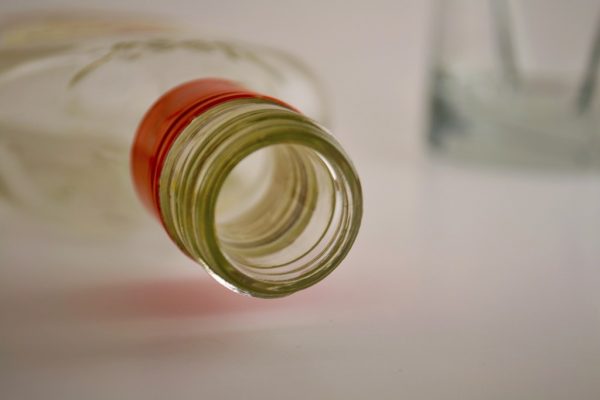 At the ripe old age of 21, I stopped being able to drink beer. Despite drinking beer regularly for years before that — sorry, Mom — I suddenly began getting incredibly ill after a single beer. For a few years after that I drank only wine and liquor, which my body seemed to handle okay, until it didn’t. Eventually, even the smallest amount of alcohol could leave me in bed for 24–48 miserable and painful hours, but it wouldn’t necessarily happen every time—and the potential existence of a hangover-free morning kept me coming back for more.

I know what you’re thinking. “Well, why didn’t you just stop drinking?” To which I will answer: “I’m not that smart, and I really liked gin and tonics.” Instead of listening to what my body was telling me, I kept trying to figure out my weird reaction by testing different combinations of drinks, drinking more water, or eating more or less food before or after drinking. Nothing helped. Finally, after years of delaying the inevitable and spending my weekends in the clutches of a horrendous hangover, I made a decision: I had to stop drinking.

So, about a month ago, I stopped. Not because I wanted to, but because my body made it increasingly obvious that I had to. I’ve spent the past four weekends alcohol-free, and I must say, I don’t hate it. Aside from having my weekends available to do things besides writhe in pain on the couch and singlehandedly keep the aspirin business alive, I’m saving money! According to my budget, I was spending about $50 a month on alcohol, but that line item is deceiving. It’s not taking into account all of the additional spending I was doing because of alcohol. In a typical month I would have spent money on at least a few of the following alcohol-related expenses:

In total, I’m saving at least $60 per week by giving up alcohol. I’d be lying if I said that money wasn’t being funneled into something else unnecessary like a FitBit or new artwork for my apartment or new scratching posts for the cats, but at least those things are somewhat useful. (Especially if you’re my cats.)

To be honest, I haven’t missed drinking like I thought I would. I worried that it would be weird to be at social gatherings where I was the only one sober, but it hasn’t been. I get to watch my friends be drunk and ridiculous and be thankful that A) I don’t look as absurd as them and B) I can make plans for the next morning without fear of being sick. It’s cool to have my weekends back, and it’s really cool to have that money back.

It’s also cool, if embarrassing, to acknowledge that I had been lying to myself for years. I had convinced myself there was no fun to be had without alcohol involved. Even sitting around and watching a movie required drinks, in my mind. But in the past month, I’ve had game nights, movie nights, four office Happy Hour hangouts, and two birthday parties. All of them were done sober, and all of them were still just as fun as they would have been otherwise. (Possibly more fun without the threat of puking.)

Things are all well and good now, but I definitely can’t promise that I’ll never drink again, even if it’s risking a potential reaction. My self-control isn’t always the best, and I have a tendency to forget how bad things are after some time passes. But for now, I’m happy with my decision. It’s nice to know I don’t have to have a drink, because it turns out hanging out with my friends is fun on its own.

1. We Did Good, Billfold
2. Question Wednesday
3. What I Learned From Five Years of Writing and Editing for The Billfold
4. How a Program Assistant Dealing With a New Paycheck System Does Money
5. Classic Billfold: What I Wanted From My Move to Portland and What I Got
alcoholdrinkingfriendshiplife-lessonsmoney