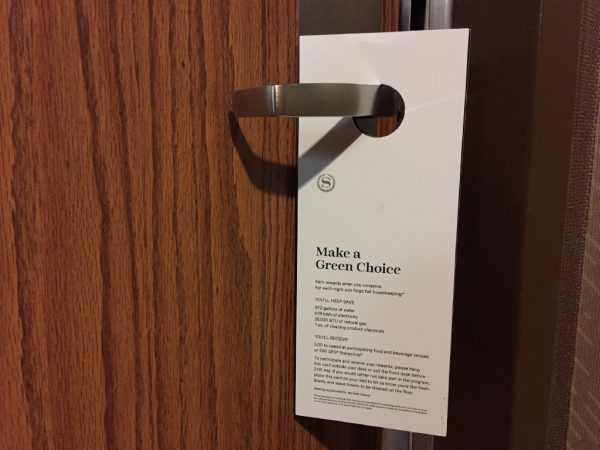 But before all of that, I woke up in the Sheraton Gateway Los Angeles Airport Hotel.

There are three aspects of waking up in the Sheraton Gateway Los Angeles Airport Hotel worth noting:

The robot’s claim that it would bring “anything” to your room was a little misleading; I dialed 0 and asked for a gin and tonic, and learned that the robot could only bring toiletries. However, both the toiletries and the use of the robot were complimentary, and I ended up using the robot twice in a 24-hour period. (Because I could.)

The robot did exactly what you’d expect a delivery robot to do: it made bleep bloop noises; it displayed “expressions” on its touchscreen face; and when I stepped into the robot’s path to test its adherence to the First Law of Robotics, the robot did not harm me. It stopped —giving me something like a two-foot berth—and waited patiently for me to get out of the way.

Here I am retrieving my new (free) slippers from the robot:

I did not have to tip the robot, but I did have to rate my experience—and of course I gave the robot five stars.

This may very well be the future: first, the free robots and the $5 coupons will take the bulk of the housekeeping jobs; second, hotels will start charging for both robot use and housekeeping services. (Want the robot to deliver fresh towels? That’ll be $5 per towel, plus a $2 “robot fee.”)

Then, as more and more people use the robots, they’ll gradually get covered with fingerprints and insects and hair, and they won’t get as many five-star reviews.

Or maybe not. Maybe airport hotels—unlike, say, airplanes—will continue providing as luxurious an experience as I received at the Sheraton Gateway, where I left feeling like I had gotten not only a good night’s rest but also a fun robot adventure. I even swiped the Sheraton inkpen from the nightstand so I could keep it on my desk and remind me of the time I flew to Los Angeles, played with a robot, and rang in the New Year with friends.

1. We Did Good, Billfold
2. Question Wednesday
3. What I Learned From Five Years of Writing and Editing for The Billfold
4. How a Program Assistant Dealing With a New Paycheck System Does Money
5. Classic Billfold: What I Wanted From My Move to Portland and What I Got
los-angelesroboticsrobotstechtravel