What Children’s Literature Teaches Us About Money: Betty Smith’s ‘A Tree Grows in Brooklyn’ 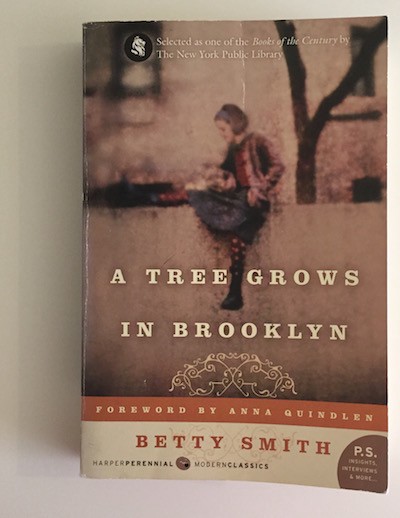 I’ve written before that children’s literature kind of divides itself into “lesson books” and “life books:”

What Children’s Literature Teaches Us About Money: Lois Lowry’s ‘Anastasia At Your Service’

All of the books I’ve read thus far can be categorized on a spectrum of “this book is designed entirely to teach young readers a specific lesson” to “this book is about the complexity of life, which defies lesson-making.”

Betty Smith’s A Tree Grows in Brooklyn, which is at least partially autobiographical, is very, very much about the complexity of life. (Every time I re-read it I’m overwhelmed by the amount of emotion and honesty the story contains, and how sympathetically Smith writes all of her flawed but understandable characters.)

But it also contains a lot of directly-stated lessons about education, money, and the workplace. I’ll start right at the beginning, when Johnny Nolan explains the importance of unions to eleven-year-old Francie:

“Before I joined the union the bosses paid me what they felt like. Sometimes they paid me nothing. The tips, they said, would take care of me. Some places even charged me for the privilege of working. The tips were so big, they said, that they could sell the waiting concession. Then I joined the Union. Your mother shouldn’t begrudge the dues. The union gets me jobs where the boss has to pay me certain wages, regardless of tips. All trades should be unionized.”

What struck me, when I re-read the book (in a single day because it was that compelling and I could not put it down) wasn’t Johnny Nolan’s ode to unions as much as it was his description of the workplace.

Johnny works in the 1910s version of the gig economy, picking up singing waiter jobs when they’re available—he never appears to be offered a full-time position with set shifts—and the idea that your employer might get a cut of your earnings, simply by virtue of providing the framework through which you can perform your occasional trade, is an awfully familiar one.

(Yes, if there were no restaurants Johnny could not be a singing waiter, and if there was no Uber people couldn’t be Uber drivers. Point made.)

Johnny’s wife Katie also “freelances” as a janitor, a common enough occupation for women in the early 1900s, and one where she is expected to provide her own supplies and hustle for her own clients.

Together, they barely make enough money to survive—but they always make sure to save a few pennies, as depicted in another one of the book’s Big Lessons:

“You must do it thus: You go to the green grocer’s and ask how much are carrots the bunch. The man will say three cents. Then look about until you see another bunch, not so fresh, not so large. You will say: May I have this damaged bunch for two cents? Speak strongly and it shall be yours for two cents. That is a saved penny that you put in the star bank. It is winter, say. You bought a bushel of coal for twenty-five cents. It is cold. You would start a fire in the stove. But wait! Wait one hour. Suffer the cold for an hour. Put a shawl around you. That hour will save you three cents’ worth of coal. That is three cents for the bank. When you are alone at night, do not light the lamp. Sit in the darkness and dream a while. Reckon out how much oil you saved and put its value in pennies in the bank. The money will grow. Someday there will be fifty dollars and somewhere on this long island is a piece of land that you may buy for that money.”

This advice comes to Katie Nolan from her mother, Mary Rommely. Mary had a star bank, and she saved up for her piece of land and bought it—or thought she did, because she could not read the fake contract the swindler had her sign. That’s why Mary ensures her daughter not only knows about saving money, but also knows how to read.

Which brings us to one of the third Big Lessons: the importance of education, especially as a tool to ensure you don’t lose money. It’s fascinating how the Nolans, in a book published in 1943 about life at the turn of the 20th century, lie about their home address so their daughter can get into a better public school. This stuff has been going on for a long time, y’all.

But Francie gets her education. She eventually goes to college. Meanwhile the star bank is saved into and withdrawn from, over and over again, until the Nolans have their piece of land: the cemetery plot in which they bury Johnny.

That’s another one of the book’s lessons, although it isn’t stated as emphatically as the other ones. Katie Nolan can read. Her children have more education than she does. They still lose all of their savings to an unscrupulous undertaker who preys on the poor. Katie is aware of what is happening even as the man explains how much money it will cost to bury Johnny, and she is powerless to stop it. This is how her life has always been: she earns and saves and a landlord tells her the family has to move, or an undertaker says the funeral package they purchased doesn’t include the cemetery plot, and all of her savings disappear.

Katie hopes that her children’s lives will be different, and so we follow much of the story through Francie Nolan’s eyes, watching her grow up and excel in school—except for the one English class where her teacher asks her to stop writing about poverty because “We all admit these things exist. But one doesn’t write about them.” We see Francie, after her father’s death, drop out of high school and enter the workforce, where she also excels. She gets better jobs than were ever available to her parents or grandparents. She works in offices, has set hours, and gets promotions. She also gets laid off as each of her employers cuts back or shuts down.

“Here I am,” she thought, “fifteen years old and a drifter. I’ve been working less than a year and I’ve had three jobs already. I used to think it would be fun to go from one job to the other. But now I’m scared. I’ve been fired from two jobs through no fault of my own. At each job, I worked as best I could. I gave everything I could give. And here I’m starting all over again somewhere else. Only now I’m frightened. This time when the new boss says ‘jump once,’ I’ll jump twice because I’ll be afraid of losing the job. I’m scared because they’re depending on me here for money.”

Once again: this stuff has been going on for a long time, y’all.

Francie continues to work and begins taking college classes (she writes “privately educated” on the forms so she does not have to reveal her lack of high school diploma). At the end of the book, she’s passed the entrance exams required to enroll full-time at the University of Michigan. We’re meant to understand that education does in fact lead to… well, if not quite constant success, then hope. Possibility.

Katie Nolan also finds new possibility and a relief from poverty in the form of her second husband Michael McShane, a former police officer turned politician who earns over $10,000 a year from his salary, his pension, and his real estate income. (That’s in 1918 dollars. Today McShane would be making $160,000.)

So we get the realistic and the fantasy ending, both in the same book. (Although Betty Smith’s father did die and her mother did remarry, I can’t find any evidence that the real-life family moved into a higher income bracket through this second marriage—and you’d think someone would have mentioned that.)

If you’ve read A Tree Grows in Brooklyn, what parts stand out in your memory? I could keep going, writing about the job that gives Francie a week of paid training (because WHO DOES THAT ANYMORE?), or the scene where Francie accidentally negotiates a raise from a boss who wants to underpay her, but I’ll stop here and turn the discussion over to all of you. After all, this novel is so complex that even analyzing the money and workplace aspects doesn’t begin to cover half of the story.

Next week: The Return of the Great Brain.

The week after that: No Coins, Please. (Yes, it’s happening.)

What Children’s Literature Teaches Us About Money: Gertrude Chandler Warner’s ‘The Boxcar Children’

1. We Did Good, Billfold
2. Question Wednesday
3. What I Learned From Five Years of Writing and Editing for The Billfold
4. How a Program Assistant Dealing With a New Paycheck System Does Money
5. Classic Billfold: What I Wanted From My Move to Portland and What I Got
book-reviewbookslabormoney