The Cost of Moving Your Stuff (And You) Across The Country 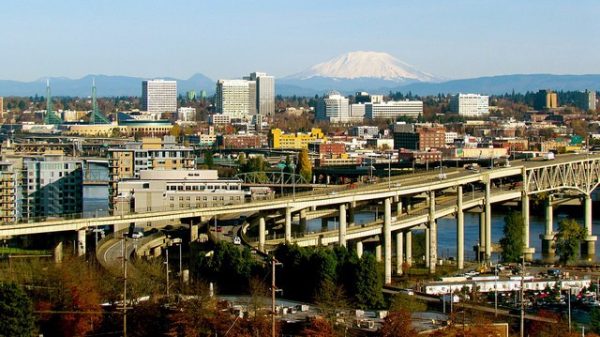 This past Christmas, I told my dad I was leaving Chicago and moving to Portland, Oregon. Since he remained so calm, I asked him to help me move. He agreed to take a cross-country road trip with me, my car, and whatever stuff made the cut for Portland. Luckily, I had several months to plan — I realize not everyone has this luxury, but if you’re considering a move, here’s what I can tell you about my experience.

If you’re moving several states away, you need to take a close, hard look at your stuff. I have never been particularly attached to mine in general, but most people feel connected to at least some belongings. But now is the time to ask yourself things like: How attached am I to my bed? To my bike? To my car?

In my case, I knew I wanted to keep my car, so that meant it was taking a one-way trip to the Pacific Northwest. I agonized over my bike, but decided to keep it. As for my bed and the rest of my furniture, I became decidedly less partial once my dad pointed out how unpleasant it would be to maneuver a U-Haul trailer hitched to the back of my poor 2004 Cavalier. I was also unclear on whether or not my car could handle that, and I decided it was more important to me that my car survive the trip than that I eventually arrive in Portland with the same furniture I had in Chicago.

That brings me to step one of a multi-part process:

1. Purge: Then, once you think you’re done, purge again. My last Chicago apartment’s lease ended in April, but I didn’t move to Portland until July. I spent the interim living with a friend, so I took the opportunity to get rid of most of my stuff before I got to her house. As my July move date approached, I took stock of what I’d used in those last several weeks and donated, gifted, or sold the rest. These things took a while, so if time is not on your side, I’d make your stuff’s arrangements as early as possible.

2. Pack: In April, I boxed up what I wanted to keep from my old apartment room by room, carefully numbering each taped-up box with a corresponding line in a spreadsheet. I detailed as much as I could what was going into each box, which came in handy later when it was time to unpack.

3. Ship with Amtrak: When it came to getting my stuff to Portland, I landed on a combination of three options: Amtrak personal shipping, USPS flat-rate shipping, and fitting whatever I could into my car. Amtrak will let you ship up to 500 pounds of stuff from one station to another, and they’ll even hold onto it for you if your boxes beat you there. The price is right, and if you follow Amtrak’s basic requirements (the 500 pound limit, no single box can weigh more than 50 pounds, some box size restrictions) you can get a lot of stuff shipped for cheap. Amtrak charges a fee per box per day to store your things for you, but your first two days of storage are free of charge. Rules per station may vary however, so call Amtrak to get specifics.

4. Ship with USPS: For my really heavy stuff (read: books I refused to part with) I used flat-rate shipping boxes and mailed them to myself via USPS. I had seven USPS boxes in total, but only ended up shipping six of them after deciding one of two fragile dishware boxes wasn’t packed as securely as it could have been. That was a good call, but more on that later.

5. Pack the car: I chose to keep things of value in my car with me (important documents, my mom’s engagement ring) but also fragile stuff (framed art, my beloved KitchenAid stand mixer). I was gifted a bike rack, and bought a camping gear bag to strap to the top of the car. I packed my car pretty poorly, but luckily a friend worked some major Tetris magic on my bad packing job. After he was done, my dad and I could have (albeit uncomfortably) fit a third passenger.

My car was a champ and got us all the way from Chicago to Portland without incident over the course of five days. Here’s how much it cost:

— Yard sale to rid myself of some belongings in Chicago: +$90, approximately.

— Amtrak shipping: $138.10 to ship 229 pounds of stuff in nine Home Depot boxes. If I’d known how laughably below the 500-pound max I was, I would have skipped USPS and shipped everything this way.

— Bike rack: Free, thanks to lovely Chicago friends who had a spare!

— Amtrak storage fee: Waived, miraculously, due to sheer Portland magic or something. This fee would have been $36 per day ($4 for each of nine boxes), for six days, or $216.

— Hotels: Four nights, $450 total. My dad very kindly offered to pick up hotel costs if I paid for gas. These, and food, were our biggest expenses.

— Meals on the road: ~$300, or $150 per person. My dad and I took turns buying each other food. We probably could have eaten more cheaply, but we treated ourselves to an amazing steak dinner in Deadwood, South Dakota. I regret nothing.

What I would do differently:

1. Amtrak was perfect and I wouldn’t change a thing. I do advise others to get an idea of how long it will take for their stuff to ship, in order to plan for storage costs.

2. If I’d known about USPS Media Mail in time, and been sure my personal shipment of books would have qualified, I may have gone that route if my books surpassed Amtrak’s weight limit. If you’ve got a large library, it might be worth looking into.

3. One of my USPS boxes contained my drinking glasses. I thought it was packed a lot more tightly than the one I chose to put in my car at the last minute, but I was wrong. Instead, I paid $12.35 to ship myself a box of shattered glass.

Moving across the country can be done without losing your mind, or your shirt. If you’re thinking of taking the plunge, try to give yourself the time to plan logistics, and save up to buy your new furniture. Then do what I did, and throw yourself a series of going-away parties at your favorite bars as part of a grand farewell tour.

Meryl Williams is a Chicago journalist who recently moved to Portland. She loves roller derby, upbeat music with depressing lyrics, and shamelessly ordering the Kids Pack-size popcorn at the movies. She has been known to overshare on her blog.

1. We Did Good, Billfold
2. Question Wednesday
3. What I Learned From Five Years of Writing and Editing for The Billfold
4. How a Program Assistant Dealing With a New Paycheck System Does Money
5. Classic Billfold: What I Wanted From My Move to Portland and What I Got
amtrakmovingmoving-expenses