The Cost of Being Vegan 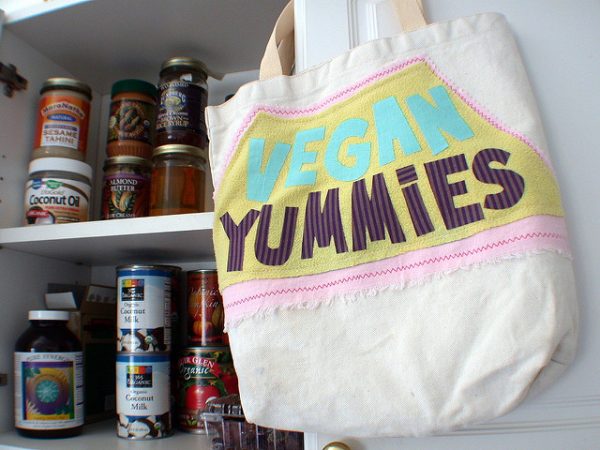 People who give financial advice like to suggest that you go vegan, vegetarian, or at least celebrate Meatless Monday as a cost-cutting measure. As a vegan for two years and counting, this particular tip always makes me laugh.

Yes, rice and beans cost less than meat and cheese. But if you’ve given up meat and dairy products for environmental, health, spiritual, or moral reasons, you probably miss many of the foods that you used to enjoy. And you probably find that the soy/rice/almond/coconut-based alternatives are far more expensive than the real thing.

Here are some costs that I have recently incurred due to being a vegan, according to grocery store receipts:

$2.99: Vegan half-moon cookie. Before I was vegan, I used to buy half-moon cookies for a dollar. Prior to that, they were available for free in my college’s dining hall. I mean, free to the extent that a meal plan was a part of the cost of going to college, which I am still paying for every month.

$4.89: Vegan cheddar-flavored kettle chips. Considering that this is a 5 oz. bag that will probably take me three minutes to eat, five dollars seems…excessive.

$4.69: A single portion of Amy’s vegan macaroni and soy cheese. The version that uses real cheese is $3.69.

$6.99, $9.99, $9.99: Because being vegan shouldn’t prevent you from paying $10 for a pint of artisanal small batch ice cream in flavors like Salted Caramel and Mint Carob Chip.

$7.99: Organic vegan caramel sauce made from dates. I also had the option to buy vegan whipped cream and chocolate syrup, so I was proud of my restraint. (I did spend another $8 on organic maraschino cherries, but that’s because I’m ridiculous, not because I’m a vegan.)

$9.99, $5.39, $10.49: Various nut cheeses. Worth it for the distinct, satisfying feeling of slicing an expensive cheese and placing small slivers of it on expensive crackers, which is so often denied to vegans.

$2.49: Cleo’s Vegan Peanut Butter Cups, aka Reese’s with rice milk. Everyone brought Halloween candy into the office, and I felt sad that I couldn’t eat it.

According to Mint.com, I spend an average of $375 on food each month. Before I went vegan, I insisted on eating only meat and dairy products that were certified humane, hormone-free, grass fed, and locally raised…in other words, extremely expensive. Still, my average food bill was lower: $270 a month. I should point out that I did live in Oregon at the time, and food is cheaper there than in NYC, but it’s not that much cheaper.

So $100, give or take, is what I pay each month to be vegan. In my case, it’s not a choice motivated by concern for the environment, my health, or animal welfare, although all those things are great, too. It’s just because I had horrible cystic acne for 10 years, and giving up all animal products is the only thing that made it go away — not dermatologist-prescribed creams and pills, the oil cleansing method, holistic esthetician-prescribed bentonite clay facials and Manuka honey masks, birth control pills, exercise, water, or weird home remedies involving apple cider vinegar and baking soda.

For $100 a month, I can eat bagels with cream cheese, pizza, ice cream, and peanut butter cups, and still not hate my face. That seems worth it.

Antonia Noori Farzan lives in Brooklyn, like everyone else. She can be found on Twitter and Tumblr.

1. We Did Good, Billfold
2. Question Wednesday
3. What I Learned From Five Years of Writing and Editing for The Billfold
4. How a Program Assistant Dealing With a New Paycheck System Does Money
5. Classic Billfold: What I Wanted From My Move to Portland and What I Got
antonia-noori-farzanbeing-vegan-is-expensivethe-cost-of-things