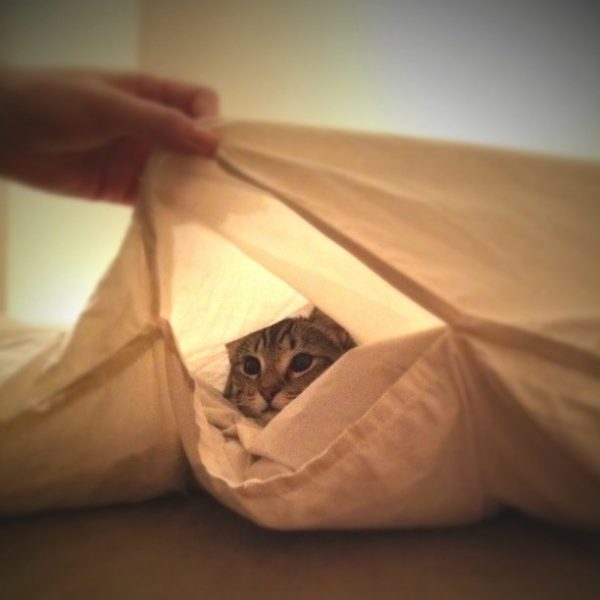 My cat didn’t always have a savings account. But now he does, and it’s not because I’m a crazy cat person, or because I’m saving to send him off to a competitive cat college. I’m convinced it’ll save his life.

Let me explain. It used to work this way: I’d get paid weekly. The necessary monthly bills got paid: electricity, gas, life insurance, and water. Then a big, meaty chunk of my pay, everything minus a bit of fun money, got moved automatically to an online bank account blandly named “My Savings.”

For years I commended myself on my high rate of savings and became obsessed with my total savings amount. When I’d hit a new, higher round number, I’d set it as a new mental floor. “I won’t dip below that amount,” I’d say to myself. When the elbows ripped on a work shirt I had, I said, “eh, I can live with one less shirt.” When the oil change light went on, I said, “what a scam, I can push it another 2,000 miles.” My worldly goods degraded around me while I cheered the ascent of an abstract number on a screen.

In the conversations we have about money, we tend to separate ourselves into spenders and savers, as if one group wears a black hat and the other a white one. But the more virulent strain of compulsive saving, the one I’ve got, can be its own destructive force.

Realizing I had cheaped out on buying a suit for years, I had to go out a few days before a wedding and rush into buying a suit whose cut I liked even less than the non-sale price. On more than one occasion I got a big bill from my car dealership, and when I protested they said, “Well, if we had found this earlier…”

By being obsessed with not spending money, I was spending more money. It made me sadder than it should have to see that number go down. And I could never take that vacation I wanted, because what’s more irresponsible than dipping into savings for a vacation?

The insanity of this approach came to light during one of the money meetings my wife and I had. Basically, she called bullshit on it, and with her help we diagnosed the problem. My savings wasn’t actually savings; most of it was earmarked for life events I tried to ignore until I couldn’t. My savings account was like a fruitcake: a bunch of ingredients unceremoniously thrown together into a gelatinous mess, worse than the sum of their parts.

Our solution was to separate out the ingredients, so to speak, by opening a large number of accounts, which was easy with my online bank. I now have separate accounts for: clothing, car maintenance, home improvement, vacation, Christmas and gifts and yes, my cat.

Having these accounts forced some thinking on my part: how much would I like to spend a year on clothes? On Christmas? Once I came up with the number, I divided by 52 for a weekly pay-in. Some of the numbers are surprisingly low, $5–15 per week, and yet the accounts accumulate money quickly.

With the money built up, I can act instead of react. I use my money to do what in engineering we call preventative maintenance. By spending money today, I save more money tomorrow. And in my new savings account, the money actually stays savings. This, in the end, is what money management is: creating systems with your rational mind to protect against your own personal afflictions, like a wolf man locking himself up before a full moon.

It can be annoying keeping track of the accounts, but most medicines have side effects, and I’ll gladly endure this one. Because someday my vet is going to say to me, “it’s a good thing you caught this early”, and my cat, stretched across the table in that half relaxed, half bored cat way, won’t have any idea how lucky he is.

1. We Did Good, Billfold
2. Question Wednesday
3. What I Learned From Five Years of Writing and Editing for The Billfold
4. How a Program Assistant Dealing With a New Paycheck System Does Money
5. Classic Billfold: What I Wanted From My Move to Portland and What I Got
catsmultiple-savings-accountssaving