The Billfold Goes to the Archives: What Makes a Utopia? 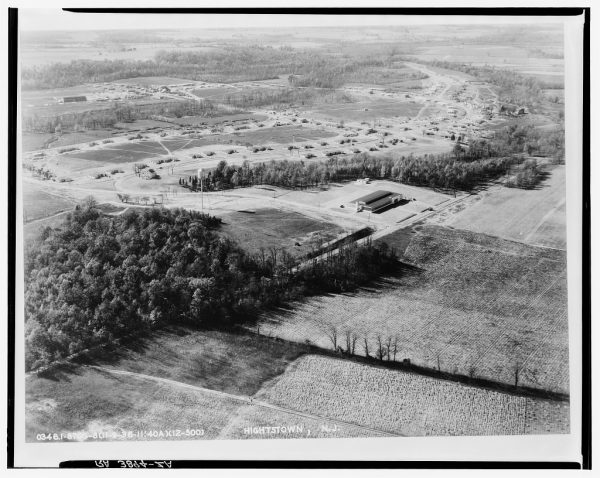 Roosevelt, New Jersey is a small town of fewer than 1,000 people, about 15 miles out from Princeton, the closest town with name recognition. On its face, it seems unremarkable. However, the borough, which was founded as New Deal cooperative settlement in 1936, is part of a fascinating chapter of American history.

Part of the reason that location was chosen was the tremendous influence of Benjamin Brown, a wealthy poultry seller based in the area. He had been inspired by a 1928 visit to Birobidzhan, “Russia’s autonomous Jewish state.” He set up the Provisional Commission for Jewish Farm Settlements in the United States, and successfully applied for a $500,000 award from the Division of Subsistence Homesteads to purchase a portion of what was then Millstone Township, New Jersey. This would become Jersey Homesteads.

The location made a lot of sense. The Hightstown area was rural; this was a time when journalists could credibly describe it as “where the Jersey marshes turn into rolling wooded countryside.” Jersey Homesteads was ostensibly open to all, but the Works Progress Administration (WPA) targeted the garment industry in New York City’s Lower East Side, which was overwhelmingly Jewish. The plan was to combine rural and city living by building housing and a garment factory on a cooperative homestead. (If it grinds your gears that the federal government sunk a lot of money into a social experiment that would by design benefit only a limited group, consider that there are many examples of this throughout American history, for instance banks.) The government provided funding, and the colonists, as they called themselves, put down $500 on top of regular rent. Jersey Homesteads would make money via the garment factory, participating in cooperatives across the country.

The project folded within five years. But there’s still a lot we can learn from it.

Folks reflecting on the experiment today describe Jersey Homesteads as a “utopia” or “utopian experiment” time and time again. (Here’s NPR, Curbed, and the Wall Street Journal, for starters, and a documentary made on the project in the 1980s is titled Roosevelt, New Jersey: Visions of Utopia.) I have also come across some historians referring to New Deal settlements as planned utopias or communal utopias. It makes the whole concept seem very romantic. Here the thing, though: I’m not convinced that its founders and initial colonists saw themselves as pursuing a utopian project. Here are the official goals of the project, per a 1935 press release from the Department of the Interior:

Point #3 is doing some heavy lifting (most groups of people are adapted to community living, no?), but the other two goals strike me as… prudent. The project was conceived as a mechanism to lift people employed in a particular industry out of poverty. This is not the stuff of implausible utopias! It’s just functional society stuff!

Plus, not all of the colonists saw themselves as part of a utopian experiment. After all, they were going from laboring in a garment factory in New York to laboring in a garment factory in New Jersey. Jersey Homesteads’s own newsletter describes it as a “cooperative community.” Certainly, signing up was seen as a way to improve one’s life, but to what extent? In one interview, a woman reports being delighted that her $24 in rent goes further in New Jersey than her $34 in rent in New York — a calculation not very different than many New Yorkers’ today. One man reported, “I earned good wages in New York. What could I afford? [A] three-bedroom apartment in Brooklyn. Now we are used to this life. It is better.” Maybe they were being coy because of the ambition of their project. Or, maybe they just did not see the homestead project as far-fetched, at least not to the extent that we seem to today.

The WPA founded dozens more resettlement communities, few of which still retain their utopia label. In an admittedly unscientific study, I googled “project name + location + utopia” for all 48 settlements on a list put together by The Living New Deal. 39 of them turned up no results that actually included the word “utopia.” Of the remaining nine, it was a mix: a few had been noted in a thesis or academic article that used the word “utopia”; one was Greenbelt, Maryland, which hosts the Utopia Film Festival in honor of its New Deal history; and some were directly from towns referring to their New Deal histories as utopian. Arthurdale, WV got an Atlas Obscura article. Two of the towns, Norvelt, Pennsylvania, and Greenhills, Ohio, are on the latter list because they were covered by CityLab. None have received as much attention in this vein in the past half-century as Jersey Homesteads. No doubt this has plenty to do with America’s uneven media coverage concentrated on either coast, but I doubt that’s the entire story.

So, why does Jersey Homesteads get this treatment? First, I suspect that there’s something about the agricultural element of the experiment that imbues it with a certain mysticism in hindsight. You may have read that Millennials really really love plants. (People have actually always had houseplants, but I guess the twist is that now we have them instead of children?) Also, while we have had urban agriculture as long as we have had cities, there has been a twenty-first century surge of interest in the practice. Much of it is in direct response to pressing issues, like food deserts and changing access to food in the face of climate change — although much of this focus on plants is read as downright twee.

Still, there’s something particularly romantic about these pursuits, mixing urban and rural. Most of the WPA projects were agriculture-focused — they were homesteading projects, after all — but I think that this mix of urban (people coming from New York City, the garment factory) and rural (agriculture) is compelling, maybe more so than other settlements in states like Texas or Ohio or Pennsylvania that are already associated with agriculture or rural life. The government plopped a garment factory and 200 Bauhaus apartments in the middle of a field in an attempt to replicate all of the good things about the Lower East Side with none of the drawbacks, in the earnest hope that the colonists could squarely straddle both worlds. The discrepancy makes a good story.

There may also be a posthumous glow to Jersey Homesteads due to the Jewish nature of the project. For example, George Weller, then a prominent journalist, wrote a 1937 piece on Jersey Homesteads in New Letters in America entitled “Promised Land.” The spirituality that is associated with Judaism makes the project seem utopian in and of itself. Plus, I admit, as a Jew, there’s a real romance to these Jewish enclaves entirely separate from any practice of Judaism. How could I not root for these American colonists, reading their letters and studying their pictures and knowing that across the Atlantic the Holocaust was looming?

A few days after I began researching this piece, I met a girl who was raised in Roosevelt at a post-Pittsburgh community Shabbat. She kindly connected me to her mother, who has lived in the town her entire life. I asked how she had been affected by growing up in such a unique town. She told me that as a child, she thought that everyone was Jewish, until she started at Hightstown High School in 1960s, when the Ku Klux Klan was active in Hightstown, and found that not everyone was Jewish. That sense of safety is something appealing about Jersey Homesteads that has nothing to do with any considerations of income or labor. Clearly, though, it was not sustainable. It didn’t work too well for Birobidzhan either.

People who live in Roosevelt now say it’s a very special place to live. The town takes great pride in its past, in its reputation as an artists’ colony, and in the close-knit community that exists today. But, frankly, we don’t need to keep calling it a utopia. That language makes Jersey Homesteads something fantastical rather than something instructive. We can take these settlements seriously, not as proof that nothing can work, but as evidence that we can try.

Lola Tillie is a history student. She doesn’t know that much about agriculture but she did win a ribbon for showing a pig once.

1. We Did Good, Billfold
2. Question Wednesday
3. What I Learned From Five Years of Writing and Editing for The Billfold
4. How a Program Assistant Dealing With a New Paycheck System Does Money
5. Classic Billfold: What I Wanted From My Move to Portland and What I Got
booksfailed utopiasjersey homesteadsutopias