The Cost of Road-Tripping to the Munster Mansion in Waxahachie, Texas 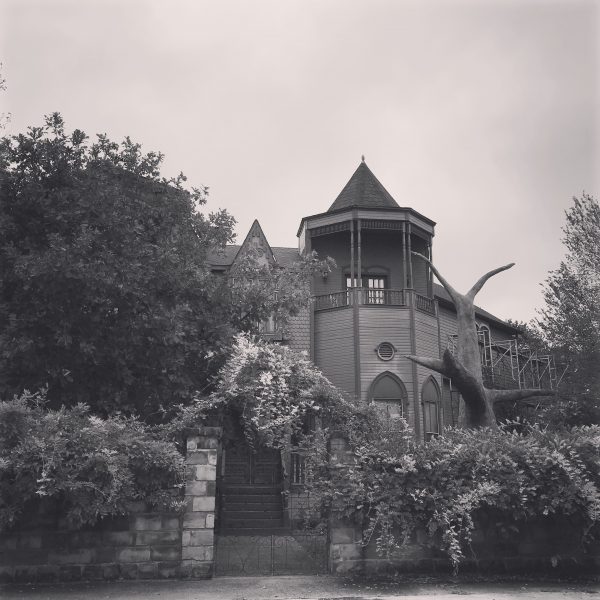 The Munster Mansion in Waxahachie, Texas. All photos courtesy of the author.

When my siblings and I were kids in the 90s and we weren’t quite feeling ready for bed, we’d nestle around our living room and watch the black-and-white or brazen Technicolor reruns of old sitcoms on Nick at Nite. Classics like Green Acres, Bewitched, I Dream of Jeannie, and The Munsters. My memory of these shows feels like a warm blanket: fuzzy and comfortable.

The Munsters was a particular favorite of mine (as was its rival The Addams Family) because I was the sort of kid that loved Goosebumps and Fear Street. The Munsters, a lighthearted and generally sweet family show like The Brady Bunch, was way cooler because it quite literally had monsters. Not only did it have a family of vampires, werewolves, and a Frankenstein monster, it also had an amazing house. Its Victorian mansion was full of spiderwebs, secret passages hidden behind bookshelves, and dusty bottles containing potions and poisons. I wanted to live there.

So, you can imagine my absolute glee twenty years later when I found out that someone had actually built a replica of 1313 Mockingbird Lane in Waxahachie, Texas. The small town of Waxahachie is between Waco and Dallas, about two-and-a-half hours away from Austin: a perfect day trip to ring in the Halloween season.

Because the Munster Mansion replica is a private residence, it is not open to the public. To gain entrance, you need to email the owner in advance to book a tour. Tour groups must be minimum of four people. Thankfully, I know several gothy and fun women whom I was able to recruit for the experience and I reserved a spot.

A few weeks later, we set out on an appropriately gloomy day.

My 2005 Kia Sportage has a 15-gallon tank and could fit all of us comfortably, so it became our Dragula for the day. All told, driving there and back used a tank-and-a-half of liquified dinosaur bones, aka gas. We stopped at Buc-ee’s so that one of my friends could grab some Beaver Nuggets for her boyfriend.

If you’re taking a road trip in Central Texas and you drive by the Czech Stop in West, Texas, you have to stop for kolaches. I don’t make the rules! I got two kolaches with sausage and cheese, one sweet kolache with raspberry and cream cheese filling, and one breakfast pastry to eat the next morning (and they were all delicious). Nothing spooky occurred in West, though we did see an adorable longhorn calf and its mama in a trailer in the parking lot.

Tour of Munster Mansion: $30 per person

Another hour later, we finally exited the interstate and drove through scrubby fields dotted with rain puddles.

“Wow, this is the middle of nowhere,” one of my friends remarked as we traveled down a busy local highway.

Eventually we navigated through an outer gate and a thicket of trees, and there it was. Its heavy oak doors had hand-carved lions, amber eyes ablaze. Eyes trailing up its scab brown walls up to the gables, I was floored to see a bat weathervane. The front yard had replicated the Munsters’ large, barren tree in concrete, its branches reaching up into the stone-colored sky.

Then, the front door to the Mansion creaked open and a petite blonde woman stepped out.

When I found out the price of admission, I’ll admit that I had a little bit of sticker shock. But once we stepped through those lion-faced doors and into the foyer, I was covered in goosebumps — not from fear, but from the sheer scale of the house and the exacting detail within it. Maybe it was when I saw the animatronic dragon under the stairs I realized that building and maintaining the mansion must not be cheap. 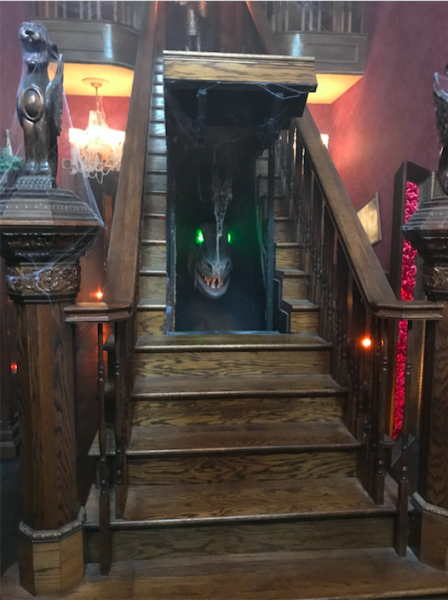 The woman who’d let us in was Sandra McKee. She and her husband Charles started building the live-in art project in 2002 from the ground up. She told us that while the building that was used for the exterior shots of the Munster Mansion still exists, she and her husband didn’t have any blueprints to help them figure out how to construct the place.

“I’m five-foot four and the actress who played Lily was five-foot two,” Sandra explained as she offered to take our picture in the coffin-slash-telephone booth by the front stairs. “So I would count how many steps she took to go from the door to the stair and that’s how we figured out the layout.”

Sandra’s passion for accuracy repeated in each dusty room we toured: the living room, complete with suits of armor and bat-themed record players, a dining room with silver candelabra, and a kitchen complete with working woodstove and dishes used by the cast in the television show.

We asked Sandra how she’d been able to collect so many original pieces, and she laughed. “Oh, I’ve got two guys out in LA and every time something Munsters comes onto the market, they let me know.”

After we left the kitchen (complete with Campbell’s cans of “Cream of Vulture slop”), we ascended a back staircase and went to the second floor, where four different character rooms were located: one for Marilyn, a lab for Grandpa, a dungeon-like hideout for Eddie, and a bedroom for Herman and Lily.

When we were in Lily and Herman’s room, Sandra pointed at a pointedly small antique Victorian bed and told us that she and her husband had slept in it for almost ten years before they’d renovated a nearby building on the property into a new place for them to live.

It was hard to imagine one person fitting in the bed, let alone two. “What was it like living here?” I asked her.

“It was hard to tell which spiders were real and which weren’t,” she responded, as she showed us reproductions of Lily’s pale purple vampire dresses.

After we toured the Mansion, we had a little bit of time to do a quick walk around Waxahachie’s adorable downtown square. There was a flea market going on, so we peeked in to see if we could find anything cool. I got a blue raspberry snow cone from an ice cream truck that had superhero action figures attached to its window.

As we were driving back to Austin, my friends and I were still awestruck by the Mansion, Sandra’s passion, and how amazing it was that her love of this funny old sitcom led to the creation of this amazing life-size fanart.

It was clear from both the memorabilia and the way that Sandra spoke that Lily was her favorite Munster. She had all of Lily’s dresses and had cajoled her husband into dressing up as Herman for their annual charity event year after year. He supported her vision, her passion, and was the Frankenstein monster to her vampire. Would that we all could find our monster like that.

Perhaps it’s not so strange to think about the Munster Mansion as being a monument to love, given the family-friendly nature of the sitcom and the warm nostalgic feelings it evokes for many people my age. As we drove back down 35 towards Austin, listening to the static of the rain just starting to fall, a lull came over the car, familiar as the glow from Nick at Nite, and we fell silent, fuzzy and comfortable.

AprilJo Murphy is a writing coach, editor, and sometimes teacher who tweets opinions about grammar and queso: @apriljomurphy. She lives in Austin, TX with a handsome, loaf-shaped hound dog.

1. We Did Good, Billfold
2. Question Wednesday
3. What I Learned From Five Years of Writing and Editing for The Billfold
4. How a Program Assistant Dealing With a New Paycheck System Does Money
5. Classic Billfold: What I Wanted From My Move to Portland and What I Got
superfanstelevisionthe munsterstravel