The Cost of Swimming in a New Ocean 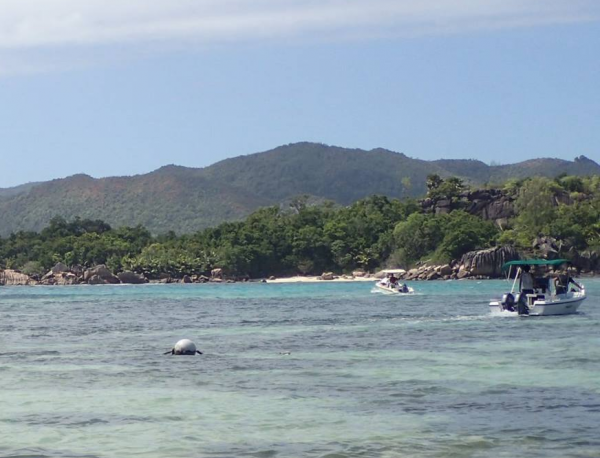 As long as I can remember I’ve been pretty obsessed with the ocean. I was always the kid lifeguards had to drag out of the water because my mom was too scared to come get me herself. (Then why did she bring me to the beach all the time? I’m not a mind reader!) I’ve never lived more than an hour drive from an ocean and, once I graduated from college, it’s been more like under 10 minutes.

When my husband and I got married it was right on the heels of breaking my leg for the second time in under a year, being on disability, and finding a new job. Which is to say we didn’t really have any cash for a honeymoon. We went camping up the coast, on the beach of course, and I became slightly obsessed with the idea that for our fifth anniversary we’d take a big trip. Of course, life happened and it ended up being closer to our seventh than our fifth, but that just gave me more time to dream about it. The idea of swimming in an entirely new body of water was too compelling to ignore. The Indian Ocean was calling to me.

I bought almost everything online, so I can total up the cost honestly. Also, after going through this once I can say that I spent more than I thought before I totaled it all up and it was still worth it.

I read through most of both books and settled on the Seychelles potentially due to pictures of Anse Source d’Argent. October seemed like the best time to go. Not during the main tourist season and not during the rainy season. Plane tickets varied from $900 per person each way (with two stops) to $2,500 each way with one stop. I set up a flight price alert and hoped for the best. We ended up flying through Dubai which could be a post all on its own. 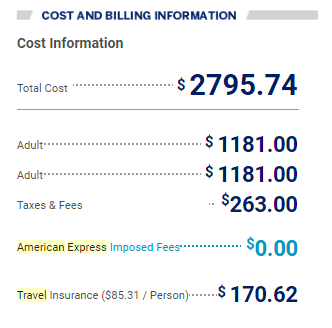 Neat how a $1,200 dollar ticket can really add up like that.

Now we had plane tickets but there was still a million decisions to make. First, which island to hang out on? There’s over 100 islands in the Seychelles but people generally stay on the three biggest. There are smaller islands with private resorts, nature preserves and all kinds of crazy things. I settled on the mellowest, La Digue, for a variety of reasons.

I found a cheap hotel for a week on Booking.com. Soon after making the reservation the owner emailed me to say it would only be 700 euros but to please bring cash. I was 50 percent convinced that I was never going to be heard from, or found in a bathtub with no kidneys or SOMETHING but it was totally fine.

The price even included a delicious breakfast with the best coffee, pictured below. (Not pictured: the hot part of breakfast which was generally an egg and a hotdog. Seriously.) I told my husband I was seriously considering leaving him on the island and taking home the lady who made coffee in the hotel. 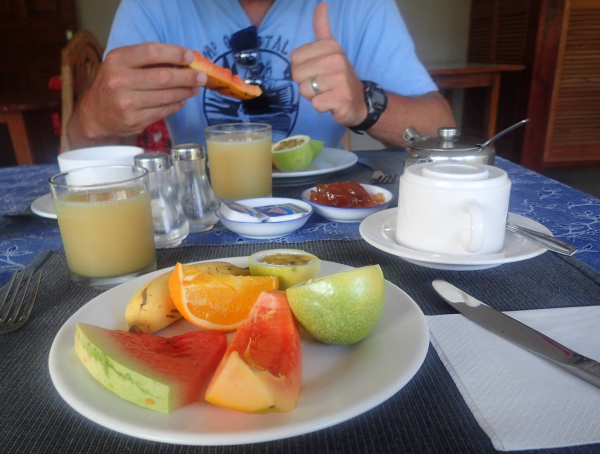 The last thing to worry about was how to get from the island where the plane landed to the island I wanted to stay on. There’s one company that runs a ferry and they claim that you need reservations 48 hours in advance to be allowed to board, but that was not the case. The 54 euro fee for both of us included a shuttle ride to the port. I wasn’t expecting that they’d be waiting at the airport with big signs that said MR. and MRS. “GARLI.” After 20 hours in the air and a six hour layover it confused the shit out of me. My brain was like “huh, there’s another couple here with that name? Oh shit. Oh. No. They mean us. Oh that’s so hilarious. I’m dead.”

Of course everyone else getting off the plane who saw that we had a SIGN then thought I had everything figured out and was a good person to ask about how to get tickets for the ferry. I’m still sad I wasn’t awake enough to take pictures of that moment. Booking.com comments made it seem like everyone was going to spend the entire trip puking off the back of the boat, but it was smooth and easy and I can’t imagine how anyone has ever been sick on that boat. 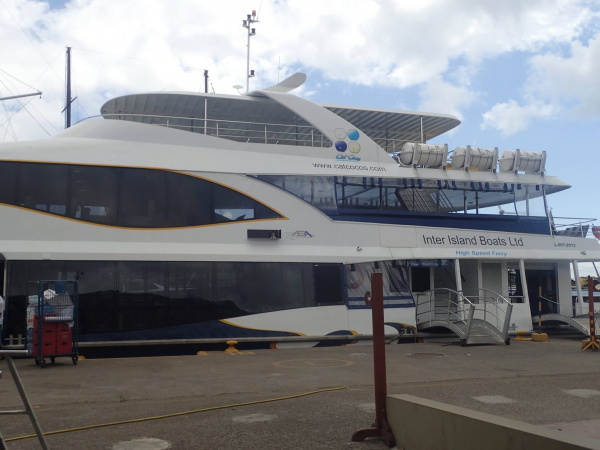 Other things that seemed necessary after reading a million comments on websites:

The hammocks turned out to be the best thing we brought and almost everyone who saw us in them was instantly jealous. It’s hot that close to the equator, even in October, and it was nice to have a place to sleep in the shade. One day we woke up to a guy climbing up the tree we were in to throw down coconuts, so of course we had to buy them from his stand. It was around 5 bucks and that included other fruit juice squeezed on his machete and some local rum mixed in for good measure.

One of the best parts of going to the other side of the planet — we were literally in a 12-hour time difference — was only running into two other Americans the entire time. I read about ten books in a week. There was no news, no internet even though the hotel claimed free Wi-Fi throughout, and my phone didn’t work. We were cut off from reality. Everything felt like an adventure. On parts of the island you had to hike through twisty paths to find the next beach. The way was well-worn and obvious but you were generally alone on these paths so it felt much more exciting than it was. 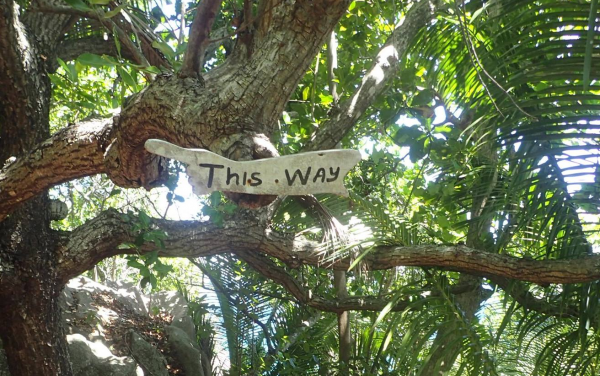 The one other big expense was chartering a boat to go see Curieuse Island, a former leper colony that is currently a giant tortoise sanctuary and national marine park. It’s also one of the few islands that grows the coco de mer palm. The week we were there every tour was going somewhere else but I had my heart set on visiting Curieuse. I wavered when I found it was 300 euros for the day, but my husband was like “I’m not going to spend the next decade hearing about how we flew halfway around the world and didn’t snuggle your giant tortoises.” He was right. It was the best. An old British man that I made friends with by complaining about how people didn’t line up correctly told me he spent 45 minutes watching a giant tortoise eat a banana peel and it was the best use of his time. 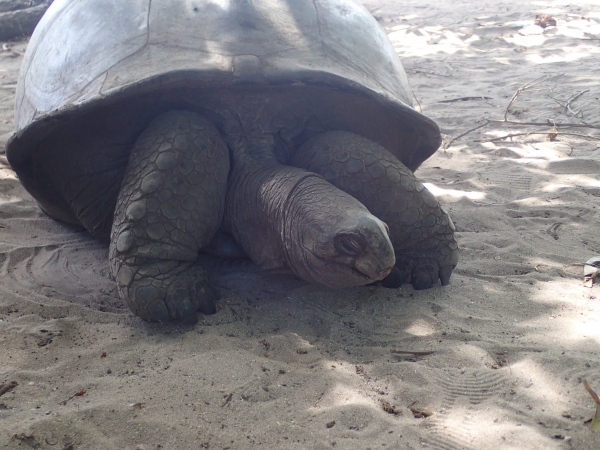 Finally: what did we spend on food? Some dinners were in fancy restaurants with imported wine and around $100 for both of us. Most lunches were more like 10 bucks total or maybe 15 with beer. The lunch pictured here was $15ish and on the beach, which was the best part. 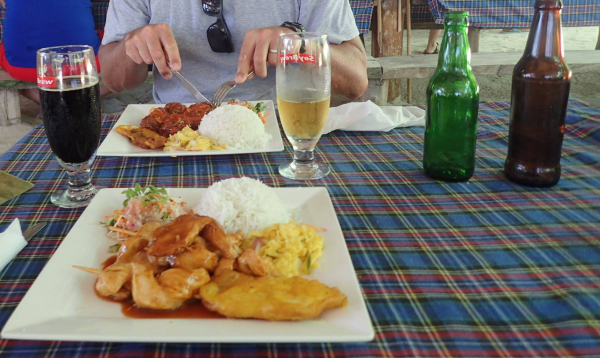 Total spending was $4,343.34 for two people, using today’s exchange rate and not accounting for inflation. It’s unbelievable when you add it all up at once. I didn’t put anything on my credit card except for the plane tickets, and that was just to get points. (I paid the credit card off that month.) So many really cool experiences were had because I wanted to swim in a new body of water. I’d say it was a once-in-a-lifetime trip, but I hope it isn’t — I would go back in a second.

garli knows that talking about queues is a foolproof method of making friends with British people. Try it anytime, anywhere.

1. We Did Good, Billfold
2. Question Wednesday
3. What I Learned From Five Years of Writing and Editing for The Billfold
4. How a Program Assistant Dealing With a New Paycheck System Does Money
5. Classic Billfold: What I Wanted From My Move to Portland and What I Got
always buy the hammockexperience seriestravel