How a Golden Girls Coloring Book Changed My Life 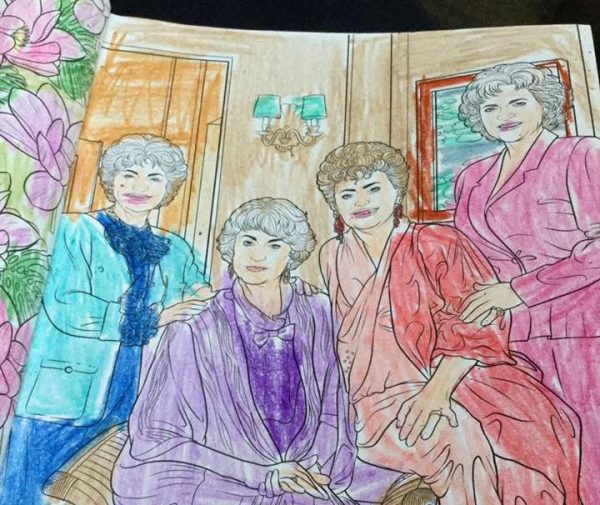 Colored by the author.

Last year I was going through a terrible time. I was suffering from writer’s block. Usually, when I thought of writer’s block, I thought people were overdramatizing. Writer’s block? Uh-huh, sure. There’s no such thing as writer’s block! But when it hit me, it was awful. I was dry.

It happened at the end of graduate school. It was my first year, and I was emotionally and physically exhausted. Every day, I’d sit at my desk and write something. Anything. Then I got blocked. I’d sit and look at the white screen and think I should be typing, I should be writing, even if it’s bad at least I get my words down, but this time, nothing. I was also dealing with red tape issues at my school due to my disability which left me depleted. There was something wrong with the heater in my building so it would be about eighty degrees in my room while it was seventy-something outside. I was fatigued, exhausted, out of it, and just plain out tired. I felt like Lili von Shtupp on Ambien.

I came home to California and slept for a day. When I sat at my computer, I thought I’d go back to normal. I didn’t. I still couldn’t write.

A week after I came back, my birthday arrived. I decided to go to Target and get a treat for myself. I found a new pair of shortie pajamas, then a Snickers cake. I headed towards the books section. Displayed prominently was an adult coloring book featuring — of all people — the Golden Girls. I looked at it for a moment. The Golden Girls had their own coloring book? Well of course they did! They were more popular now than they were in the eighties! Something inside me thought: Buy it. Buy it right now. The book landed in my cart with a little plop. I didn’t think twice when I spent twelve dollars and ninety-nine cents on it, plus seven dollars on a box of 126 Crayolas, complete with a sharpener.

I was going to send the book and coloring pens to a friend who can quote Golden Girls dialogue by heart. I liked the idea of adult coloring books but knew they weren’t for me. I have two fun-filled disabilities that affect the left side of the brain: Nonverbal Learning Disorder (NLD) and Central Auditory Processing Disorder (CAPD). Both of them influence my fine motor skills, meaning handwriting (ironic since I was a writer), using scissors, folding clothes, and coloring. I’ve managed to cope through the years, but when I was a child, coloring was a struggle.

As a little kid, I loved to color, loved picking out crayons. Yet I could never stay inside the lines. While everyone else in my class had super keen motor skills, their pictures looking very neat and pretty, mine sounded like Janis Joplin’s voice: raw, ragged, messy, and not for acceptable company. I had teachers go into near rages, upset I couldn’t stay in the lines. The criticism left its mark. I felt as if I disappointed everyone, so I stopped coloring.

However, there were Dorothy, Rose, Blanche, and Sophia. Sophia was saying “Jennifer, picture it: June 2017. You’re forty-five years old. You need to color us.” Rose said “Back in St. Olaf, I never colored inside the lines. I mean, where’s the fun in that?” Dorothy said “Stan always colored inside the lines. He just was that type of person.” Blanche said “Coloring books, what’s that again? I had a Little Lulu coloring book, she was the one that got all the boys. Jennifer honey, you paid eighteen dollars for us and crayons. The least you can do is color us, honey.”

So I did. The pictures were far from perfect. I did color outside the lines, but I learned to correct some slips. I had problems with lips (they all looked like they had little red mustaches) but I kept going. I colored cheesecakes yellow. I used a rose-colored crayon for Rose’s dresses. The peach crayon became a little nub because I used it so much.

Suddenly I looked forward to coloring every day. It honestly made me feel better. It reminded me again how much I loved coloring as a child before teachers ripped me apart. Two weeks into it, I took a chance. I posted the pictures on Facebook and Instagram. I said I knew I colored outside the lines, that they weren’t perfect. But I was proud of them. I received an outpouring of support, with people saying how good they looked. One of my best friends noted that lips were hard to color, even if you had excellent fine motor skills.”Here’s to red mustaches!” she exclaimed.

Yet it was my friend’s husband who said something that made me think. “Jennifer, the teachers weren’t trying to teach you when they told you to stay in the lines. It was about control. They wanted to control how you colored.”

Damn it all, that made me cry. And I knew the writer’s block wasn’t really a block. It was about control. I couldn’t control anything during those last weeks of school. I couldn’t control my environment, I couldn’t control the heat in my building. I couldn’t manage the red tape problems I kept on having with the administration. I was also doing workshop after workshop after workshop. I felt like my writing was being put through a grinder and there was nothing left. I was tired of overcontrol. I was tired of things happening to me. No wonder I was tired and couldn’t write. Compassion and empathy bubbled inside me. I sat down, and the blank page didn’t scare me anymore. I colored terribly, but committed myself to making bad art every day. Let’s get on it, shall we?

When I returned to school, I was well rested, ready to keep going. I had finished The Golden Girls coloring book, then filled up several others. I’d also written fifty pages of my upcoming thesis, plus revised several chapters I’d started in workshops the year before.

What did I learn, from coloring outside the lines? Just because you’re not perfect at doing something doesn’t mean you shouldn’t do it. God knows I will never have neat, tidy pictures. But now I have an MFA degree proudly displayed in my grandma’s hutch. I have a memoir and a collection of essays I’m getting ready to show to agents. I had to let myself do something terrible to do something well. Incredibly odd, but I’m sure the girls would understand.

Thanks, ladies, for convincing me to invest that eighteen dollars. And for being friends, pals, and confidants. Have some cheesecake on me.

Jennifer Kathleen Gibbons has been published in Salon, Stereo Embers, and the anthology Chicken Soup for the Soul: The Empowered Woman. She lives in Central California and is writing a memoir and an essay collection.

1. We Did Good, Billfold
2. Question Wednesday
3. What I Learned From Five Years of Writing and Editing for The Billfold
4. How a Program Assistant Dealing With a New Paycheck System Does Money
5. Classic Billfold: What I Wanted From My Move to Portland and What I Got
and the card attached would say thank you for coloring usexperience serieshobbieslife-lessons