The Cost of Adopting a Dog 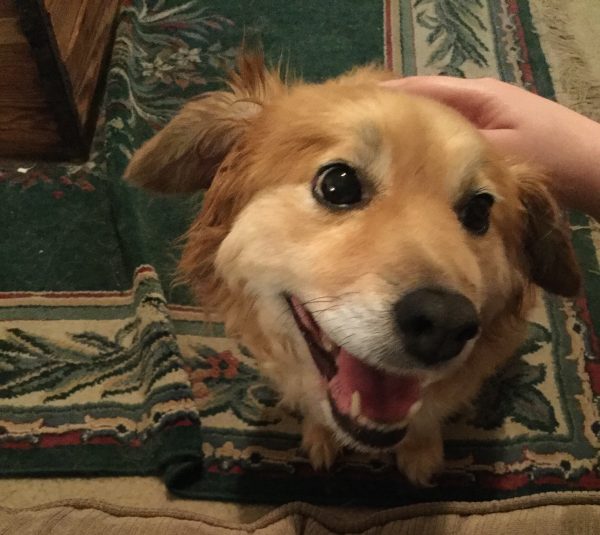 I’ve been waiting for years for destiny to bring me a dog.

You have to understand that in my family, we seldom acquire pets on purpose. Mostly they just show up, and we keep them because we are soft-hearted pushovers. Though I’ve had cats, a rabbit, and a mouse, I’ve somehow avoided ever having a dog of my own, and I’ve craved one for years. I was always much too poor, however, to justify getting a dog on purpose. Deep in my heart, I believed one would show up all the same, gifting itself to me in a way I wouldn’t have to excuse to anyone else.

Two weeks ago, my destiny dog showed up, though not quite in the way I anticipated.

My apartment complex announced a dog adoption event — anyone who adopted a dog from the local shelter that month would have their $350 pet fee waived. I’m in a better place financially than I have been in years, and I began seriously considering the prospect… but I dithered about it. Even without the fee, could I really afford a dog? Did I really want the disruption to my life? Would it really be the right decision?

Destiny intervened. One night I dreamed I went to the shelter and adopted a small blonde-colored dog, a middle-aged female whose name started with a D. Upon waking, I checked out the shelter’s website.

And there she was. Small, blonde-colored, middle-aged, female. Her name was Dolce. She was my dog. Less than 48 hours later, I was leading her out of the shelter and loading her up in my car.

Dolce needed to go to the vet first thing. Though she was already fixed and caught up on her shots, shelter staff had recently diagnosed her with an ear infection that they’d not yet had the chance to treat.

Also of some urgency was the acquisition of food, a leash, a comb for her matted fur, and some toys for her to play with.

I took Dolce to the front office at the apartment and got her added to the lease. The pet fee was waived, as I said — but the pet deposit was not, nor the “pet rent” that would be added to our monthly bill.

I was lucky in terms of other supplies. I could cobble together food and water bowls from what we already had, at least in the short term; Dolce already had a collar; one of my sisters was willing to give me a dog crate she wasn’t using, and another sister gave me an old couch cushion to put inside it.

The crate, you understand, was a necessity, because in her crate Dolce could find it in herself to restrain her bladder. Otherwise, left to her own devices, Dolce would relieve herself anywhere and everywhere. Even before getting her to the vet, she had a couple of accidents. Once they put her on prednisone — notorious for causing excessive urination — the accidents got worse. On her fourth day as my dog, despite frequent walking, she peed on my carpet five times.

I took Dolce off the prednisone for the sake of my sanity. The accidents continued, though at a slower pace of only once or twice a day. I took her back to the vet, where they diagnosed a urinary tract infection, and also weren’t entirely pleased with the progress of her ear infection.

That second vet visit proved to be a turning point. I’d been at my wits’ end with the constant clean-up, and was becoming increasingly frustrated with Dolce; now I understood that she was sick and couldn’t help what she’d been doing. Dolce, who finds the vet very stressful and perhaps too reminiscent of the shelter, leaned on me for support during the exam, the first sign of any major attachment on her part. Since then, both the pee-pee problem and our relationship have improved dramatically.

With the addition of a rubber chew toy and a little bag of training treats ($10.79), I bring you:

Not that that’s the end of the expenses, of course. In addition to the ongoing costs of food and pet rent, there’s also at least one more vet visit in our future, to make sure Dolce’s infections are gone. She’ll need real food bowls at some point, and I’d love to get her thick, curly coat properly washed and groomed, once she’s done getting her ear drops matted in her coat every day. If I can possibly afford it, I want to sign us up for training classes, so we can learn to better understand and communicate with each other.

If you had asked me two weeks ago, “can you afford to spend almost a thousand dollars on a dog?” I would have said absolutely not. My savings have definitely taken a hit, and my lifestyle might still. I’m making it work, though. And when I look down at Dolce, sitting on my foot to ask for pets or shoving a slobbery toy into my lap, I can’t doubt that I made the right decision. When destiny sends you a dog, you take care of her, whatever the cost.

Elizabeth Belyeu lives in Texas for some reason, where she’s doing pretty well for herself and working on her next novel. You can find her two published works, Secondhand Shadow and Ice & Smoke, on Amazon!

1. We Did Good, Billfold
2. Question Wednesday
3. What I Learned From Five Years of Writing and Editing for The Billfold
4. How a Program Assistant Dealing With a New Paycheck System Does Money
5. Classic Billfold: What I Wanted From My Move to Portland and What I Got
dogdog adoptiondogspetsthe-cost-of-things