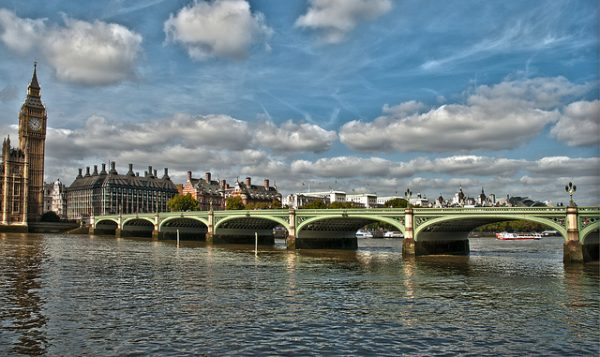 Travel ain’t cheap — but it doesn’t have to be expensive, either. I recently spent three days in London with a predetermined budget of £100. (This number did not include my round-trip flight, which cost £80.) While London is known for being a pricey tourist destination, I was able to stretch my dollar — or pound in this case — to make every penny count.

My life is a bit of a whirlwind right now. I am currently living and working in northwest Italy for three months teaching English at a high school. My weekdays are spent in a small town surrounded by a foreign language and culture. My weekends are spent living out of a backpack, walking miles on end around new cities, greeting new faces in different languages and trying to decipher unique accents, and hopping on planes, buses, and trains. It’s quite exhausting, but I think it’s worth it for the cultural enrichment.

Temporarily living in Europe, of course, makes traveling around the country easier and less expensive than it might be if I were living back home in the States. So I am taking advantage of the travel opportunity while I can. My teaching job, however, is a volunteer position. Without regular pay, my travel budget is pretty tight — and every weekend trip requires thought, planning, and thorough budgeting.

The closest major cities with airports are Turin and Milan. Flying out of Milan is typically cheaper because it is a larger city and bigger travel destination. For my trip to London, I started monitoring flight prices on Hopper four weeks in advance — but although I use a lot of travel and flight apps, I never book through them. Instead, I book directly with the airline because it saves money (the app adds a surcharge to the flight price) and was able to book a flight for just £80 ($113.50).

A flight for a little over $100 to London is not that bad, but I knew that I couldn’t spend much money while in the city itself. So I set a budget for food, accommodations, and entertainment for my three-day trip at a grand total of £100 (about $142). My arrival flight landed in London at 11 a.m. on Friday, and my departing flight left at 7 a.m. Sunday. I had 44 hours to explore and only £100 to spend.

For travel around the city, I purchased an Oyster Card for a £5 up-front free that you get back when you return the card. The card is reloadable and allows you to take both the Tube and the overground metro system at a discount. Each trip is only a couple of pounds with the card. Without the card, you could easily drop £10 on a single round trip.

I was able to save money on lodging by working my network, i.e. couchsurfing. I asked someone I knew in Ireland for advice about traveling to London. Turns out, she was traveling to London as well — and I was able to stay with her and one of her friends for free. Of course, not everyone has a friend (or a friend of a friend) in London to stay with at no cost. In case my free accommodations fell through, I had a backup plan to stay in a hostel outside the city, which would have cost me £15–£20 each night.

I was able to stay my first night with my friend’s friend free of charge. This saved me the cost of a hostel or more expensive hotel, as well as the cost of taking a bus to get back to the city. The second night I stayed out all night, and I went straight to the airport (in the wee hours of the morning) to avoid getting a room.

Next on the list of priorities was food. By the time I landed in London, I was pretty hungry. For lunch on Friday and Saturday, I spent less than £10 a meal, and I chose food that I could eat on the go. Sitting down usually means ordering a bigger meal and something to drink. I brought my own water bottle, which I refilled at restaurants and fast food chains for free.

I also packed a ton of dry snack bars that I could eat throughout the day to curb my hunger. My budget each night for dinner was £15–£20, and before leaving for London, I did a quick Google search of cheap eats in the city and jotted down the list in my travel journal. I did not eat at any five-star restaurants, but I was able to get some classic English dishes on the cheap, like fish and chips. Food is a great way to encounter a city.

I also researched all the free activities, museums, and festivals going on in the city. Saturday was St. Patrick’s Day, so it was a perfect weekend for free music and festivities. I spent a lot of my time walking around the city and sightseeing to catch a glimpse of the big tourist attractions, i.e. Westminister Abbey, Big Ben, Buckingham Palace, and the London Eye. I also visited the British Museum and the National Gallery, which are both free!

My time in London was exhausting, but well spent. Maybe one day I’ll go back and experience the city on a five-star budget, but even with just £100, I was able to see and experience the rich history and culture London has to offer. I don’t feel my budget made me miss out on anything. Instead, I think traveling on a budget has forced me to learn to take everything in, utilize every moment, cherish every sip of coffee, and appreciate every free drink or pillow. Traveling on the cheap has taught me to take it all in and enjoy.

Stephanie Taylor, affectionately known as Stevie, is a two-year LA transplant who has lived in New York, Minnesota and Oklahoma. When she is not writing, you can likely find her in a yoga studio or training for a race.

1. We Did Good, Billfold
2. Question Wednesday
3. What I Learned From Five Years of Writing and Editing for The Billfold
4. How a Program Assistant Dealing With a New Paycheck System Does Money
5. Classic Billfold: What I Wanted From My Move to Portland and What I Got
londonmy last 100 bucksmy last 100 poundstravel