Will Crowdfunding Save Toys “R” Us? 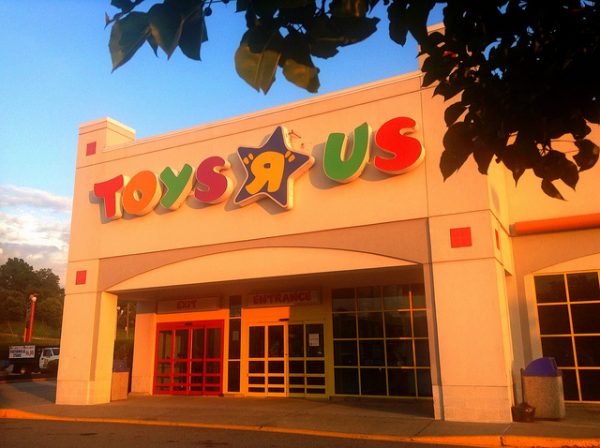 By Billfolder request, here’s the latest update on the Toys “R” Us story:

You might remember that, earlier this year, we looked at whether Toys “R” Us was losing money due to Millennial parents doing more of their shopping on Amazon. However, when Toys “R” Us announced that it was shutting down all 735 of its U.S. stores (and laying off 31,000 workers), it quickly became clear that Millennials weren’t the ones responsible for the store’s demise.

As The Week explains, in an article titled “How Vulture Capitalists Ate Toys “R” Us:”

After big success in the 1980s, Toys ‘R’ Us’ performance turned lackluster in the 1990s. Sales were flat and profits shrank. Toys ‘R’ Us was a public company at the time, and the board of directors decided to put it up for sale. The buyers were a real estate investment firm called Vornado, and two private equity firms named KKR and Bain Capital. (You may remember the latter from 2012 campaign ads: It was co-founded by former Republican presidential candidate Mitt Romney, though he’d moved on well before this.)

The trio put up $6.6 billion to pay off Toys ‘R’ Us’ shareholders. But it was a leveraged buyout: Only 20 percent came out out of the buyers’ pockets. The other 80 percent was borrowed. Once Toys ‘R’ Us was acquired, it became responsible for paying off that massive debt burden, while also paying Bain Capital and the other two firms exorbitant advisory and management fees.

Even though Toys “R” Us was still bringing in 20 percent of all toy sales in the country, it couldn’t pay off its debts and had to shut down. Read the entire article to decide for yourself whether Bain, Vornado, and KKR knew that would happen and a) planned for it or b) didn’t care.

But Toys “R” Us might live again, thanks to a toy CEO and a GoFundMe campaign. From the AP:

Toy company executive Isaac Larian and other investors have pledged a total of $200 million and hope to raise four times that amount in crowdfunding in a bid to save potentially more than half of the 735 Toys R Us stores that will go dark in bankruptcy proceedings.

The unsolicited bid faces a number of hurdles like finding other deep-pocketed investors, as well as getting a bankruptcy judge to approve such an unusual plan. It is the first known plan to keep the Toys R Us brand alive.

Issac Larian is the CEO of MGA Entertainment, Inc., which created the Bratz and Little Tikes toy brands, among others. As of this writing, the GoFundMe has raised $200,047,938 from 1,572 people in four days. [Update: turns out $200,000,000 of that came from Larian and his investors, which is currently the project’s highest donation.]

So. Is Toys “R” Us going to be saved through the power of crowdfunding? If this plan works, will future CEOs ask the crowd to help them keep their companies alive? I can’t exactly fault them for this, since that’s what we did at The Billfold — thank you for your Patreon support ❤︎ ❤︎ ❤︎ — but it feels a little different when it’s Toys “R” Us, probably because customers were already supporting the store through their purchases. We gave the store 20 percent of our toy dollars, and now a CEO who wants to make sure he doesn’t lose toy sales is asking us to pay even more.

What do you think?

1. We Did Good, Billfold
2. Question Wednesday
3. What I Learned From Five Years of Writing and Editing for The Billfold
4. How a Program Assistant Dealing With a New Paycheck System Does Money
5. Classic Billfold: What I Wanted From My Move to Portland and What I Got
ceoscorporationscrowdfundingretailtoys