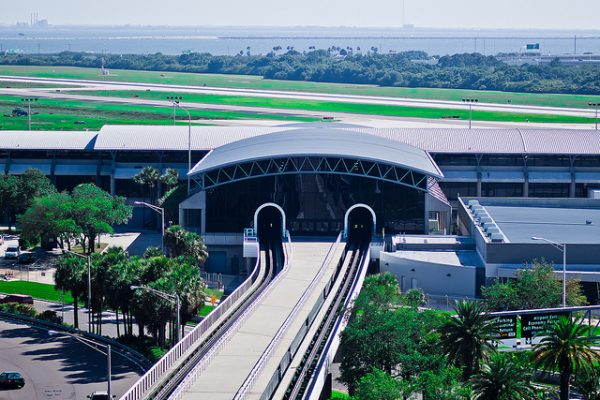 We have a lot of POD NEWS this week, and I’ll start with the best news first: both the Tucson International Airport and the Sarasota-Bradenton International Airport have installed Mamava lactation pods. These two airports aren’t the only ones to offer private spaces for breastfeeding, pumping, and infant care; this article from Working Mother lists fifteen airports with private lactation rooms or pods, which… well, there are over 5,000 public airports in the United States, so fifteen is both a good start and a very small number. [Update: only about 400 of those airports are what we’d think of as commercial airports, and it looks like more than 15 airports offer Mamava pods.]

Next up: I’m sure you heard that a self-driving car hit and killed a pedestrian in Arizona this week, and if you go to Reddit’s Bike Commuting forum you can read a really interesting discussion on how it was the lack of safe, available crosswalks, not the self-driving car, that caused the accident — there’s a trail on either side of the multi-lane road, but no way to get across without making a lengthy detour to a crosswalk, so cyclists often jaywalk their bikes across the road (as this woman had done). Anyway. The point is that Britain is also testing self-driving vehicles, which they call pods, with similar concerns about safety:

In theory, the big white line painted down the middle of the tarmac on Olympian Way separates pedestrians and cyclists. In reality, as everyone knows, people and cyclists alike go wherever they please. The Gateway consortium has coped well with that, with the pods being programmed to stop a good 20 feet (7 metres) away from marauding folk – while still being able to keep driving as cyclists whizz past, feet away from the vehicle on a non-collision trajectory.

On a totally different topic, startup rOcean wants everyone to get excited about water pods: essentially, you connect a Sodastream-esque machine to your sink, tap water filters through the machine, and rOcean water pods add delicious flavor! Although rOcean is making a big deal about how these pods are re-usable and non-proprietary (unlike certain juice startups, rOcean doesn’t care if you fill your empty water pod with Kool-Aid and stick it back in the machine), part of me is like “water filters and flavor pouches are already a thing, just go to your grocery store.”

Lastly: Tide got sued, but not for creating pods that look like candy; instead, the class-action lawsuit is about Tide Pods staining people’s clothing, a topic that we covered in a previous This Week in Pods installment. I wonder if Tide is wishing it had never developed laundry pods.

1. We Did Good, Billfold
2. Question Wednesday
3. What I Learned From Five Years of Writing and Editing for The Billfold
4. How a Program Assistant Dealing With a New Paycheck System Does Money
5. Classic Billfold: What I Wanted From My Move to Portland and What I Got
airportsI had no idea there were over 5000 public airports in the US I figured there'd be like 500podsself-driving-carsstartupsstop trying to turn basic things like making juice or cookies into single-task smart machines because nobody has that much counter space