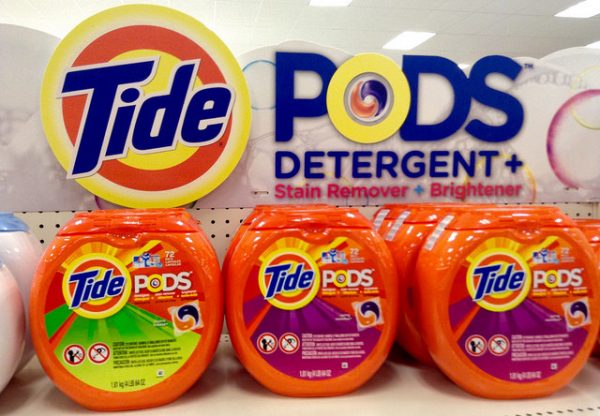 So I know I’ve been seeing that “why you subconsciously want to eat Tide Pods” explainer going around Tumblr for at least two months, but the Eating Tide Pods meme didn’t really hit critical mass until just recently — along with the posts reminding you to never, ever eat a Tide Pod because just biting into one can severely damage your esophagus.

Also, you could die.

Now that we’ve gotten that out of the way, let’s look at the other Tide Pod news of the week: Becca Laurie, at The Outline, explaining what happened after she realized that partially dissolved Tide Pods were staining her clothing.

I responded and told them I found a $10 gift card to be an inadequate response to my problem — the box of pods alone cost $14 — and I would like to know what else they could do for me. This time, a representative named JoAnna responded and told me to spot treat the stains with isopropyl alcohol, a suggestion that seemed extreme. Why not just wash your entire wardrobe in rubbing alcohol? But I tried it. Surprising nobody, it did not work. I reported this to Tide and they said I had two options: the first was to take a $30 gift card as a “good will” gesture and the second was to open a “DAMAGE CLAIM” (caps theirs).

The piece looks at why laundry pods are less cost-effective for consumers (we can’t choose how much detergent to add to our machines, for starters), why we use them anyway, why Tide Pods don’t always dissolve, and what happens when you open a DAMAGE CLAIM with Tide.

1. We Did Good, Billfold
2. Question Wednesday
3. What I Learned From Five Years of Writing and Editing for The Billfold
4. How a Program Assistant Dealing With a New Paycheck System Does Money
5. Classic Billfold: What I Wanted From My Move to Portland and What I Got
don't eat the tide podspodsthis week in podstide pods