The Billfold
finding calm in the chaos

My Bathroom Was My Sanctuary 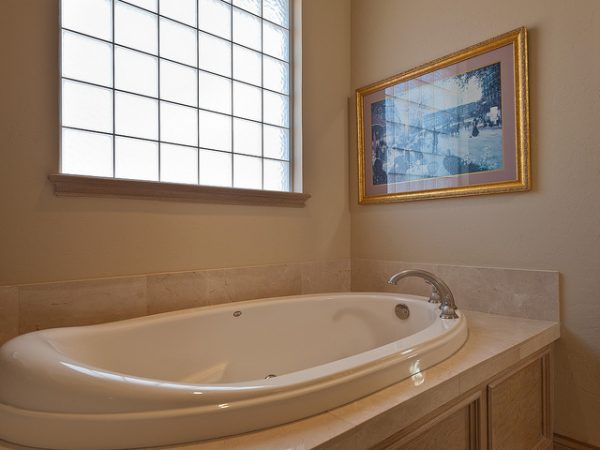 When I moved, my bathroom became my sanctuary. Sinking down into a deep, hot bath and turning on the jets was a centering experience. The ritual of running the water, pouring myself a glass of Perrier (I rarely drink), choosing a book in case I felt like reading… it was a luxury I’d never had before.

Which is why the first bath I took in my new bathroom didn’t feel right. I felt like I didn’t deserve it, that it was too good to be true. The morning after that first bath, with still a lot of moving to do, I accidentally told a friend we had to “go back to the hotel,” because at that point, that’s what it felt like — a vacation, not my very own oasis. I didn’t realize just how important this bathroom would be during our move.

My partner and I were unexpectedly unable to renew our lease because our landlord wanted to do construction on our unit, and we’d learned from our previous move just how much moving can cost: an extra month of rent for breaking a lease ($950) plus a month of rent for the realtor who found a sub-letter for us ($950). Plus first month’s rent and the security deposit for the new place ($1,250 x 2). Money was tight that year. I often wonder how much we would have saved up if we hadn’t had to break that lease because of a 24/7 chainsmoker moving in below us.

There was no extra money to hire movers for that initial move, so we moved ourselves and swore we’d hire movers next time. But we weren’t planning to move again for a while, so when our landlord announced the construction project, we didn’t have anything saved up. I was in the final months of writing my MFA thesis and my partner worked full-time so we didn’t have the time to move, either. We didn’t have to break a lease this time, but we ended up finding a slightly cheaper place a couple miles away with a month of lease overlap — which meant we still had to pay rent on two places for one month ($1,100 + $1,350, since that initial $1,250 rent had gone up since we first moved in).

We did everything ourselves with very little help. We moved from a two-bedroom with lots of storage space to a one-bedroom with tiny closets. We had to get rid of a ton of stuff, but wanted to sell some of it for extra cash. In order to go through everything, we needed to move it to our new place and sort it into “donate” and “sell” piles.

I know what you’re thinking — why did we have to take all that extra stuff with us when we had that overlapping month for things like this in the first place? Couldn’t we have kept it in the old apartment and sorted it there? Well, we’re procrastinators. My partner and I spent the first week of our new lease moving things in, but then we got lazy and put things off — I kept writing my thesis instead of packing — and we ended up needing an extra three hours to get the last of our stuff out of our old apartment on the final day of that lease, which was a little embarrassing.

Once we were fully moved in to our new apartment, we realized just how much stuff we had accumulated. This new unit was smaller, but nicer. It had an open floor plan, and a large granite counter separated the kitchen and living/dining room area. It had a dishwasher, an in-unit washer and dryer (our first ever!), and for some strange reason, one and a half bathrooms. I’d rarely seen apartment listings for two-bedrooms with more than one bathroom and I’d spent a lot of time reading apartment listings.

If there was one feature that completely sold me on our new place, it was that master bath. First of all—what? I’d be living in a smaller apartment in a cheaper part of the city and I’d have a master bathroom? And it’s huge! It has two sinks and marble tiling — and the bathtub! It has jacuzzi jets. I fantasized about relaxing in this bathroom from the moment I saw it. I had lived for two years in an apartment with only a shower.

It took months for us to unpack and get rid of all the extra stuff once we moved in. Because of the lack of closet space, everything was just… in the middle of the apartment. My anxiety flares when I’m surrounded by clutter and disarray and sometimes my depression keeps me from cleaning. It can become a vicious cycle and I don’t know how I would have gotten through that move if it weren’t for the bathroom. It was the first room I scrubbed clean during the moving process, and the first night we stayed at our new place, it was the cleanest, most clutter-free space in the apartment. It was nice enough that my partner set up our small TV and the Wii U system on the bathroom counter. I dug my electric candles out of a box. While I soaked in my first real bath in at least a year, he sat on a pillow next to the tub and played a video game. We had some wine. And Doritos. At some point, I said, “this doesn’t feel real.”

While the rest of our apartment was total chaos, our bathroom was our escape. We didn’t allow any evidence of moving in the bathroom and kept it free of stray laundry. We added purple bulbs to the two lights above the shower for maximum spa-like atmosphere. We set the rule that we couldn’t bring phones into the bathroom. Every single night I took a luxurious bath while my partner played games next to me (often, with the cat on his lap). Sometimes he joined me in the bath and sometimes we watched TV if I was willing to forgo the bathtub jets.

The television and WiiU made it to the living room eventually, but the bathroom is still my favorite place to unwind. My partner and I spent two weeks with family over the holidays and by the time we got back to our place and I heard the sound of the water run in my bathtub, I immediately relaxed. Cue the purple lights. I was home.

Nicole Guappone lives in Chicago and has been previously published by Rolling Stone, Glamour, The Rumpus, The Establishment, and more. She is a contributor at Rebellious, a Chicago-based feminist magazine.

1. We Did Good, Billfold
2. Question Wednesday
3. What I Learned From Five Years of Writing and Editing for The Billfold
4. How a Program Assistant Dealing With a New Paycheck System Does Money
5. Classic Billfold: What I Wanted From My Move to Portland and What I Got
a bathtub is better than a shower stallbathroommovingmoving seriesrenting