A Friday Chat About Laundry and Apartment Culture 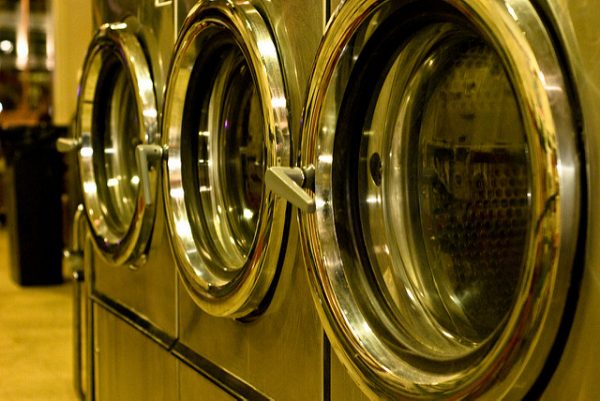 COURTNEY: Yes! Happy Friday! This is your first full week in the new place, right?

COURTNEY: Ahh, well congrats! Is it starting to feel less like The New Place and more like home?

NICOLE: Sort of. I still don’t have any of the furniture I ordered from Furniture Row in November, and it is officially MID-DECEMBER now. Literally the middle day!

NICOLE: But some parts of it are feeling very homey. I love my bed and my kitchen and my bathroom and the in-unit laundry.

COURTNEY: I am SO jealous of your in-unit laundry. There’s currently a crisis in our building because the LAUNDRY-CARD-REFILL-MACHINE IS DOWN and they think it’ll be a while before it’s fixed. (I discovered this, naturally, after putting a load in the washer and realizing my card had a $0 balance. Had to rely on the kindness of a neighbor to get my clothes dried. I bet you’re so sad you won’t get to experience such exciting communal-laundry drama!)

NICOLE: Can you use quarters as a backup, or is it card only?

COURTNEY: Card only! And I mean, I knew I was about to run out of money. I just hadn’t accounted for the possibility that “run downstairs with a $20 and refill it” would be an impossible task.

COURTNEY: Seriously. Plus I’m leaving town in (counts on fingers) four days, so I’m going to try not to wear anything I want to pack, juuust in case.

NICOLE: I don’t want to presume anything about where you’re going, but hotels/Airbnbs/parents’ houses often have laundry, thank goodness.

COURTNEY: Haha, yes, spouse and I are visiting parents, so we may pull the old “hey, we brought our dirty clothes!” trick for the first time in a while. At least we have an excuse besides flagrant immaturity, haha.

NICOLE: I never brought a bag of dirty clothes to my folks, but I was always glad to wash what I wore during the visit before I left! It would save me at least $5 bucks in laundry quarters.

COURTNEY: Have you been getting to know your new neighbors? All my Chicago buildings had a culture of “nod at each other in halls, otherwise leave alone” which I’ve sort of internalized, but during Laundry Emergency 2k17 I realized that isolation can have its drawbacks.

NICOLE: I haven’t, in part because the building isn’t yet full. I am one of the first tenants. The whole thing is very new and exciting.

COURTNEY: That’s really neat! My current apartment was freshly renovated when we moved in, and it was SO nice to not be dealing with decades of layered paint and other people’s residual grime.

NICOLE: FOR SURE. Also, maybe I could set the apartment culture! Start saying hello in the elevator, etc.!

COURTNEY: Haha, you should! We Are a Friendly Building, itislaw.gif

NICOLE: I love the idea of establishing that we’re all friends here. Or at least the kind of friends who will help a neighbor out when needed.

COURTNEY: To be fair, my neighbors are pretty friendly—it was just the prospect of knocking on random doors that terrified me. But fortunately I bumped into a familiar face in the hall before I had to resort to accosting people in their homes. Are you visiting your family for the holidays, now that you’re closer?

NICOLE: Yes, but we’re still celebrating Christmas in DC because my nephew is a year and a half old so it’ll be easier for my sister & BIL. So I haven’t saved any money on holiday travel, if that’s what you’re asking. 😉

COURTNEY: Ah yes, same in my family—kid-proximity dictates all.

NICOLE: NEXT YEAR, though. Maybe.

COURTNEY: Still, I bet your parents are THRILLED to have you closer. I moved away from the Midwest nearly 5 years ago and my folks are still vaguely salty about it, haha. (Maybe salty isn’t the right word, but they frequently remind me how great it’d be if I moved back.)

NICOLE: No, my folks are SUPER THRILLED. My mom and I are going to see the local theater’s production of Annie tonight!

COURTNEY: Oh my gosh, that sounds like so much fun! I saw a dinner-theater production of that a while back and it reminded me what a good show it is.

NICOLE: May we NOT get a new (tax) deal for Christmas! Okay, that was a deep cut badly executed.

COURTNEY: Heh, I was right there with you. FDR ftw! Also may Santa restore net neutrality!

NICOLE: FDR most of the W! I’m sure he was as problematic as anyone else.

COURTNEY: Oh, most definitely. All history books should just be littered with asterisks anymore.

NICOLE: Anything else you’d like to share with The Billfold before we all go celebrate our weekends?

COURTNEY: Well, I have a new column that I should be filing with my beloved editor by Monday! And I hope everyone gets some time off for the holidays (with deep and abiding sympathy for anyone whose job doesn’t allow for it–I still remember how hectic it was working retail this time of year)

NICOLE: I am excited to read your new column!

COURTNEY: I am excited to finish writing it, haha.

NICOLE: And I agree: I have had years where I didn’t really get a break over Christmas (I got THE DAY off, plus the weekend, which is still more than some people get) and it is exhausting. May we all get the time we need to rest this holiday season.

NICOLE: There are still two weeks to go!

COURTNEY: True, I keep forgetting that time doesn’t actually cease to exist the instant my airplane takes off next week! Also I have a lot of work to get through between now and then (as I’m sure you do too). But it was great catching up with you!

NICOLE: You as well! Back to work (and then to the weekend) for both of us!

Go read the Businesslady archive if you haven’t already! Or buy Courtney’s book!

1. We Did Good, Billfold
2. Question Wednesday
3. What I Learned From Five Years of Writing and Editing for The Billfold
4. How a Program Assistant Dealing With a New Paycheck System Does Money
5. Classic Billfold: What I Wanted From My Move to Portland and What I Got
chatsdear-businessladyfriday-chats