How I Got This Job: Federal Librarian 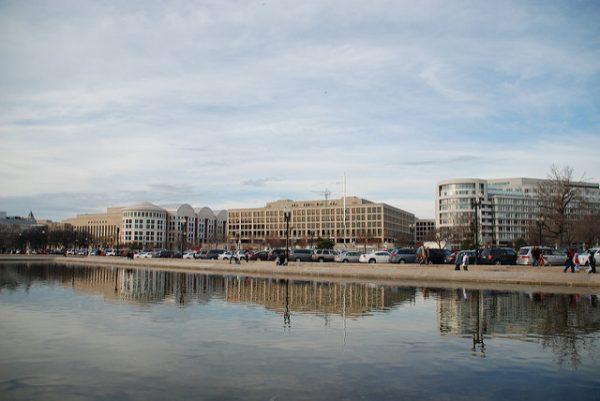 I grew up in the DC area, and always knew I wanted to return when it was time to find a job. I was finishing graduate school for library science, so I did the thing any good introvert is best at—I applied for jobs online. The main clearinghouse for federal employment is through USAJobs.gov, and they allow those who register to get notifications for new postings through email or RSS feed.

The federal job application system is notoriously complicated to navigate, but since I was looking for something as an entry-level librarian, there were fewer options, and I did my best while answering the deadly “KSAs” (Knowledge, Skills and Abilities) about my newly acquired education and work experience as a librarian. I applied for a number of jobs, only to receive paper envelopes in the mail weeks later (because these were the days when this type of information was still sent via snail mail) gently letting me down because I “didn’t meet the requirements.”

I wish I could say that I just kept filling out forms until I got a job, but I didn’t. In a move that I’ll call “networking-for-introverts,” I asked my dad (a government contractor) if he would be willing to talk with a coworker of his who worked with librarians, ask her to find out who was hiring, and pass along the copy of my resume I’d given him.  I got an email a few weeks later saying, “You should apply directly through the website of Agency A, because they’re hiring.” And, despite filling out the entry-level form and getting a canned response saying, “You do not fit the requirements for any jobs we have open,” I later received a phone call and an interview, and eventually a job based on my skills and enthusiasm.

The lesson here is that while being qualified helps, getting someone to actually look at your resume and pay attention—either through networking or more assertive job-seeing actions—will do more for you than form-filling alone.

A full decade later and I’m still in the greater DC area, celebrating my 10-year anniversary as a federal employee. I switched to another agency a couple years back, which was a lot easier than trying to get that first job in the federal government. I was more familiar with what the requirements of the job would be, and how the federal government actually works. I was able to put buzzy keywords in my resume that made me stand out, both on paper and to the algorithms doing the initial pass at applications. Plus, interviewing for a job is always less stressful when you are still employed, since there’s no pressure to find a way to pay the rent.

When you’re applying for jobs with the federal government, it’s useful to have an idea of what the whole “Pay Scale/GS” system means. Each job is graded based on the responsibilities and the educational or experience requirements—the lowest level jobs are GS-1, and entry-level jobs that require a college degree are GS-7. (Entry-level jobs that require a masters degree are GS-9, and the ones that require a doctoral degree are GS-11.)  Within each grade there are steps, which are your yearly/semi-yearly pay raises that you can earn through good performance, and you can jump to a new and higher-paying grade if you take on a job that requires more responsibilities. You can’t go above GS-13 without being a manager of some kind, and if you go above GS-15 you’re in a serious boss position indeed—usually the kind that gets your portrait on the wall along with the presidents and the agency director. So you’ll know when you’re a GS-9 that applying for a GS-13 job is going to come with less likelihood of getting the job since it’s four levels above, but applying for a GS-10 or -11 might be a more reasonable jump, especially if you show a lot of promise at your current job. Not all agencies use the GS scale, but most of the time they’ll tell you what the equivalent level is, since that’s the pay guide to which all Feds will turn to most quickly.

Being a federal employee has it’s pros and cons. I love my job—my new agency is a science-focused group where I get to take advantage of the fact that I have an undergraduate degree in biology, plus I get to be excited about scientific achievement and innovation as part of my job on a regular basis. I have had great coworkers throughout my entire career—hardworking people who are also kind and interesting. As a librarian, I’m lucky enough to be in a generally low-pressure, 9-5 type of job that doesn’t involve getting frantic emails or calls at home about work projects. It doesn’t hurt that working as a Fed, I have the ability to make much more than I would at a university or public library. The benefits beyond that are pretty sweet too—I regularly look at my retirement account (TSP) and am quite proud. Beyond that, if I can manage to stay in federal service for another decade (or more), I could stand to make more money through the small pension plan that is still available to us, though retirement money is one of the issues that Congress loves to bring up as a potential chopping-block item.

Which brings me to the cons. Those of us who actually make the federal government run hate that we are often painted as “the swamp,” and we don’t like the negative attitudes that other people have towards federal employees. The Federal Employee Retirement System (FERS) is constantly being used as a pawn in budget negotiations, and pay raises—which help counteract inflation and increasing cost of living—have been stagnant for the past few years. This means that it’s more difficult to afford living in an area that has maintained a stable (and expensive!) housing market since long before the Great Recession.

When it comes to career mobility and growth in my field, despite living in the same city as the Library of Congress, it’s important to remember that that particular institution is not the be-all and end-all for every working librarian. But the federal library job market is small, so there’s little room for career growth into new and more challenging work unless someone retires out of a position. Even then, chances are that the powers that be will “re-grade” the recently vacated position into a lower level so that they don’t have to pay a new employee as much money, while still keeping the majority of the workload.

You’d also better think twice about advancing your career through continuing education and professional development. Ever since the GSA travel scandal, the rest of us have been severely limited in the kind of travel and training that we’re allowed to do. This means that I haven’t been to a professional conference or training in more than five years, something that stings when you have few other opportunities to improve yourself professionally.

My recent pet peeve with my Federal employers has been the lack of any kind of paid parental leave, and the yearly rumors that seem to surround the subject. I’m not optimistic that anything will be accomplished on that front before I have my first child next year. Instead, I’ll be forced to use all of my sick leave and vacation in order to have any kind of income during my federally-allowed time off.

Looking at that pros-and-cons list, one might think that I’m warning Billfold readers away from applying to federal positions. I’m not; for some of us, it still financially makes sense, in spite of it all. My fairly modest lifestyle would become untenable if I decided to find a job with better opportunities for growth and development—I’d probably have to work longer hours and spend less time with my family, for example. It’s a tough choice that I have to reaffirm every year.

But I look at the spreadsheet of my accounts at the end of each month and I’m proud of what I’ve been able to accomplish personally and financially while doing a job that allows me to serve both my country and the missions that my agencies work towards. If I had to go back and make the choice again, I would still become a federal employee.

Maggie Keller is a federal librarian who lives in Virginia.   You can follow her many ramblings on Twitter @darastar.

1. We Did Good, Billfold
2. Question Wednesday
3. What I Learned From Five Years of Writing and Editing for The Billfold
4. How a Program Assistant Dealing With a New Paycheck System Does Money
5. Classic Billfold: What I Wanted From My Move to Portland and What I Got
careersfederal governmenthow I got this joblibrarians