My Last $100: Revisiting My Youth in San Francisco 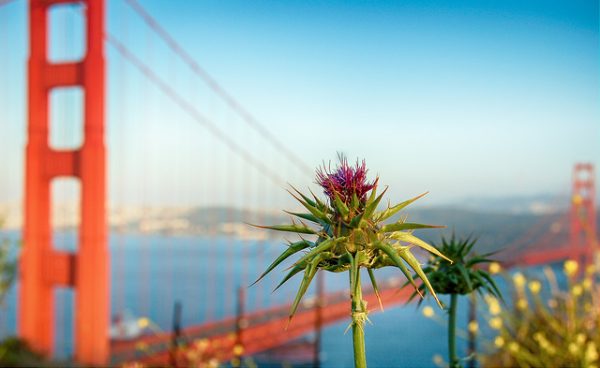 I’ll tell you one thing about going on vacation in the San Francisco Bay Area: one hundred dollars goes fast, even when you’re sleeping in your old college roommate’s spare bedroom.

On some vacations, you see the new and different. On this one, I revisited the old and loved. I was a college student at Berkeley several decades ago, and then I lived in San Francisco and worked in book publishing.

At the time, I paid $266 per month for rent. In the Mission District. (And yes, I still thought it was expensive!)

How things do change. While it’s not possible to track down exactly how much the rental goes for now, Zillow helpfully estimates the refinancing monthly charges at that address at a cool $4,650. At the time I was renting just one floor of the house, but still. It’s both astounding and chilling to realize what a few decades can do.

Yes, I know this piece is about vacation costs and not real estate. But they kind of ran together on this trip, which was partly about comparing and contrasting the costs of my youth with the costs of today.

For example: my college roommate and her husband bought a modest house in Berkeley when they got married after college. Originally built in the decade after the San Francisco earthquake of 1906, it’s now much more desirable than it was when my friends bought it.

That’s the home in which I stayed during my trip. They had recently renovated it, so real estate was a large topic of our conversation. We talked about whether the U.S. has become more like, say, France: if you have nice real estate in Paris (they say), the generations hold on to it, come hell or high water.

This led us to discuss the increasing difficulty of American social and economic mobility. We were young, first-generation college students, and back then everything seemed doable to us. Whether it was true or not, it seemed that way because the U.S. had a lot of social mobility, at least partly fed by economic mobility.

But now, the very space where we felt the world was open to us is no longer quite as open. My friends’ daughter, who’s pursuing a master’s in psychology, will simply never be able to afford to live in the Bay Area given her intended profession, real estate prices, and average psych salaries.

Does this mean that, as young people move to different places, the current hot spots will eventually become ossified? Does the Bay Area run the risk of facing an economic fall like Detroit, once computers become an old industry instead of a new one?

And just how far does $100 get you in San Francisco these days?

A few years ago, I wrote a rebuttal of the idea that San Francisco’s famous vegetarian restaurant Greens was the start of the vegetarian renaissance in this country. (The Moosewood Cookbook came first, along with several other funky vegetarian establishments.)

However, I always felt like I gave Greens short shrift because I’d never actually been there. So it was one of the first stops on my vacation itinerary.

And yes, Greens is great! It has a kind of Zen trattoria feel, with large windows and plain wood tables. Now, although certain things on the menu are innovative (barbecued vegetable blossoms, for one), not all the food is innovative. In fact, I could have eaten what I had—a spinach and feta cheese omelette—almost anywhere in New Jersey for far less. But it was really good and really fresh.

Plus, the total bill included corn bread, a pomegranate martini, and part of a chocolate truffle cake, all favorite standbys if I can get ‘em.

Given its fame, Greens is surprisingly affordable. It also comes with an expansive view of the Golden Gate Bridge, which was nicely wreathed in fog although the day was sunny. Classic tourist scenery, and far cheaper than Berkeley’s Chez Panisse, which was not on the itinerary this time around!

Since my friends paid for the gas, I paid for the parking—and I was primed for parking at Greens to top New York City prices. Would it be $30 for a couple hours?

No! Cheap as dirt. What ho, San Francisco real estate?

Admission to the Oakland Museum of California Art: $15.95

Next stop was across the Bay, to the Oakland Museum of California Art, for the last days of an exhibit of Dorothea Lange’s photography.

The exhibit was wonderful; a retrospective of one of my favorites. Lange, of course, is best known for photographs like 1936’s Migrant Mother—but she built her career through photographs as diverse as San Francisco society portraits at the turn of the century and strikes on the docks throughout the 1920s and 1930s.

In fact, seeing her photographs of striking dockworkers reminded me of just how much this city has changed. After the museum, we drove past the piers of San Francisco Bay. Now, although they’re physically the real thing, they serve almost as images of past piers. They’re no longer working docks, but shells for upscale restaurants and stores.

I’ve always loved the idea that San Francisco is the original home of the American coffee revolution. San Francisco’s one-time Italian and Beatnik haven North Beach and Berkeley’s Peet’s Coffee were arguably the first places to bring the European coffeehouse to the U.S. (Yes, I know New York can make similar claims, but still.)

So I am very fond of Peet’s coffee as one of the bridges that took America from Sanka and Folger’s to excellent coffee and, I guess, the talk-and-books culture a good coffeehouse can foster.

Imagine my surprise when I found out that the original Peet’s now has a museum! We had to go. It’s a small museum, and part of the larger still-functioning coffee bar, but still interesting.

Peet was a Dutch émigré who moved to the Bay Area after World War II. The museum included information on Dutch trading and coffee production, as well as Peet’s life and his fascination with Zen Buddhism.

The museum also included a heartfelt testimonial letter from Lance Ito, the judge at the O.J. trial, who found Peet’s when he was a student at Berkeley’s law school. He had apparently spread the word—and the mugs—to his entire staff.

Well, as you’ve probably guessed, I pretty much like going to museums, talking, and eating when on vacation! If you’re keeping track, we’re now at $90.90.

San Francisco’s Museum of Modern Art (MOMA) topped the $100 thermometer. They too had a special exhibition; this time on Edvard Munch, of The Scream fame.

Is this surcharge stuff a West Coast thing? I haven’t been charged in New York for a museum visit in several years.

1. We Did Good, Billfold
2. Question Wednesday
3. What I Learned From Five Years of Writing and Editing for The Billfold
4. How a Program Assistant Dealing With a New Paycheck System Does Money
5. Classic Billfold: What I Wanted From My Move to Portland and What I Got
bay areamy last 100 buckssan-francisco