I Couldn’t Make It as an Uber Driver, According to This Game 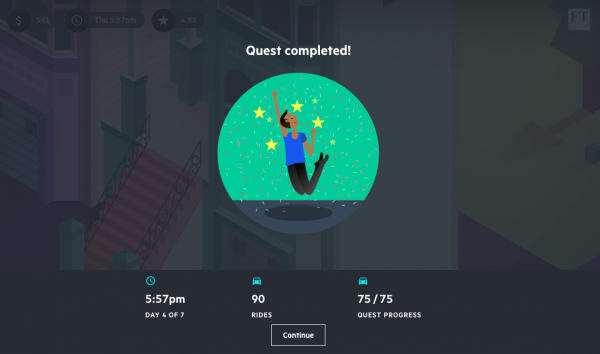 Yesterday, when we were all playing Payback (the game that shows how easy it is to rack up student loan debt), Billfolder icwhatyoudidthere mentioned that we should also try The Uber Game, which is designed to show how difficult it is to be an Uber driver.

As with Payback, The Uber Game takes a little under ten minutes to play, and there aren’t any weird “click the screen as fast as you can” challenges (or at least there weren’t in my playthroughs). You spend a fictional week as an Uber driver, picking up rides and deciding whether you’re going to fix a chip in your windshield, get a business license, let people eat burgers in your car, etc.

The Uber Game, which was created for the Financial Times, is a bit obvious about what the “right” choices are. I knew that if I elected not to fix the chip in my windshield RIGHT AWAY, it would lead to something worse happening within the week—even though that isn’t always the case in real life. (It is possible to get your windshield fixed tomorrow. Or later that evening.)

Likewise, the game appears to reward chatty drivers, which… um… not all of us love 30 minutes of small talk on the way to the airport.

Also, you’re kind of set up to fail. 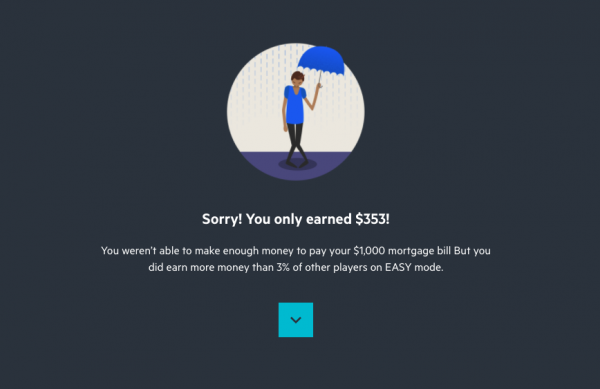 Why is it saying I didn’t earn enough to pay my mortgage if I earned $353 (after expenses) in one week? Multiply that by four weeks and I’ve got $1,412, which is more than enough!

I replayed the game to see if I missed anything (and to see if I could get a better score). The opening screen indicates that my $1,000 mortgage payment is due at the end of the week, which… okay, but that’s definitely rigging the game against us. Why aren’t we Ubering for the entire month to make this payment?

The second time through, I made all of the obviously good choices and earned $813, which still meant I lost.

Anyone else want to play through this game and see if there’s a winnable scenario?

1. We Did Good, Billfold
2. Question Wednesday
3. What I Learned From Five Years of Writing and Editing for The Billfold
4. How a Program Assistant Dealing With a New Paycheck System Does Money
5. Classic Billfold: What I Wanted From My Move to Portland and What I Got
gamesgig-economysharing-economyuber