I Played Through Payback, the New Game About College Debt 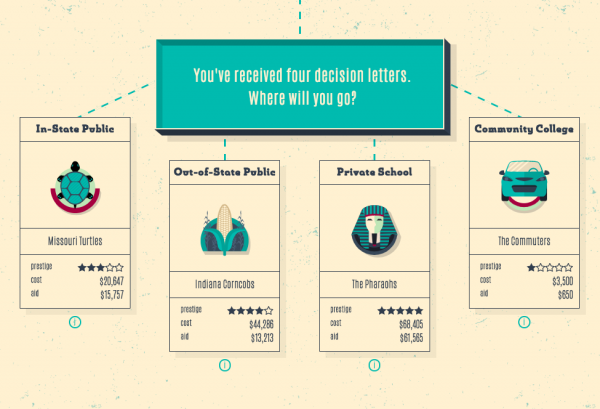 This game is called Payback.

Payback takes less than ten minutes to play, so I gave it a test. I tried to make the same choices I made when I was an undergrad: I went to an out-of-state public school; I stayed in the dorms all four years; I skipped sororities, studying abroad, and spring break trips; I worked through summer breaks. 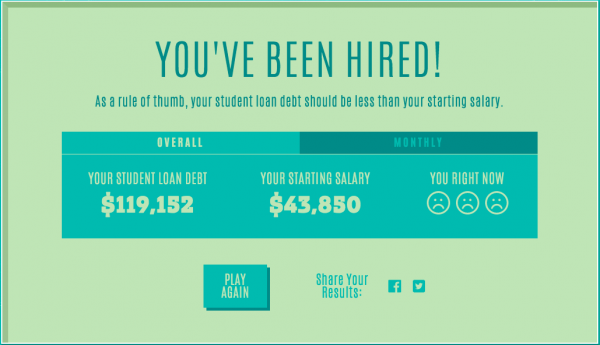 But I was most disappointed in the fact that Payback claimed my choices would make me unhappy. Every time I elected to work over the summer or to spend spring break in the library, Payback decreased my happiness meter. But I actually enjoyed my summer jobs, for the most part, and I loved the library. I remember feeling badly that I couldn’t afford to go to the big concert, just like Payback said I would, but it was like… a 24-hour unhappiness. Not the kind of thing that would give me three frowny faces after graduation.

I do appreciate that Payback tries to get users to consider personal fulfillment as one of the costs of college, and that there’s also a meter for making friends/networking. (Mine went up when I got summer jobs and went down when I skipped spring break.) I was amused that Payback dinged me severely for not taking an unpaid internship—I missed out on both skills and connections—and still rewarded me with a $43K job at the end.

Anyone else want to give Payback a playthrough and share your results?

1. We Did Good, Billfold
2. Question Wednesday
3. What I Learned From Five Years of Writing and Editing for The Billfold
4. How a Program Assistant Dealing With a New Paycheck System Does Money
5. Classic Billfold: What I Wanted From My Move to Portland and What I Got
collegedebtgamesI did graduate with three frowny faces but that was because I was on the graduation planning committee and worked myself so hard I ended up in the emergency room during graduationstudent-loan-debt