The Billfold
One Weird Trick 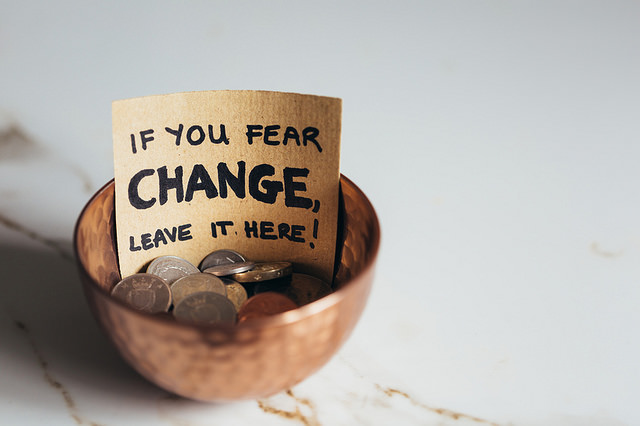 At the beginning of June, I optimistically quit my writing job with several freelance gigs lined up to get me through the month. By the beginning of July, those gigs had ended, and I realized I was woefully underprepared for the months ahead. To get me through a dry work month while I hustled to prep for financial stability in August, I turned to the oldest saving tricks in the book: stop drinking lattes, start packing your lunch, and lo and behold, here I am sitting once again atop a towering pile of cash.

Okay, so that’s not how it went. I didn’t switch to a latte-free lifestyle. Instead, I fumbled my way through a series of financial mishaps. In doing so, I learned how to save through unlikely methods that ended up not just helping me at the time, but also teaching me a lot about how I inherently handle money. The bad financial habits that had been hiding in plain sight when I had a steady income exposed themselves in the light of my less-than-lucrative month.

How did I expose those habits? By using some weird tricks to avoid parting with my money.

1. Lose your debit card… and don’t replace it.

Losing the debit card for your only bank account and not having a credit card to back you up really tightens the ol’ belt! When I went to the bank last month to get a cashier’s check to pay the security deposit on a new apartment, I accidentally left my debit card with the teller. It must have been all the excitement and mortal fear of imminently signing a lease with my significant other. Once I was home and realized what had happened, I decided not to look for my missing card.

Instead, I canceled the card immediately… and didn’t bother to get a temporary replacement while I waited for my new card to arrive in the mail. This would take “four to six business days,” aka maybe two weeks to a month, depending on whether or not the bank listened the last time I told them I no longer reside with my parents. (I am a grown adult who lives in an entirely different state with my own unique address!)

Not having a debit card for an undefined number of days made me think a lot more carefully about how and when I was spending money. I couldn’t do it frivolously. I had to plan in advance if I wanted to embark on a money-spending endeavor, because it required asking my friends to spot me the cash (since I had no way of getting cash of my own). And yes, I felt a little guilty about hitting up my friends for dough.

Feeling guilty about spending other people’s money is a great way to spend less of it. Even though I could instantaneously pay my friends back through Venmo (which is connected directly to my bank account, not the debit card I misplaced), there was always that moment before I pressed “confirm payment” in which my friends might start to doubt my intentions.

Plus, when you can only spend with friends around, you’re less likely to make embarrassing or expensive purchases you’d usually only make when left to your own devices. For example: one afternoon prior to the debit card loss, I went on a on a solitary expedition to an Asian fusion lunch spot that I never suggest when I’m with my friends because it’s too expensive. After lunch, I somehow found myself in a kitschy home goods store, where I purchased a pack of erasers shaped like animals and a bunch of Tupperware I didn’t need. (Also, mysteriously, shaped like animals.)

3. Empty your [insert animal name] bank and arrange the coins by denomination.

Items shaped like animals make for a perfect segue into my next pro tip. Dump all the coins out of your ceramic bank (mine’s shaped like an owl) and put them in piles based on their denomination. Then take all of the pennies, which are technically worthless, and superglue them into a surreal sculpture. Sell that sculpture, and you’re likely to have made a profit!

With your remaining coins, you’ll actually end up learning how far change can get you—the change you usually let fall to the bottom of your bag. This tip is not only good for your wallet, but also for your arteries. For instance, in the grocery store, most processed foods come in packs and cost upwards of a couple dollars. But some fruits and vegetables cost less than a buck each, depending on how much they weigh. You can easily exit the store holding a peach in one hand and a carrot in the other, having only parted with a small handful of change. This is how I ate lunch for most of July.

Bonus tip: find a significant other who has an irrational fear of the way change feels in their hands. I did this about a year and a half ago and let me tell you, the long-term investment has panned out.

4. Use your new vegetables to make the canned food you’ve had stashed away in your apartment more appetizing.

I buy and consume canned food all the time because it’s cheap, tastes good, and is easy to “cook.” But some of those cans end up sitting on the shelf for a while. That vegan gluten-free barley vegetable soup looks a lot more appetizing at the grocery store than it does at home.

However, I found that by adding just a few fresh vegetables to an ugly soup, I could make the concoction look and taste like a home-cooked meal. This impressed both myself and my friends. All told, a meal like this can feed several and costs about five dollars.

5. Think about fancier things you want to eat/buy to the point that you get tired of them before you even take out your wallet.

Fantasizing about how to spend your money is a lot cheaper than actually spending it! A few weeks ago, I passed the day thinking about the aforementioned Asian fusion restaurant, deciding which friend I should invite to join me there for lunch. (I needed someone who could buy the meal that I’d Venmo them for later.) But who liked expensive-but-mediocre Asian fusion as much as I did? And who wasn’t at work midday on a Wednesday who could also afford lunch on the town? All that thinking proved so exhausting I didn’t end up leaving my apartment at all that day. Which was perfect because I couldn’t afford to dine out anyway.

Instead of buying the things you think about, try funneling your fantasizing energy into a creative endeavor, like painting or making that superglue penny sculpture. Not having extra money to use last month forced me to spend more time at home on my hobbies and less time at, say, the bar. Or at stores that sell animal-shaped erasers.

If you’re an especially anxiety-ridden person, you don’t even need a creative endeavor to turn overthinking into not spending money. You can simply pace back and forth all day long fretting about all the things you can’t or won’t spend money on, and voila, you haven’t spent a cent!

My month of mishaps and meticulous spending taught me that I could get by on a lot less than I had been previously purchasing. I’d never bought just one peach before, or canceled a lunch date before I’d even finished planning it. Aside from losing my debit card—which no financial adviser would recommend—most of my money-saving actually followed classic financial advice: don’t buy stuff you don’t need, and find fun ways to use the stuff you already have.

That’s one weird trick I’ll be sticking with for the long run.

Jessica Klein is a freelance writer and amateur portrait artist based in New York. You can find her (writing) work here.

1. We Did Good, Billfold
2. Question Wednesday
3. What I Learned From Five Years of Writing and Editing for The Billfold
4. How a Program Assistant Dealing With a New Paycheck System Does Money
5. Classic Billfold: What I Wanted From My Move to Portland and What I Got
saving-money