Moving to Brooklyn for Love 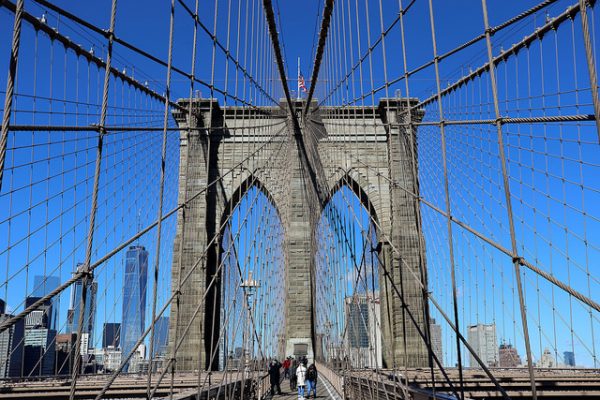 The first few years I lived in New York, my friends and I had a joke that I hated going to Brooklyn.

The truth of the matter was that I didn’t really know Brooklyn. I had barely been there. I worked two jobs, seven days a week in the city and was lucky enough to have found affordable living situations in Manhattan for the first seven years of living in New York. My days were almost always spent between 96th and 14th Street, and most of them were spent at work.

The few experiences I had in Brooklyn were attending shows for work-related events and/or going to friends’ late-night events. This also meant my experiences in Brooklyn were limited to the walk from the train to the venue. I didn’t really know a lot about what Brooklyn had to offer besides the occasional house party or concert hall.

Besides, I had a nice deal, especially in my studio on the Upper West Side. I was only a block away from Riverside Park, on a quiet little street. It was a short walk to a bunch of fancy restaurants and stores. It was a fifth-floor walkup, but it was in a safe, clean building, and nestled at the top of those stairs was my cozy studio space. It had a separate kitchen, large bathroom, and ample closet space. Plus, it was only a 25-minute train ride to any of my places of work.

Everything I needed was in Manhattan, and I had limited time for anything else.

Then I started dating a guy who lived in Brooklyn.

He lived in his family house, where he was born and raised. I remember the first time I asked him for his address; it felt so odd not needing an apartment number.

Since I was still living on the Upper West Side, the travel time between my studio and Josh’s house took about an hour and a half. Luckily, we both worked at a bookstore that was about halfway between our places, so a lot of how we scheduled our time together hinged around our work schedules.

Once we had been dating for a while, our routine basically became this: we would try to meet up at some point during the work week for a night and would stay at one another’s place until work the next morning. Then we would usually meet up on Friday and stay at one of our places through the weekend. We would both have a shift at the bookstore on Saturday, so we’d make a late morning breakfast or grab food on our way. Then we’d leave together after our shifts, maybe grab a drink with coworkers, and spend Sunday together until we parted ways on Monday morning.

Our routine helped to bridge the distance between us, but sometimes unplanned changes would result in unexpected expenses. After a last-minute decision to go back to his place instead of mine, I bought about $15 worth of makeup and toiletries at the CVS around the corner so that I could make it through the weekend. I left them at his place, along with a few changes of clothes, to help anticipate other unexpected stays. I also took a few shamefully expensive $50 Uber rides from my place to his in some urgent situations, hoping to save a little time and sanity from the trip.

I loved seeing Brooklyn through Josh’s life there. One of the first times I went to his house to meet his mom for the first time, we went to pick up pizzas from L&B’s, Josh’s favorite. I got the most delicious cup of Spumoni from the ice cream window out front and felt so content in the backseat of his mom’s car on the ride back to the house, a couple of warm square pies on the seat next to me.

It was with Josh that I finally went to Coney Island, eating my first Nathan’s Hot Dog and standing up and screaming on the Cyclone. His friends also lived in Brooklyn and we would have game nights playing too many hands of Cards against Humanity or Taboo. I was beginning to get an idea of the different neighborhoods in Brooklyn. Car rides and errands often turned into stories about life events that had taken place in corner stores or street corners. Knowing these places was getting to know someone I loved.

After about a year of dating, Josh’s family was in the process of selling his house, and I was about to get a significant rent increase (I had negotiated a very affordable two-year lease that was expiring). Josh and I decided we would try to find a place together, and though I tried to consider Queens and other neighborhoods as possibilities, once we started looking, we mostly looked at apartments in Brooklyn.

After looking at a long string of places all over the borough (over 20 in total), we ended up in a nice building around Midwood. My share of the rent was only $25 less a month than what I had been paying for my studio, and we got over twice the amount of square footage, a real bedroom that was separate from the living area, and an elevator, which we both appreciated immensely. It was also a smart move, rent-wise: I happened to see the listing for my old apartment on Street Easy not too long after vacating it, and the landlords were charging over $200 a month more for rent than I had been paying.

Living in Brooklyn hasn’t been totally smooth sailing. With the unpredictability of the trains lately, it can often take me over an hour to get to work. Also, while we have bodegas near us and a few decent places to grab a bite, we don’t have any places where we really like to hang out. Usually if we want to go out and spend a whole day wandering around, we go into Manhattan. A part of me really misses having that right at my doorstep.

We also live far enough out that it’s harder for us to go to other neighborhoods that aren’t directly off our train stop. I’m finding myself spending more money than I expected on rideshares to get to and from other parts of the borough.

That being said, one of my favorite things about living on the Upper West Side was that I would get home and feel like I could breathe once I crossed the threshold into my apartment. I was always so happy to return to a space that was all mine.

With our Brooklyn apartment, I feel a similar sense of peace when I open the door. Sure, this space isn’t all mine—there’s usually a guy laying on the couch. But that only adds to the feeling of being home.

Kimberly Lew is a writer who’s glad to say she lives in Brooklyn. Some of her long-time friends can hardly believe it. www.kimberlylew.com

1. We Did Good, Billfold
2. Question Wednesday
3. What I Learned From Five Years of Writing and Editing for The Billfold
4. How a Program Assistant Dealing With a New Paycheck System Does Money
5. Classic Billfold: What I Wanted From My Move to Portland and What I Got
brooklynmoney and relationships