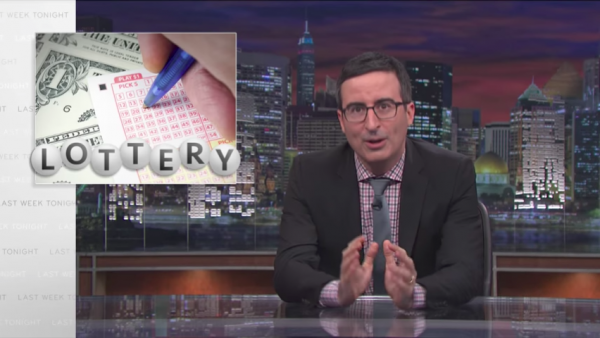 The only thing scarier than Shirley Jackson’s eerie, middle-school-must-read masterpiece “The Lottery” is the actual lottery, as John Oliver made clear in his last show of the season.

State lotteries cost a lot to implement, make addicts of citizens — usually the poorest ones, who can least afford the loss of an average of $2500 (!!) a year — and do it all under the auspices of being Good for Education. Yet education spending has either stayed flat or gone down in the vast majority of the states that implemented the idea of legal gambling to pay for schools. In North Carolina, for example, setting up an official Education Lottery gave politicians an excuse to stop channeling corporate taxes towards school construction. Now, of course, they’re cutting corporate taxes. Why ask deep-pocketed businesses to fund students when states can simply trick poor people into doing it? It’s like Tom Sawyer’s fence-painting trick on a massive scale.

People hate taxes yet love lotteries, even though lottery winners are often quite unlucky in the long run. Oh, we are a mystifying breed.

Video after the jump.

1. We Did Good, Billfold
2. Question Wednesday
3. What I Learned From Five Years of Writing and Editing for The Billfold
4. How a Program Assistant Dealing With a New Paycheck System Does Money
5. Classic Billfold: What I Wanted From My Move to Portland and What I Got
education-costsgames-people-playjohn-oliver