What ‘DuckTales’ Taught Me About Inflation 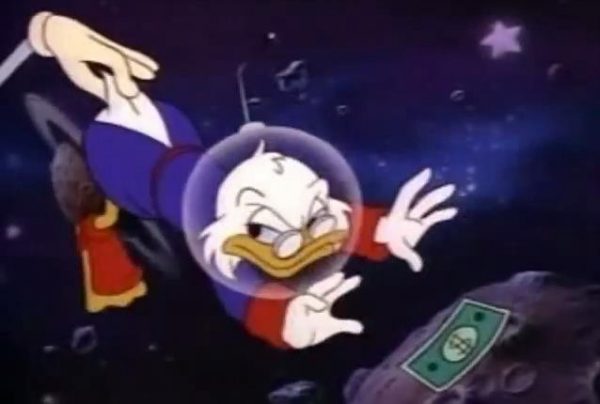 The other night I was having a conversation with a friend about money, and we started talking about inflation. When my friend asked me where I’d learned about the concept, I think he expected me to say, “college.”

Instead I said, DuckTales, and explained how one specific episode of the ’80s cartoon had forever etched the concept of inflation into my memory. It was a humorous anecdote, and I felt clever telling it. But was it true? After some introspection, I realize that what I said was only partly true, and the reason why says a lot about the state of financial education in America.

If you were to ask every person you met where they learned about Christopher Columbus, 99 percent of them would answer, “school.” But if you were to ask them where they learned their money management skills, I promise that you’d get hundreds of unique answers, and those answers would be laced with personal anecdotes, family history and hard-knock stories. Almost no one would relay their classroom experiences, and that’s because personal finance is largely not in the public education curriculum. Some people learn money management skills at home, but around many dinner tables earlier attitudes of money as a taboo subject prevail (This site is doing God’s work trying to reverse these attitudes).

This lack of education and transparency makes for interesting stories, but it’s bad policy. Imagine a world where it’s rude to talk about driving, where there are no driving schools, no licenses, and teenagers learn to drive by being placed alone into a car that is idling forward. Does this seem safe for anyone involved? Now picture a 22-year-old college graduate with student loan debt and no financial IQ unceremoniously dumped into the real world.

Without a formal education, we tend to pick up bits of financial know-how where we can and fashion it into a crazy-quilt of knowledge. This is what led to the DuckTales story. Every time I hear the word inflation (and I mean every time) I picture one of those baby ducks from DuckTales standing in front of a gumball machine, up to his neck in coins, gathering thousands of dollars to buy a gumball.

I looked up this video recently to see how badly time had mangled my memories, but I’m happy to say that I got most of the details right. (Side note: For some reason I doubted I’d be able to find this video despite the fact that the Internet has NEVER let me down. Every time I have these doubts the Internet treats them like undefended alley-oops). The plot involves a replicator machine invented by Gyro Gearloose that Huey, Dewey and Louie co-opt to create a near infinite supply of money (if you think I didn’t hit up Wikipedia for these names, you’re insane). As warned by Scrooge (who is way more Scottish than I remembered), when this replicated money enters the money supply prices skyrocket, leading to thousand-dollar bus rides, hundred-dollar lollipops, and streets so littered with money that snowplows are deployed to clean up the mess. The only image missing is Launchpad McQuack wallpapering his house with money a la post World War I Weimar Germany.

I wasn’t the only person who remembered this episode; it has been uploaded to YouTube dozens of times. What I didn’t expect was for it to be used as a political weapon against Federal Reserve policies. But according to YouTube, that is exactly what’s happening. For every clip that simply replays the episode, there are one or two clips doctored to include politically charged title cards. One particularly angry video interrupts the episode every thirty seconds or so with cards reading, “Are you listening, Washington?” and “Are you listening, Federal Reserve??”. To these posters, Scrooge McDuck is Ron Paul with a top hat and no pants.

This discovery threw me off course. My intention was to show you a short DuckTales clip and send you on your way whistling the addictive theme song. Instead I began to worry whether people will think I’m the kind of person with gold, oil and water stored in my basement. For all the lessons I learned watching DuckTales as a kid, none of them involved the nefarious nature of the Federal Reserve.

I’m certainly not going to wade into arguments about stimulus, quantitative easing, hyperinflation, or anything of the like, mostly because I’m not qualified. But I wonder how much our lack of financial education leads to incoherent arguments where each side cannot understand the other, let alone agree, and where 1980’s cartoon clips are used in place of facts.

This is why I was only half true when I answered my friend. A DuckTales cartoon did the important work of introducing me to the basic concept of inflation, but that’s all it did. The rest of my knowledge arrived through curiosity and study. As in all things, serious study yielded nuance: inflation can be bad, is sometimes disastrous, but generally positive when modest in nature, and rarely existent during recession. I can’t blame a 20-minute cartoon for omitting these points, but I can blame our education system. It is high time public schools required some mix of personal finance and higher-level economics in their curriculum. Eighteen-year-olds need to understand credit card debt. They need to understand mortgage terms. They need to learn basic investment strategy. They need to understand the ways in which personal finance are and are not similar to national economics. They need the concept and the nuance.

But not all lessons require nuance. DuckTales also taught me that it’s completely safe to dive into a giant vat of money and swim around. The world needs to hear the truth. Are you listening, Federal Reserve??

1. We Did Good, Billfold
2. Question Wednesday
3. What I Learned From Five Years of Writing and Editing for The Billfold
4. How a Program Assistant Dealing With a New Paycheck System Does Money
5. Classic Billfold: What I Wanted From My Move to Portland and What I Got
adjusted-for-inflationducktalesfinancial-literacy