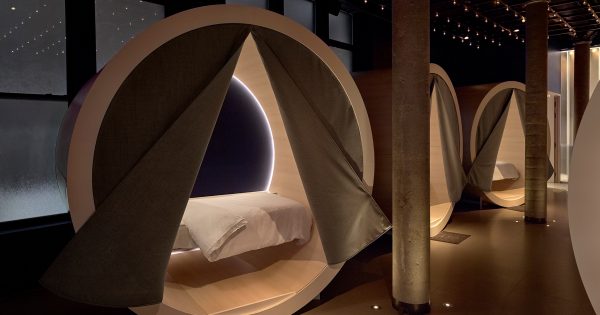 When I saw Nicole’s This Week in Pods post about The Dreamery, a new nap bar in New York City by mattress/bedware company Casper, I knew I had to go.

I used to dream about nap bars. I was working seven days a week between a full-time office job and a part-time retail job. I was working such a rigorous schedule because I was strapped for cash, but I often thought about how many hours of pay I’d be willing to sacrifice for the chance to catch a few quick Z’s on a 13-hour workday.

So, when the opportunity came up, I bought a Groupon for YeloSpa, a Manhattan spa that also boasts a nap service. I opted for a massage and a short nap for $115. There wasn’t exactly a pod involved — instead, I rested in a special chair in a private room. Sadly, I don’t remember much about the experience other than that I was quite anxious the whole time — I was running late and arrived almost half an hour after my appointment started in a panic. Overall, it was an expensive endeavor with very little relaxation. I didn’t buy another nap for eight years.

Unlike YeloSpa, which charges $1 per minute for naps, The Dreamery offers a flat fee of $25 for a 45 minute session. Appointments can easily be made on The Dreamery’s website, and you can also make appointments through ClassPass and Mindbody. I booked my nap for 1:30 on a Friday, and a big chunk of Friday afternoon appointments already had a wait list. I wondered how many of my fellow midday nappers were using their lunch breaks for a snooze — or if they, like me, were utilizing their summer Friday to unwind without the pressure of having to go back to the office afterward.

Entering The Dreamery was like stepping into a very trendy startup. Lights, imitating stars, lined a dark blue ceiling leading to a clean, hip reception/lounge area. A very friendly staff member confirmed my appointment before asking if I would like to wear a pair of pajamas for my nap. While I, truthfully, have a bad habit of sleeping in my street clothes, I decided to go with the very cute constellation-printed pajama set to fully give in to the experience. I was given a small bag of Sunday Riley skincare products, as mentioned in the Racked review, and was escorted into the locker/changing section. This area had curtained-off sinks, bathrooms, and a selection of toothbrushes, ear plugs, eye masks, combs, and toothpaste free for the taking.

When I was fully pajama-ed, I sat in a small transition space, walled off from the lounge by frosted glass bricks. Eventually, another employee showed up and quietly led me to my sleep pod, one of nine, in a large, dimly lit room.

The pod itself was sort of like a giant hamster wheel with a wall blocking off one side and heavy curtains on the other. It felt spacious, not claustrophobic. The bed was very comfortable, and the bedding felt especially pillowy. On the left side of the bed was a switch that I could use to adjust the light in the pod, but it was otherwise kept dark until my 45 minutes were up, at which time the lights provided a futuristic interpretation of a sunrise.

Unfortunately, some ambient noise came in through the curtains. I could hear the occasional bumps and footsteps of people in or around the other pods. It didn’t particularly bother me, but it’s something I can imagine could possibly impact someone’s experience, depending on how busy the place is.

The biggest question I had going into the experience was whether or not I would sleep, but as soon as I got under the covers, I wasn’t terribly worried. In the darkness, I was able to relax a bit — and while I didn’t fall into a deep slumber, I found myself passing in and out of sleep, often starting a thought and having it evolve into something so beyond my immediate consciousness that I’d suddenly become self-aware and realize I must have been dreaming. If I could describe how it felt, I would liken it to the episode of The Simpsons where Lisa is in a sensory deprivation tank. While I didn’t necessarily have any big revelations about my relationship with my bumbling father during my time in the pod, I did take a wonderful trip to dreamland.

I ended up waking up five minutes before my pod time was over, so I lay quietly until the lights slowly turned on. I took my time emerging from my pod, and no one showed up to rush me out. I changed back into my clothes and was thankful for the plastic combs available to tame my bedhead. When I emerged in the lobby, the very friendly guy at reception told me to help myself to their refrigerators of cold brew and LaCroix, plus RxBars and other snacks, and to hang out as long as I wanted. He even provided the WiFi password.

The Dreamery claims that it’s trying to make sleep and rest a part of our regular wellness routines, but I’m not fully sold on the idea that one needs to do it at a place like The Dreamery. What The Dreamery is selling most is a lifestyle, which is clear from the Instagrammable decor, from the little mantras on the washroom mirrors to the muraled walls. As nice as the amenities are, I can’t necessarily say that having access to name-brand refreshments or toiletries are really necessary for creating an environment of relaxation, and I felt very aware of all these brands on display. What the nap bar sells most successfully are the Casper products, since you are literally surrounded in them as you nod off in your pod.

(Full disclosure: I actually have a Casper mattress, but it wasn’t something I was necessarily seeking. My parents had bought us a mattress from Costco that basically gave us nightmares for months. After about six months of bad sleep, we finally decided to return the mattress, and because we had to coordinate both the delivery and pick-up, we were looking for a replacement that could arrive at our door as soon as possible. A friend recommended Casper, we bought their cheapest model, and we’ve been thankfully getting much better sleep. Prior to this experience, however, I used to hate Casper advertisements. Some of the subway ads feature animals that act like humans, while others include animals that act like animals alongside actual humans — WHAT ARE THE RULES OF THIS WORLD YOU’RE SHOWING US, CASPER?)

But overall, I have to admit that I was rather impressed with The Dreamery’s restraint. Employees were instructive without being overbearing, and they were pretty hands-off throughout the experience. While some of the decor is a little reminiscent of trendy selfie-factories, Casper did a good job of dividing the space into different areas so that I felt myself decompressing and slowly transitioning from my life outside The Dreamery’s doors. Also, the price is quite decent — almost half the price of YeloSpa.

I have always seen the value of nap pods, but I feel like that need is more an indictment of New York real estate than proof of the value of paying to sleep. So many people commute to Manhattan from cheaper, farther-away neighborhoods that paying for a private space in the middle of the day can start to seem reasonable. Thankfully, since I no longer work seven days a week with some 13+ hour days, I can’t justify consciously adding sessions at The Dreamery into my regular routine. I do see how this could be a nice option on a day when someone is really dragging, or even as a nice place to get ready between a really long day at work and an important evening event. I think nap bars like The Dreamery will especially excel if they are located in areas concentrated with office buildings. Adding a commute to the time it takes to nap and decompress renders The Dreamery less practical.

Regardless of what The Dreamery means for the future of sleep, I will say that I had a positive experience. As I watched the lights come up over my pod, I felt refreshed, a feeling that stuck with me even as I walked back out into the humid New York streets. Sleep is free — trust me, I’ve taken many a nap on the train, in the park, or at the movies. But having a space that is yours, even for just 45 minutes, to let your mind roam? Maybe that’s worth a little extra.

Kimberly Lew is a writer and nap expert living in Brooklyn. www.kimberlylew.com

1. We Did Good, Billfold
2. Question Wednesday
3. What I Learned From Five Years of Writing and Editing for The Billfold
4. How a Program Assistant Dealing With a New Paycheck System Does Money
5. Classic Billfold: What I Wanted From My Move to Portland and What I Got
nappodssleepthe dreamery