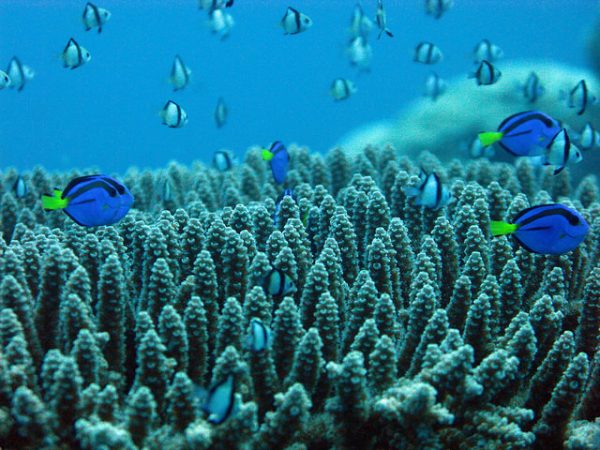 “Go big or go home.” “Throw everything up against the wall and see what sticks.”  “A business that doesn’t grow, dies.” If you run a business, chances are you’ve heard expressions like this in lectures, articles, training sessions, and so on. But lately, I’ve been channeling Dory’s words of wisdom instead: “Just keep swimming, just keep swimming…” It’s easy to be drawn to new projects, bigger opportunities, and shinier prizes, but this year I’ve been focusing on moving my business forward by standing still — or by swimming against the current, which can feel like the same thing.

I’m sure this comes as a shock, but owning and operating an independent bookstore is not a path to wealth and fame. In fact, it’s damn hard work. With challenges like rising inventory costs and ever-increasing screen time, not to mention the Online-Retailer-That-Shall-Not-Be-Named, bookstores are in a constant, though promising, struggle to survive, grow, and adapt. There’s always a new trend we should jump on, a new demographic we should target, a new medium we should explore. But in planning for 2018, I finally had to take a step back and ask myself if the store’s constant efforts to reinvent ourselves in the digital age might actually be counter-productive. I have all these great ideas, but never have the time or the money to dedicate to them. It’s tempting to try a little bit of everything, but then you split your focus and nothing gets done as well as it should.

So this year, we’re not going to do anything new. Instead, we’re going to reinvest our time and effort into things we’re already doing, but not as well as we should be. We’ve technically had a frequent-buyer program for years now, but we never marketed it very well and we didn’t even roll it out to all of our customers. This year we’re polishing it up, making snazzy rewards cards, and promoting the hell out of it. We’re revamping our website, which is very 2012 and in dire need of a makeover. We’re doubling down on the editing arm of the company. (We are a bookstore, after all. Grammar is sexy.)  All the things that have fallen through the cracks in past years as we’ve tried to hop on the latest bandwagon or start up a new income stream are on the agenda for 2018. We’re trying our hardest not to be drawn the the shiny but out-of-reach rewards; we’re just going to be the absolute best at the things we already do.

It’s a little scary, to be honest. This business is my livelihood and my dream. It’s hard to pass up great ideas — or at least put them on hold for a while. But if we can’t give them our absolute best effort, they’re not going to be successful or profitable. I’ve finally had to learn that moving doesn’t always mean moving forward. Sometimes you’ve moving in circles. The same is true of my freelance work. I could pitch more and more pieces, or apply for ever more editing work from different sources. But instead, I’m going to focus on writing and editing more efficiently and improving my relationships in the channels in which I already contribute.

So I guess in reality, we’re not standing still — we’re digging in. We’re working smarter, not harder. We’ll do our best to stay relevant in terms of technology and marketing, but primarily we’re going to just keep doing what we’re doing, only better. Just like Dory, we’re going to keep swimming.

Erin Matthews owns an independent bookstore in Howard County, Maryland. Following your dreams isn’t always that lucrative, so to pay the bills, she is a freelance writer, editor, and social media coordinator. She doesn’t tweet, but you can follow the bookstore on Facebook, Twitter and Instagram @bookswithapast.

1. We Did Good, Billfold
2. Question Wednesday
3. What I Learned From Five Years of Writing and Editing for The Billfold
4. How a Program Assistant Dealing With a New Paycheck System Does Money
5. Classic Billfold: What I Wanted From My Move to Portland and What I Got
booksbookstoresmovingmoving seriessmall businesses