The Billfold
If We Can Make It There

How We Brought Our Rust Belt Lives to the Big City 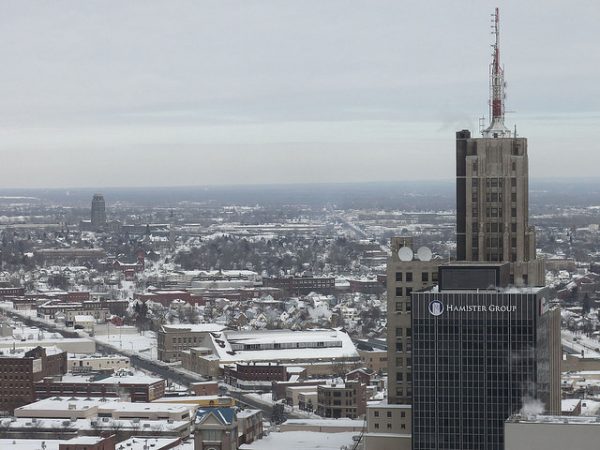 We sat across the rail from our favorite bartender at Buffalo Proper, the same bar we’d had wedding photos taken almost a year before. Sipping cocktails named after Buffalo streets we knew as well as our own bedroom, we laid out the pros and cons of leaving the only city we’d ever lived in together. “Look,” our bartender told us, staring directly into my husband Nick’s nervous face. “Take the job. Move to New York. If you don’t, you’ll be sitting here for the next decade, asking yourselves what would’ve happened if you did.”

It’s the subject of a thousand movies. The symbol of so many American dreams. The Big Apple. If you can make it there, you can make it anywhere. But here we were, trying to figure out if the opposite was true. Could we make our Buffalo lifestyle work in New York? Could we trade in our three-bedroom house for a shoebox-sized apartment? Could I find a job that would pay enough to enjoy the city, or would we just spend every night watching Netflix in a different ZIP code?

Most of all, we needed to find out if we wanted to move. I’d been itching to leave my hometown for years — but Nick, well, he has a Buffalo tattoo on his forearm. To say he felt apprehensive far understates his crushing anxiety about leaving his small pond. But we wouldn’t know until we tried. Maybe, we told each other, that’s kind of the point.

When we decided to take the leap, we had four factors to consider: housing, employment, cars, and living expenses. Nick had secured a well-paying job in the city (that would also pay for the move), but I had to find a new one. I set myself a three-month deadline to find another position that paid at least two-thirds as much as the one I’d left. In the very affordable Rust Belt, we’d managed to squirrel away enough savings to give me time to find a writing gig that didn’t set me back professionally and paid well enough to let us enjoy our new home. Nick’s salary would tide us over, provided we found someone to rent our house and secured an apartment in Queens that cost no more than 20 percent of his annual income.

We also got rid of one of our cars, saving us about $200 each month in car payments and insurance. Since we leased his car  — a Chevy Volt that made a lot more sense with a house to plug it into — we opted to bring it to Queens with us. As a self-proclaimed terrible driver, I kissed my little Camry goodbye with nary a look in the rearview.

The most important — and wallet-wrenching — aspect of moving cities is housing. In Buffalo, we pay about $800 each month on a three-bedroom, one-and-a-half bath house on the West Side. It’s a beautiful, 100-year-old property with all of the charm and occasional headache that comes with a house that old. We were able to rent it out for $1,300 per month, giving us a cushion to pay for any repairs the house might need, as well as offsetting our own housing costs. In Astoria, we found a two-bedroom apartment for $2,500, paying an additional three months’ security to bring our pitbull mix, Jerry. (Yes, we frequently shame Jerry about how much he costs us, usually while he’s tearing up the hardwood with his toenails.)

Much to our relief, our monthly expenses haven’t changed that much since the move. Grocery costs are about the same, and we save almost $100 monthly on gas by taking public transportation near-exclusively. I quickly found a job that lets me work from home, so we save on dog-walking and transportation costs that way, too.

We also discovered that living well in New York City is all about savvy spending. Upstate, we spent almost all of our “fun money” exploring Buffalo’s burgeoning food and cocktail scene, easily dropping $100 a pop. In New York, we’ve learned to take advantage of free and cheap entertainment. Sure, we can still spend over a hundo on dinner if we so choose, but we can also grab a chicken and rice from the corner cart and people-watch in Central Park. Some weekends, we hit up a cheap way-off-Broadway show, catch an open mic, or take advantage of Nick’s employer-sponsored free museum admission. By working a little harder to find offbeat fun, we also learn more about our new home — a win-win for our social lives and our bottom line.

When we went back to visit family over the holidays, we stopped by Buffalo Proper for a drink. Our bartender came over with a handshake and a question. “Was it worth it?” he asked. “Absolutely,” Nick answered confidently. I thought about the sleepless nights he spent in the weeks up to the move, the tumblers of whiskey, the agonizing late-night pep talks. I smiled, rubbing his forearm. “In fact,” he added. “I sort of miss the city. It’ll be good to go home.”

1. We Did Good, Billfold
2. Question Wednesday
3. What I Learned From Five Years of Writing and Editing for The Billfold
4. How a Program Assistant Dealing With a New Paycheck System Does Money
5. Classic Billfold: What I Wanted From My Move to Portland and What I Got
buffalomovingmoving seriesnyc