How My Budget Is Like a Personal Pan Pizza 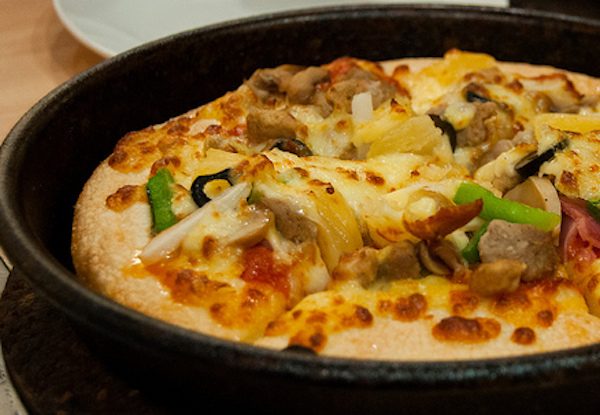 One of my favorite books, Ann Patchett’s Truth and Beauty, opens with the story of the grasshopper and the ant: The ant is diligent and self-sacrificing and plans ahead for winter, while the grasshopper goofs off and has fun instead. When winter comes, the unprepared grasshopper has to beg the ant for food.

This story sticks with me, because while I want to be an ant—and while I’m diligent and organized about some things—when it comes to money, I’m a grasshopper at heart. I like pretty things, and fun things, and expensive things. I like taking trips that require air travel. I like Sephora. I like getting my hair colored. I like going to dance class at $17 a pop. I didn’t understand the value of buying generic until my final year of college, when one of my friends actually had to explain to me that the CVS brand was fine. This came after a summer spent living lavishly for one month, then surviving on tuna sandwiches for two more because I’d blown through my newspaper internship stipend.

I didn’t become frugal until I lived in Paris after college on a government salary, and even then it happened by force, because Paris was so expensive that even buying something like an umbrella became a decision I’d spend weeks agonizing over. Did I really need an umbrella? Could I just wear a cotton hoodie under my not-waterproof jacket? The answer was no, but even then, I treated anything that cost more than seven euro as a serious investment; if I spent foolishly, I wouldn’t be able to eat. That year, I rarely bought things I wanted, and sometimes even things that I needed. I got the umbrella, but never a warm coat, which would’ve hardly been frivolous given my two-hour commute to work in the Parisian suburbs, through multiple chilly train platforms and snow during one Europe’s coldest winters on record. When I came home to Seattle, I found I’d learned how to budget under duress, a tactic I had to unlearn as I became more financially stable.

I oscillate anxiously between two modes when it comes to personal finance: lentils and austerity (Paris), or buying whatever I want whenever I want it (college). I’m prone to justifying the latter during periods of personal or political upheaval (see: all of the print subscriptions I purchased on November 10, or the suede boots I bought after the end of a three-year relationship) but I am 30, and I work in an industry that isn’t exactly noted for great pay, so this year I finally got real about living well on a budget.

I started by observing my spending habits. This was terrifying but educational. Because the idea is to live well on a budget, and because I already know most of my spending is pleasure-driven, I started by identifying spending that wasn’t adding to my quality of life and eliminating it wherever possible. Turns out, my albatross is a classic: I was eating too many of my meals out. Even worse: I didn’t like them. I was blowing a huge chunk of my income on to-go orders for sad desk lunches—lunches I probably wasn’t even tasting because I eat while I’m writing and editing. I love my daily coffee break, which gets me out of the office and fosters the workday equivalent of shower thoughts, but unless they were birthday gatherings or meetings, I realized that all of my workweek lunches came with a side of existential dread.

So I cut out all of those lunches and became one of those insufferable Meal Prep People. I still go out for meals and drinks with friends, but I limit them to what I know I’ll enjoy—after-work rosé with a former coworker, reasonably priced Sunday brunch with friends, Friday patio Rainiers with my officemates, and, when fall arrives, all the Pumpkin Spice Lattes I want.

I meal-prep every. single. week. in a marathon cooking session on Sunday night. It’s a couple hours out of my weekend, but because I actually love cooking and listening to podcasts while I prepare my food, it feels more like a soothing ritual than a chore (which is what weeknight cooking almost always feels like to me). When everything is done cooking, I separate it into meal-sized portions and put them in the fridge. This is what I’ll eat all week long for lunch and dinner. I don’t miss the depressing salads.

Another thing I don’t like that I was spending all my money on: rideshare apps. This one is especially outlandish, because unless I get a woman driver (for safety!) who isn’t too chatty (for introversion!), I hate taking Lyft. But you wouldn’t know it from how frequently I was using the app. Even worse: I HAVE A CAR. I have a car, and a bike, and a bus pass, and I was still using Lyft an unreasonable amount. Lyft rides are now strictly reserved for late-night rides home when I’ve been drinking, and occasional airport pickups when transit isn’t an option.

Then, of course, there was the portion of my budget I was spending on pretty things: clothing. This is the one overspending category I actively love. But I knew I had to cut down, so I started using an app called Parcel to track my clothing budget. When I see something I want to buy, I save it to the app and wait to buy it. If it goes on sale, the app notifies me, and then I’ll buy it if it’s a good enough deal and if I’ve been sticking to my budget.

My self-imposed financial rewards system is basically an adult version of Pizza Hut’s Book-It Program, the beloved ’90s literacy campaign wherein children could win a Personal Pan Pizza coupon if they read enough books—only, my books are meals I don’t eat out, and my Personal Pan Pizza is being able to continue paying someone to make me slightly more blonde than I actually am. It’s pretty simple: bring your meal-prepped lunch, and you can get a fancy coffee. Pay your bills first, and you can buy something you’ve saved to Parcel, if you still want it. Eat at home most nights, and you can go out for dive bar hot toddies with a friend.

This doesn’t mean that I don’t sometimes deviate from my budget—I will probably always be a grasshopper at heart—but it does mean that when I make mistakes, I’m more forgiving of myself. I’m also less panicked, because after years of spending irresponsibly, I finally know how to get back on track.

Megan Burbank is a writer and editor based in Portland, Oregon. She sends out a very sporadic newsletter called The Killjoy Report.

1. We Did Good, Billfold
2. Question Wednesday
3. What I Learned From Five Years of Writing and Editing for The Billfold
4. How a Program Assistant Dealing With a New Paycheck System Does Money
5. Classic Billfold: What I Wanted From My Move to Portland and What I Got
book-itbudgetingpersonal pan pizzasrewards