The Billfold
75 Percent Off 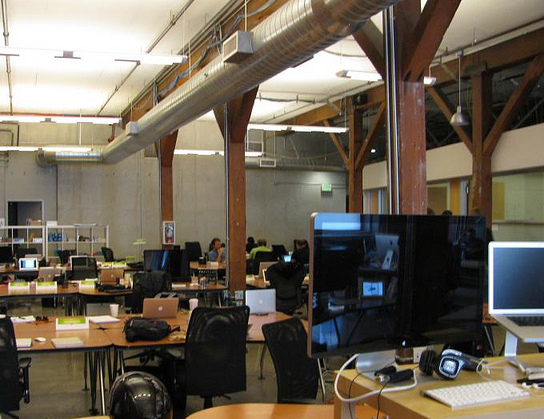 I never went to grad school, but I thought about going a few years ago, back when I was working a job I hated. Instead, I decided to quit that job and move to Chicago, because that seemed a lot cheaper than getting an MFA. While my move didn’t technically add any student loan debt, it did mean being severely underemployed for about three months longer than I budgeted for at the time, during my first-ever Chicago winter in 2011.

I worked part-time at Macy’s that holiday season and found myself slightly missing office life. It was cold, I was new to the city, and getting a reporter job at the Chicago Tribune was way harder than I thought it was going to be! Still, all of that time paid off months later when I was asked to interview for a job at Groupon.

This was right after Groupon had become really popular, and—lucky for me and hundreds of other unemployed Millennials—the company wanted to grow. The economy still sucked, but that winter, Groupon had just turned down a nearly six-billion dollar buyout offer from Google. Instead, they took their venture capital cash and rented out multiple floors of two different downtown Chicago office buildings.

I had applied to work in Groupon’s editorial department as a fact-checker. I was interviewed by a parade of 20-somethings in a process that was equal parts, “what are your relevant skills?” and “with which Wes Anderson character do you most identify?” Apparently Margot Tenenbaum was an acceptable answer, because I was offered a job—just as I was about to run out of money. I started two weeks later.

In my company orientation, I trained along with more than 100 other new hires, most of them salespeople. The next day, the 20 or so of us starting in the editorial department were seated in a conference room together. It genuinely felt like the first day of school. We were asked to share a fun fact about ourselves and name an animal we resembled. I said the honey badger, because it was 2011.

There were tons of us working there, from places like Michigan and Wisconsin and the Chicago suburbs. We were all in our early 20s and none of us knew what we were doing. Our bosses were fellow Millennials who’d been lucky enough to have been hired a few months before us. They quickly got promoted, mostly by the virtue of being the most experienced people in the room.

I was assigned to share a cubicle with a woman named Sarah. Sarah was from Salt Lake City, but had been in Chicago for more than a decade. She was 30, making her at least four or five years older than anyone else on our team. By the time I met her, she’d been working at Groupon for five months and was pretty much over it. I would later find out that she had a master’s degree in urban planning and was killing time at Groupon until she got a better gig.

Sarah was not thrilled to have to suddenly share a cubicle with a 24-year-old from Ohio. She looked up at me when we were introduced, and then she went right back to editing the coupon she had pulled up on her screen. That was our job, and she was there to do it for eight hours and then leave.

I spent a lot of time early on exploring my new office. I’d gone from working at a nondescript building in the Columbus suburbs to a skyscraper in downtown Chicago. From our floor, we could see the Chicago river when they dyed it green for Saint Patrick’s Day. In one building, there was a game room with a Nintendo Wii and a common area made to look like some trees in the woods, complete with swing sets hanging from the ceiling. The conference rooms had funny names pulled from 90s TV show references, things like Aggro Crag and The Blue Barracudas. The walls were painted green and orange, and someone’s huge David Bowie poster hung in the hallway. In the main lobby at headquarters, there was a sculpture of a giant cat in a green spaceship. That was what all the newspapers and magazines loved to photograph when they came to write articles about Groupon, the quirkiest place to work in Chicago.

Everyone was young and attractive and almost exclusively white. We wore jeans and hoodies every day and they supplied us with unlimited cans of La Croix. I heard that they used to cater lunch every day but they had to stop, probably because some accountant pointed out that it was a terrible idea. At an all-hands meeting one time, they gave every single employee a giant, blown-up stability ball, already inflated. I always wondered whose job it had been to blow them all up.

One afternoon shortly after I started, I was in the breakroom getting coffee. Sarah, my cubicle mate, walked in after me. She complimented me on my necklace, which was a blue glass pendant shaped like the state of Ohio.

“Thanks!” I said. “I’m just glad I come from such an attractively shaped state. I doubt a necklace of somewhere like Utah would be as pretty.”

About halfway through making this joke, I remembered that Sarah hailed from Salt Lake City. She frowned and picked up her coffee cup before walking out.

I knew I was making an impression.

Awkward office interactions aside, Groupon was kind of a fun place to work, especially early on. As is the case with a lot of work environments, its greatest asset was its employees. At one point, Groupon had to have been subsidizing Chicago’s entire improv scene. Actors and comedians worked in customer service by day and did shows at the iO and Second City by night. I saw a lot of bad improv in my time there, but I met a lot of really great, interesting people.

Because I was new to Chicago and didn’t know anyone, starting at Groupon when I did was the best thing that could have happened to me. It’s where I made my best friends in the city, the ones I still talk to today and still visit whenever I go back. It wasn’t the perfect grad school experience and there was no degree at the end of my three years there, but I’m glad I went all the same.

One Friday afternoon after I’d been at Groupon for a few weeks, our department was swampedt. Our managers asked us if we could stay late and hunker down to clear out our workload before the weekend. We did, and by the grace of teamwork and the fact that there were 10 million of us, we got through the backlog. The managers handed out room-temperature cans of Old Style beer as a thank-you.

Sitting next to Sarah at our shared cubicle, I couldn’t help but feel happy to be part of a team. It was the first time since I’d moved to Chicago that I didn’t feel crippled by imposter syndrome.

“This is a weird place to work,” I said to Sarah.

She raised her warm can of Old Style and clinked it against mine with a dull thud.

“Cheers to that,” she said.

Meryl Williams is an Ohio-based writer who loves Rilo Kiley and roller derby. Sign up for her awesome TinyLetter.

1. We Did Good, Billfold
2. Question Wednesday
3. What I Learned From Five Years of Writing and Editing for The Billfold
4. How a Program Assistant Dealing With a New Paycheck System Does Money
5. Classic Billfold: What I Wanted From My Move to Portland and What I Got
career historygrouponmillennialsSarah and I got off to a rocky start but we're BFFs now