A Friday Chat About Methods of Transportation 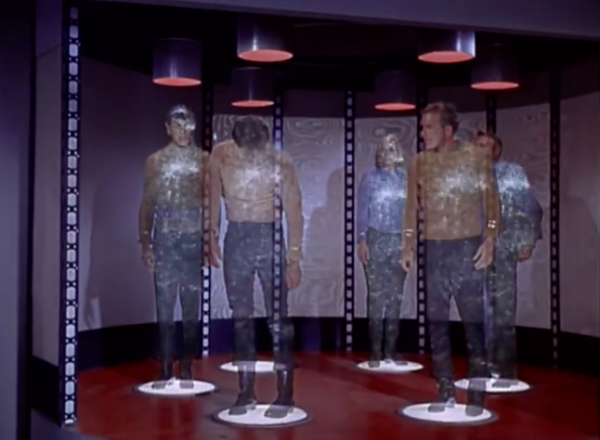 STEPH: You too! Happy three-day weekend!

NICOLE: Very excited for that. It’s going to be a four-day weekend for me since I’m also taking Tuesday off. Which will be the only workday I’ve taken away from work since… February.

STEPH: Wow! That is a long time between vacations. I took a bunch of time off in July, so I don’t have any upcoming vacations planned. But I’m also kind of burned out on travel for the moment, so that’s fine.

NICOLE: Yeah, it would be nice to do the vacation without the travel part, lol. WHERE ARE OUR STAR TREK TRANSPORTATION THINGS.

STEPH: Haha. Can we Apparate yet? Is Elon Musk working on this?

NICOLE: I did read something about the Hyperloop yesterday. It broke its own speed record! We’re still a long way out from Hyperloop travel, though.

STEPH: Yeah, there are folks talking about doing a Hyperloop thing here in Ohio to connect the major cities… but I’m not holding my breath. We can’t even get decent Amtrak service, so.

NICOLE: Not that Amtrak is all that great these days. Did you hear they’re thinking about making the seats smaller so they can squeeze more people in? They want to make that sweet airplane money.

STEPH: Ugh!! Also, I don’t get the chance to take Amtrak that often, but the last few times I have, there were plenty of open seats. I imagine that’s not always the case on some of the Northeast commuter routes, though.

NICOLE: The last time I took it (NYC-DC) we had a full train. It was one of my least pleasant Amtrak experiences. The bathrooms were disgusting.

STEPH: Yikes. I have had some very bad bus-bathroom experiences, so I can relate.

NICOLE: OMG BUSES. I did Greyhound once. Watched tiny spiders crawl down the seat in front of me.

NICOLE: Bolt Bus isn’t terrible, but I do try to never use their toilets.

STEPH: My husband was on a Megabus that hit a deer once. He was napping and awoke to people screaming “Oh, God, we’re gonna hit it!”

NICOLE: WOW. What happened? Did they have to stop? Or did the driver keep going?

STEPH: I think they just kept on going! Another Megabus on that same route (Cincy to Chicago) caught on fire a few years ago. They did not keep going that time, heh. See, I get smug about articles like the one you posted this week about the value of a dollar in each state, but clearly the Midwest needs help in other ways. 😀

NICOLE: Hey, a bus could catch on fire anywhere in the country.

NICOLE: So what’s your favorite way of traveling, when you have to? Bus? Train? Plane? Car? Really long walk?

STEPH: That’s a good question. I used to prefer flying, but I also have a lot of anxiety around it (not the flying itself, but the packing/getting through security/boarding process – ugh), so I’ve started getting more into road trips in the past few years. Cincinnati is a day’s drive or less from a lot of other cities—Chicago, Nashville, Pittsburgh, etc.—so there are plenty of options.

NICOLE: Huh, I guess you would be a day’s drive from Nashville. (I did a road trip to Nashville once. It was pretty cool.)

STEPH: Only four hours, actually! Also, last summer, we drove through Knoxville on our way to somewhere else, and it seemed really nice. Need to get back there. I also drove from Portland to Seattle once, which was fun, with the mountains in the background.

NICOLE: Now that’s a drive I’ve made (or technically ridden along in) several times. It’s beautiful. I don’t want to keep either of us from our long weekends, so any last words for The Billfold? Three-day-weekend advice?

STEPH: For Monday holidays, I always like to do something fun on Sunday nights, like stay up late or whatever. But on this particular weekend, Sunday night is the Twin Peaks finale, so we’re just going to be watching that and probably feeling sad that it’s over afterward. But everyone else, please go have some Sunday-night fun on my behalf!

1. We Did Good, Billfold
2. Question Wednesday
3. What I Learned From Five Years of Writing and Editing for The Billfold
4. How a Program Assistant Dealing With a New Paycheck System Does Money
5. Classic Billfold: What I Wanted From My Move to Portland and What I Got
chatstravel