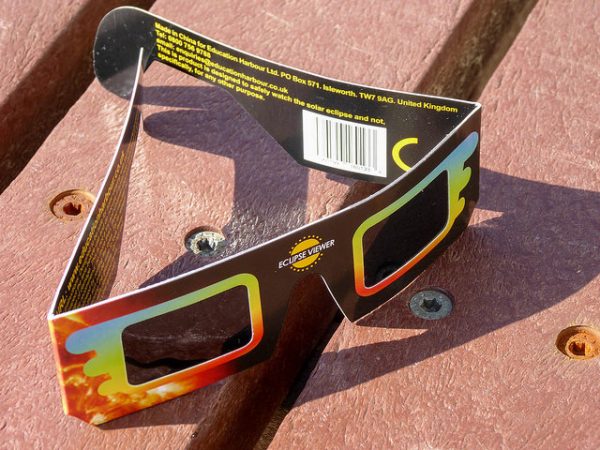 I promise that this will be my very last eclipse story, but it’s a good one: as Slate reports, people are currently trying to make a quick hundo by reselling their used eclipse glasses as collectors’ items:

Enterprising vendors have come up with a variety of selling points to justify the steep costs, often describing the glasses as historical artifacts. As one $100 listing in Portland, Oregon, reads, “These glasses are a rare treat for anyone interested in space science! These glasses actually witnessed the Eclipse! Not like the ‘new’ glasses so common on the net. Why buy new when you could own EXPERIENCED glasses!” Others emphasize how prepared the buyer will be for the next eclipse, given that the eyewear had just been proven to work. A seller in St. Louis, also asking for $100, wrote, “I know the Eclipse is done and over with. But why not have a pair of glasses, for keep sake? Plus you can always have them for the next Eclipse in 2024!”

I’m guessing that anyone who cared enough about the eclipse to value their cardboard glasses as something to lovingly display in a collection already has a pair of eclipse glasses. Right?

Let’s hope that at least some of these people trying to resell their eclipse glasses eventually decide to donate them to a good cause:

1. We Did Good, Billfold
2. Question Wednesday
3. What I Learned From Five Years of Writing and Editing for The Billfold
4. How a Program Assistant Dealing With a New Paycheck System Does Money
5. Classic Billfold: What I Wanted From My Move to Portland and What I Got
eclipseeclipse glassesexperienced eclipse glasses