Mapping My Career Through Conventions 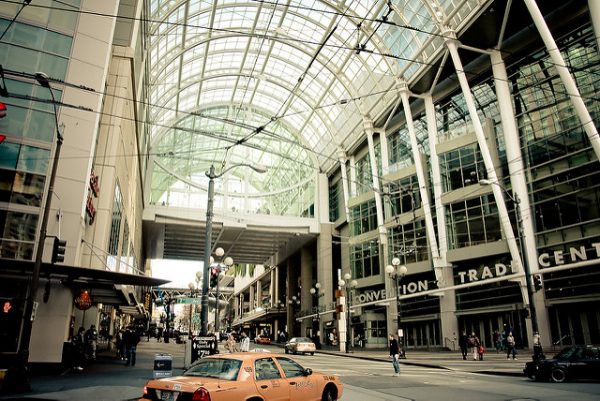 Earlier this week I wrote about the realization that I spent 10 percent of my pre-tax income on conventions and convention-related expenses (airfare, hotels, food, etc.).

This ~$6,000 convention and travel cost is my biggest business-related expense, and it’s an essential one; I can track my growth both through the work I complete and through the people I meet at conventions.

After I wrote about “tracking my growth through conventions,” Team Billfold asked if I could be more specific about that growth. Here’s a map of how conventions have helped my career, as clearly as I can explain it:

I went to my first official convention in 2010, after somebody shoved a flyer into my hand at the end of a They Might Be Giants show. The flyer was for MAGFest, and although I had no idea what MAGFest was (or what a convention was, really) I knew that I liked music and video games, and I decided to go.

I loved everything about the experience: the music, the people, the dealers’ hall, the rows of video games that anybody could play. I loved that I could stand in line for an event and start a great conversation with the person standing in front of me.

I also loved the idea that I could be part of MAGFest—not just an attendee, but part of the actual experience—simply by signing up. So I applied for a dealers’ table at MAGFest, and then I started looking around for other conventions and got involved with the very first Intervention. Both Intervention and MAGFest were small enough, at that point, that all I had to do to participate was email staff and ask them if I could play guitar in a conference room. (They’ve both grown considerably since then. I like to think that we’ve grown together.)

So there I was, working as an executive assistant and doing music as a hobby, and I went to Intervention and played a concert and people listened and they liked me and it was amazing. A few months later I recorded some CDs in my kitchen and printed them on my laptop, and then I went to MAGFest and picked the dealers’ table that was right next to the escalator—because MAGFest was still small enough that they let you pick your dealers’ table—and I played my songs for everyone making the long trip down the escalator into the dealers’ room, and a lot of people immediately got off the escalator and bought a CD.

That was how I got hooked on conventions, and I’ve been doing the “convention circuit” ever since.

As with freelancing—or any other type of work—you have to start at your level; some conventions were small enough that they were happy to have me as a dealer or a musician or a panelist, and others either turned me down or set their dealers’ fee so high that I knew it wouldn’t make financial sense for me to apply.

All of this happened before I transitioned into freelance writing, which was hugely beneficial to me because I had already put in the work of becoming a trusted entity, as it were. A lot of conventions were happy enough to switch me from their music track to their writing track (which is a fancy way of saying “they took me off the music panels and put me on the writing panels, except for that one music panel where they didn’t have enough panelists, or the one songwriting panel where they needed a mod”), and that’s when the career-changing connections started happening.

For example: I started going to Intervention in 2010. In 2013, Intervention co-founder Oni Hartstein walked me up to Boing Boing co-founder Mark Frauenfelder and said the equivalent of “Mark, meet Nicole. She’s a great writer. You should hire her.”

At that point in my career I was primarily working for content sites like Crowdsource (now OneSpace); I was still a few months away from sending my first pitch to The Billfold. Getting to meet Mark Frauenfelder and pitch him (successfully) in person was a huge freelance boost, and one that I wouldn’t have gotten if I hadn’t spent the past three years going to Intervention, getting to know Oni, and building a reputation as a professional.

One of the pieces I wrote for Boing Boing was about Seattle’s GeekGirlCon, another convention that I regularly attend. After the GeekGirlCon article went live, I was contacted by an editor at SparkLife who had read the piece. She wanted to know whether I was interested in writing for SparkLife, and I added one more client to my growing freelance portfolio.

Those are some of the more obvious connections, but there are also the kinds of connections that happen simply by showing up, year after year. I attended four JoCo Cruises before they invited me to become their official cruise blogger, and they probably wouldn’t have asked if I hadn’t already done the work of becoming an active participant in the community (and the work of building a freelance writing career).

Likewise, I went to a lot of conventions before I started to get invited to the parties that happen around the conventions, before I began turning convention acquaintanceships into actual friendships—and before I found myself in a situation where I could go to a con, have a friend casually say “hey, a bunch of us are going to dinner afterwards,” and then have a dinner conversation that turns into “what if we put on a show together?”

In that example the show was Marian Call’s Space Time, and we put it up in both Los Angeles and San Diego, and I got to interview NASA “Mohawk Guy” Bobak Ferdowsi onstage, talk-show-style, as part of the event. I then referenced Space Time as part of my “why I should write for you” email when I pitched Popular Science. I have NASA interviewing experience. I can talk about space even though I’ve never been there.

Last month I went to Norwescon, and here’s a very short list of how that convention benefited my career:

Even though I didn’t get any new clients from Norwescon, you can still see how all of these individual connections and interactions add up. I might end up seeing one of my fellow panelists at another Seattle event, and we might have a conversation, and over time we might become friends. Someone might see me moderate a panel and remember me three months later when they have a job opportunity. I’m better prepared to pitch my novel at PNWA, which might lead to better interactions with agents, which might eventually lead to me getting a book published.

I also give back, of course. When people at conventions ask me for advice, or ask for a few minutes of my time to talk about their careers, I am more than happy to sit down and talk. I have ducked into conference hotel rooms to add my voice to just-getting-started podcasts, I’ve talked with freelance writers about how to get their first clients, and I’ve tried to help the community at least as much as it has helped me.

So that’s why I spend 10 percent of my income on conventions. I will now open the panel up to questions, so drop ’em in the responses and I’ll reply to as many as time allows!

1. We Did Good, Billfold
2. Question Wednesday
3. What I Learned From Five Years of Writing and Editing for The Billfold
4. How a Program Assistant Dealing With a New Paycheck System Does Money
5. Classic Billfold: What I Wanted From My Move to Portland and What I Got
conventionsfreelancingwriting