The Cost of Poly Dating 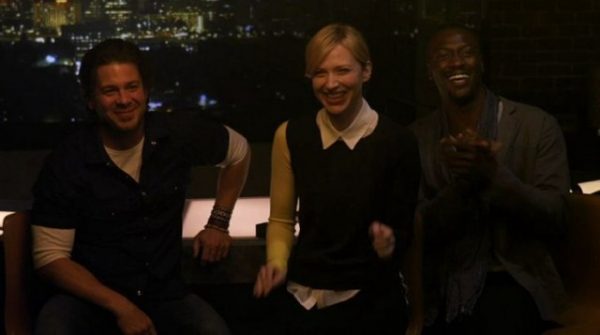 I used the word “often” specifically, as in “often, not always.” Keep in mind that there are many different types of polyamory; there’s the triad, where three people are in a relationship (as illustrated above by our lovely — and canon — Leverage triad, or in The Toast’s brilliant essay “Fit For a King: A Queer Poly Triad Buys a Bed Off Craigslist”), there are a number of variations on the idea of a “primary” partner and “secondary” partners, and there are also poly relationships that don’t include those types of labels.

Since I am not polyamorous myself, I’m hoping that people who want to continue to speak to the nuances of poly relationships can do so in the comments. You should also read the FAQ at More Than Two, which I confirmed was a good source on “Poly 101,” and which includes this quote that is relevant to our discussion:

Many people believe that a person who has multiple loves can’t give their “whole heart” to any person. The belief goes that if you love one person, you can express your love wholeheartedly, but if you love multiple people, your love is divided up and is therefore not as deep. This is based on the “starvation model” of love — that is, you only have a limited amount of love, and if you give your love to one person, there is none left to give to anyone else — so if you fall in love with another person, you have to “pay” for it by withdrawing your love from the first person.

Love is not the same thing as money. With money, you have only a limited amount to spend, and when you give it to one person you have less left to give to another. But love behaves in wonderful and unpredictable and counterintuitive ways.

So how do people in poly relationships handle the cost of poly dating? I chatted with Vicki, in NYC, and Diana, in Boston, to learn more about how each of them manage their finances within the context of their relationships.

Here’s Vicki: “I am married with a 10-year-old child. My spouse works a regular, well-paying corporate job. I am a freelance writer/webwrangler and a reproductive health activist. My spouse and I own a house together, and overall have merged finances, though we each have a modest amount of money in individual accounts.

“I have another life partner as well. She maintains and pays for her own apartment, but also keeps things at our house. She and I do not have merged finances, as we have fairly different financial styles, she has some debt that neither of us would want me to take on, and we don’t own anything together.

“But effectively money I spend with her does come out of the household finances. So for those who looked at it that way, it could seem as if I’m spending ‘my spouse’s money’ on my girlfriend. But we don’t think of it that way.”

And Diana: “My finances are weird and wonky for reasons completely unrelated to poly, actually. I just got back from a year or so teaching English in China, so the whole ‘settling back into life in the US and finding good-paying employment’ has made things exciting.

“That said, the fact that I do have these two partners definitely does not make it simpler. I’m only dating my partners/sweeties (see: spending all that time in China), so finances are limited more to dates and gifts and travel. One of my partners lives far away as well, so a lot of my costs there are visits to him.”

Vicki summed up why poly dating can be a significant expense: “I guess being poly, I never stopped dating and don’t intend to — so those expenses that come up when you’re first trying to get to know someone can come up again and again. Though I find when I date men, even poly men, they often fall into traditional gender roles and want to pay. But especially if something’s going to stay casual, at a dating level and not turn into something more entangled, you can be at that expensive going-out stage for a long time.”

Both Vicki and Diana spoke to the importance of communication — the foundation of any relationship, but crucially important in poly relationships — and discussing expectations that made sense with each person in the relationship. As Diana explained: “Part of the whole ‘starting to date’ thing for both of my partners has been talking about where we stand on gifts and stuff. If I were dating someone who wanted to do lots of fancy things, I’d see it as a thing that he and I would do as part of our relationship, and appreciate the things that my other partner and I would do as part of ours.”

Vicki echoed this idea: “My budget’s usually not that tight, as long as I don’t get ridiculous, but several of my regular partners — my girlfriend, the musician I see regularly — are tighter financially or have more variable finances. Sometimes if I really want to do something, I’ll just treat, but that’s not really emotionally sustainable. It’s much better to do whatever meets everyone’s budget.”

Vicki also noted that adjusting financial expectations, including the actual cost of the date, to meet different partners’ budgets was an important way to avoid resentment and emotional stress — not the stress of knowing that one partner gets more expensive dates than another, but the stress of the partner with less money not being able to contribute equitably to the relationship. “I think like anything in poly life, it’s good to make your choices about how finances are set up pretty explicitly, and to talk about them.”

It’s also important to think of partners’ income and resources outside the context of “they make more/less than me, so we should have these types of dating experiences.” As Vicki explains, “My girlfriend’s actual income is a lot higher than mine, but she has different expenses and we make different choices about how to spend and save money.” It is always about communication.

Both Diana and Vicki talked about saving money by having Netflix dates at home in lieu of going out to a restaurant or show. However, Diana is hoping to move in with one of her partners in the near future, and is well aware that this might come with its own extra costs.

“One of my sweeties and I have been thinking about moving in together, and poly would definitely complicate that,” Diana told me. “Where a monogamous couple would naturally gravitate towards a one-bedroom place, I’d want a two-bedroom because I wouldn’t want to kick him out of bed.”

Vicki, who owns a house with her spouse, notes that there are also cases where being poly can save her money: “Sometimes being poly can have some cost savings — for example, when one of my partners hangs out with my son while I’m out with the other one, I’m not paying a sitter.”

The cost of poly dating is not specifically different from the cost of monogamous dating — both involve communication about how much each partner can afford to spend on dates, whether resentment will build up if one partner always treats the other partner, and whether it makes more sense to go out to a new restaurant or stay in and watch Leverage — and as Diana explained, it’s “dating, but times two.”

But Diana also told me that “the SO x 2, 3, 4, etc. costs can mount in ways you wouldn’t expect,” which makes sense. I know that any time there’s love or connection or the desire to get to know someone a little better, money often follows. (Again: often, not always.)

Still, as More Than Two puts it, even with limited money to spend, love works in wonderful and unpredictable and counterintuitive ways.

Or, as Vicki put it, “Netflix is like the Internet’s greatest gift to humanity.”

This story is part of our relationships month series.

1. We Did Good, Billfold
2. Question Wednesday
3. What I Learned From Five Years of Writing and Editing for The Billfold
4. How a Program Assistant Dealing With a New Paycheck System Does Money
5. Classic Billfold: What I Wanted From My Move to Portland and What I Got
datingpolypoly-dating