The Cost of Losing Your Keys 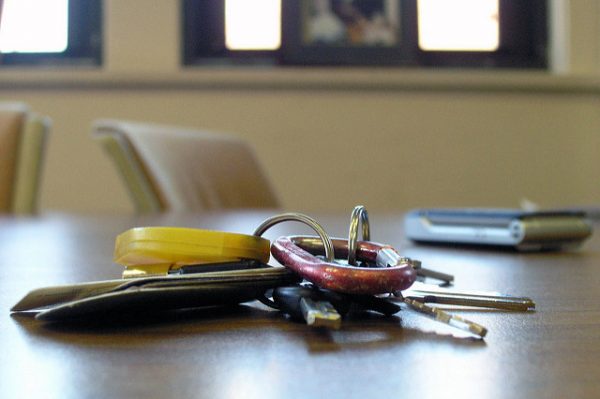 It was a hot and sweaty Chicago afternoon. I was taking the bus home after meeting up for a lunch date in the middle of my workday. I was two stops from my apartment and it seemed like it might be as good a time as any to fish my keys out of my messenger bag. They weren’t clipped to the keyring as usual, so I figured I must have thrown them in my bag absentmindedly while trying to connect to the public Wi-Fi on the plaza earlier that day. My grasping search turned up nothing, so I hiked up my three flights of stairs and dumped the contents of my bag on the landing outside the door — the keys weren’t anywhere to be found.

My roommate was out of town, so I texted the landlord to ask if there was anyone working on the building that day to let me in, lying that I’d locked myself out. He was in the neighborhood, and came to unlock the back door while chastising me for missing one of the five locks on the doors when I had left (“it’s really much safer to lock them all”). After getting into my house, I could recover my spare house and car keys, but I was on my own to remember what else was on the ring. Okay, cancel the library card and gym card, but was the key to the Nashville house on the key ring? Did I remember to give my ex’s spares back, or were they still nestled next to my house keys? Had I grabbed our only copy of the mailbox key on my way out that day?

The next morning, I decide to Lyft back downtown (a cool $8 on Lyft Line) in the hopes that someone might have turned the keys in to one of the stores or office buildings near where I’d been sitting outside. The more I think about it, the more I realize what probably happened: there hadn’t been any available tables when my date and I sat down, so we’d leaned up against a flower bed, and my keys must have fallen into the bed of dirt behind us. When we moved to a table, we left my keys behind.

I walk into the CVS, the office building, and the Nutella café across the street, but no one has turned in my keys. The office building’s security guard gives me a phone number to call on Monday when the full-time staff is back on, but I’m not hopeful. I scour Craigslist and another local lost-and-found website, but no mention of a generic keyring with Planet Fitness and Chicago Public Library keycards. Google tells me that occasionally lost items get turned in at the police station, so I call their non-emergency line. The lady tells me what station they would have been taken to, and I hop on the L ($2.50) over to see if it’s my lucky day (spoiler alert: it’s not, and I basically get laughed out of the building).

Since I probably won’t be reclaiming my keys anytime soon, I decide to just call it and work with the spares I have: house and car keys, at least. I keep the house keys in a pouch on the water bottle I take to the gym, and make it through Friday and Saturday without incident. On Sunday, I’m running late to hang out with my friends, so I pop out of my house with my car key, locking the door handle behind me… without the house keys that are in my gym bottle.

My roommate is still away, so I text the only other backup I have nearby — my ex. I offer to drive out to the suburbs to pick up my keys, so he doesn’t have to do any work and doesn’t even have to see me if he just places them in a mailbox or something. It’s an hour trip one way, but it seems less expensive than calling a locksmith or my landlord, who made it pretty clear that helping me in the first place was a one-time-only courtesy. Rather than being helpful, my ex tells me it “seems stupid and expensive” to make a two-hour round-trip to pick up the spare set he still has, so I do some Googling and call what seems like the cheapest locksmith.

The thing about searching for a locksmith is that it looks much cheaper than it ends up being — they advertise $15 rates, but don’t tell you that’s just the cost of showing up. They charge extra for labor. $115 and ten minutes later, I’m standing back inside my house. Yes, an impromptu roadtrip to the ‘burbs would have been a hassle, but it sure would have been cheaper than this.

It’s clear that I won’t be able to manage without a keychain, so I hop on Amazon. If I have to replace the keychains on my old set (many of which were more sentimental than functional) I might as well grab a $13 Great Northern Lodge hotel-style one. I also stop in to the nearby library branch to get a $5 replacement card so no one can use my barcode.

Copying my house keys and distributing them to a group of friends who will be more easily accessible in the event of a similar future incident ($7 for six keys) also becomes a priority, and I pile it on the spend sheet.

A couple weeks later I realize that I had definitely had the only copy of our mailbox key on that now-lost keyring. I let YouTube convince me that fixing this problem will be an easy process, so I order a replacement lock ($6.57 on Amazon) and, two days later, I’m standing at our mailbox bank with a few wrenches, a pry bar, and the conviction that I will not spend any more money on this mistake. Breaking into the mailbox proves unsuccessful, so I do have to call another locksmith ($97) — but hey, I get a $14 discount for having my own lock!

There are still a few things that I haven’t bothered to replace, like my spare car key. Because I have a “modern” car with a combination key/fob, there aren’t any key copiers that can duplicate the key-only part. The dealership is happy to replace it, though, starting at $270! While impulse shopping at Bed Bath & Beyond, I check out their key copier — the KeyMe machine can duplicate the key starting at $89.99 and ship it to me a few days later, but I decide to pass.

And also, like, sell my car, since getting a spare key at this point would cost almost as much as a car payment.

Desi Rottman lives & eats (primarily) pizza in Chicago, and chronicles the latter on her blog, Desi Does Pizza. When she’s not waxing poetic about money or pizza, she’s training for her next race or Tweeting @desilove.

1. We Did Good, Billfold
2. Question Wednesday
3. What I Learned From Five Years of Writing and Editing for The Billfold
4. How a Program Assistant Dealing With a New Paycheck System Does Money
5. Classic Billfold: What I Wanted From My Move to Portland and What I Got
getting things replacedkeyslife-lessonslocksmith