A Friday Chat About Arts and Crafts 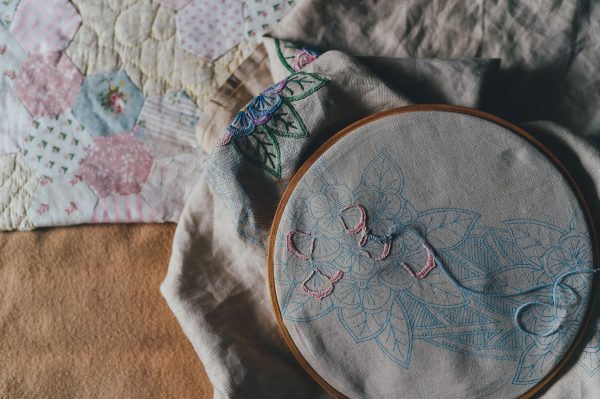 Photo by Annie Spratt on Unsplash.

NICOLE: It’s supposed to snow this weekend in Cedar Rapids, just like it snowed twice already this week. I am so tired of snow.

THEOTHERGINGER: The best part about living in the South: NO SNOW.

THEOTHERGINGER: Also, lots of sun. It was gray for like five days and I was like, time to pull out the sad lamp.

NICOLE: Does that work? I know so many people who have them.

THEOTHERGINGER: I got one after I had a concussion. A family friend was a neuropsychologist who kept up with the research way better than my doctor, so she sent me an Amazon link and I clicked on it. It’s supposed to be good for building up brain connections or something? And, has the side benefit of being good for gray gray gray days.

NICOLE: Oh, I hadn’t heard about the brain connection thing! I only knew about the Seasonal Affective Disorder part. I just finished reading Why We Sleep and I am very interested in the relationship between artificial light and brains right now.

THEOTHERGINGER: Oh I don’t want to know. I co-sleep with my laptop. (Edith Zimmerman said that in an interview once and I was like IT ME.) Can we talk a bit about how crafts and DIY aren’t a way to save money?

NICOLE: Totally! What did you try to craft, and how much did it cost you?

THEOTHERGINGER: I just started cross-stitching. I had had the fabric in my Amazon cart on and off for 1–2 years and a pattern on Etsy for like a year or more.

THEOTHERGINGER: I used to knit and do crafts as a kid, and all my friends in undergrad and I would knit and watch chick flicks (this was pre-militant feminism). Then it got too stressful, so I freecycled away all my knitting stuff and gave away all my embroidery floss to a former colleague’s kids.

NICOLE: That makes sense, I was super into embroidery as a child (the whole American Girl thing).

THEOTHERGINGER: Oooh we did not have that in Canada. I just… read Anne of Green Gables and Little House. (Sidebar, read A Wilder Life if you were a Little House fan. It is part bio, part memoir, part everything good in the world.)

So it was actually pretty cheap to start. AndNowLights sent me the embroidery floss and a ring, and then i bought the fabric + needles from Amazon and a pattern from Etsy.

NICOLE: How much did that all cost?

THEOTHERGINGER: I’m checking my Amazon order history. The mail I think cost the sender around $10 and the pattern was $7. The fabric was $8.99 and the needles were $1.29. I know Michael’s and Jo-Ann’s always have sales but Michael’s is in the super far suburbs and Jo-Ann’s is affectionately known by some good friends as a hellscape.

NICOLE: Hahahahahaha. I would also just order the stuff off Amazon, or maybe go to my local fabric store, but not Jo-Ann’s.

THEOTHERGINGER: Yeah, I am here for local business, but unfortunately the best local businesses near me are shoe repair, bars and restaurants, and mechanics. Not like stores that are useful. (I do go to the shoe repair place a fair bit because somehow I do weird things to dress shoes when I bike in them. Maybe I should stop doing that?)

NICOLE: (Ehhh, I bike in whatever shoes I’m wearing.)

NICOLE: Okay. So you put off buying, like, $15 worth of embroidery stuff for two years. Then what happened?

THEOTHERGINGER: IT IS THE MOST FUN EVER! It is the least practical thing, and it’s all I want to do when I am home. I’ve gotten through a ton of podcasts and also trash TV. I’ve now started watching The West Wing and i expect to binge it and do more cross-stitching. HOW HAVE I NEVER SEEN IT BEFORE?

NICOLE: If you’re my age, it aired while you were in college and you were too busy with extracurriculars and also you were a young woman who didn’t want to watch a show that looked like it was about 12 guys in politics?

THEOTHERGINGER: I mean, it still is.

NICOLE: There are at least three women in the cast at any given time!

NICOLE: I’m 36, so you’d have been in high school when it aired. Makes sense that you didn’t see it.

THEOTHERGINGER: Yeah, that makes even more sense. We didn’t have a TV that worked very well (this was very much on purpose by my parents). It got three channels, and didn’t have green or red (I forget). It was a hand-me-down from my mom’s cousin who lives in the same city as my parents.

NICOLE: Hahaha we got three channels too! Those were the days. But you were going to tell me that crafts and DIY weren’t a good way to save money. Right now it sounds like you’ve spent $15 for hours of fun. What else might have you bought if you had idle hands?

THEOTHERGINGER: Dammit! This is not going how I wanted. I would have bought the devil’s workshop… that’s what happens with idle hands, you know.

THEOTHERGINGER: I probably would have really bought beer or wine and chocolate chip cookies. They are my most favorite. Basically, a craft is a way to have fun but is not practical. It takes forever, but it is good for the mind. Okay, so, I should go. But first! I think you should know that I am drinking Huel as we chat. It is the best emergency food.

NICOLE: HUEL IS SO DELICIOUS.

THEOTHERGINGER: I may buy a bit more to keep in my office (where I am now).

NICOLE: Do it do it! And buy more embroidery floss, too. Don’t wait two years!