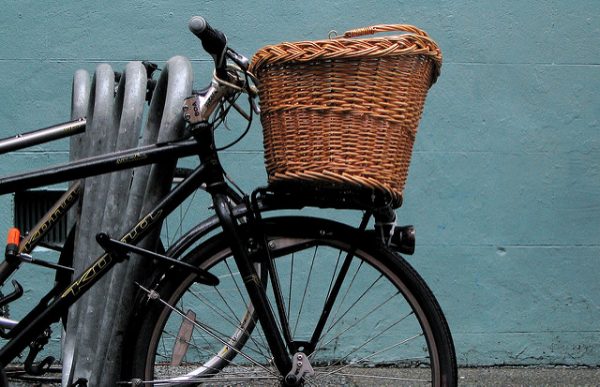 Of all the things money can get you, freedom has got to be tops. So I’m a fan of the gig economy and all its promises of personal and financial independence.

I participate in the gig economy as an independent contractor. I like setting my own schedule, and, for the most part, being my own boss. This all works fine when it comes to my career as a journalist. But these days it’s hard to pay the bills with just freelance writing, so I also work the evening shift as a bike messenger.

I generally say that I’m a bike messenger rather than bike courier even though the parcels I transport are more likely to be boxes of muffins or gallons of yogurt than envelopes of paperwork. I’m just often met with blank stares when I tell people I’m a courier. (“A career what?” is the usual response.) So I just say messenger because it’s understood, if less accurate. Still you can’t tell me my job doesn’t hold all the challenge of messenger work just because I lane-split traffic packing thirty pounds of chow mein instead of a subpoena.

I used to work 9–5 for several delivery companies, running everything from flowers to fish eggs to purses left behind at lunch counters. But I cut back my hours in the saddle as I took up more serious career pursuits. These days I work for only one company, Food Runners, relaying excess food to homeless shelters and rehab clinics. (Even though the website describes my role as “volunteer,” I assure you this is paid work.)

The work is a regular Monday-thru-Friday job, from about 2 p.m. until 6 p.m. Though I work the same steady part-time hours that an employee might work, Food Runners still counts me an independent contractor. Which also means, according to the city of San Francisco, I’m my own business. And, according to a letter I received from City Treasurer José Cisneros, I’ve got some explaining to do.

I haven’t paid business tax to San Francisco since I started working for Food Runners last year, which means I owe $442.40 in registration, interest accrued from late payment, and administration fees. That’s around 90 percent of a week’s paycheck (or, in another context, 60 percent of my monthly rent) even though the cost for my payment bracket shouldn’t be more than $90. Of course I understand that there would be additional fees on account of late payment, but this includes a $187.40 charge just for doing business in 2018. A figure more than twice what I should be paying as someone who only makes around $24k a year as a “business” in San Francisco.

Food Runners never told me I needed to register as a business. They told me I was an independent contractor, they told me that my income would not be taxed, and they told me I would need to take care of my taxes myself. But this? Nothing.

The letter I received was not helpful. Nor was the Office of the Treasury’s website. There were no phone numbers given. No explanation of how the treasury had arrived at the figure of $442.40 and no email for “should you dispute this figure.”

In the end I decided to pay the $442.40 fee, plus an additional $11.28 “courtesy fee” for the privilege of filing online. Usurious fees from government agencies are like tributes to Genghis Khan, I figure. You can pay, and maybe you won’t be crushed. Or you can fight and be annihilated.

Business registration is just one more part of the hidden cost of the gig economy. It’s another thing they don’t tell you about when you start working, especially when regularly scheduled Monday-thru-Friday work doesn’t exactly feel like a “gig.” Sometimes it’s hard to wrap your mind around just how much you have to pay just to stay broke.

1. We Did Good, Billfold
2. Question Wednesday
3. What I Learned From Five Years of Writing and Editing for The Billfold
4. How a Program Assistant Dealing With a New Paycheck System Does Money
5. Classic Billfold: What I Wanted From My Move to Portland and What I Got
gig-economysmall businessesthe-sharing-economywhen you're an employee in everything but name