What Else Do You Do? 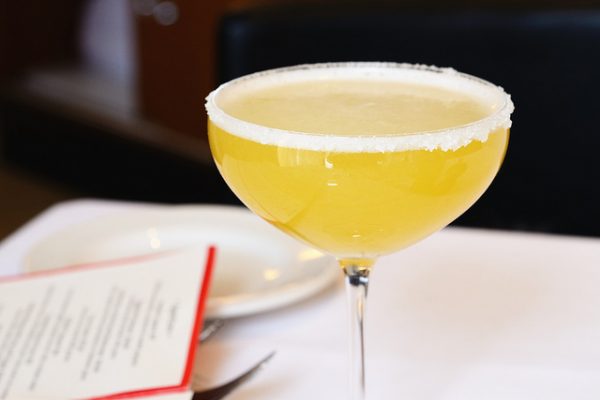 At the end of my shift, the head of the table stopped talking to his guests and signaled to me with a hand in the air. “So, Nick,” he asked, with little apparent malice, “what else do you do?”

My stomach dropped. I hate this question. Every server I know hates this question. If I’m feeling empathetic, if I’m doing my job, I’ll respond honestly. But that January night was rainy and gross outside and my final table—that table—was keeping me for an hour past quitting, so I was cagey. I leaned back on the balls of my feet, gave them a little shrug, and said: “I make dinner. See movies. Read books.”

At home, I seethed. “How dare they ask me that question,” I said to my girlfriend. “I don’t walk into their doctor’s office and ask them what else they do with their life.”

I took to social media. “Fellow servers,” I wrote, “how do you respond to the ‘What else do you do’ question?”

Antonio, a longtime Chicago server friend, wrote first: “Tersely,” he said. “Usually with a smug look on my face. ‘Travel, explore food culture, enjoy my freedom, cherish being my own boss and taking time for me when I want.”

Katie, whom I once cast in a play, summed it up nicely: “I usually make a wounded face and say something like: ‘Ohh. Are you. . . .are you saying a job in hospitality isn’t real?’ I think it embarrasses them and makes them feel guilty for insulting me.”

“Why are you so worked up?” my girlfriend asked. “You do tons of other things. You could have just told them.”

She’s right. I’ve been waiting tables on and off since 1998. I’ve worked at nearly twenty different restaurants in that spell. I’ve always had a side hustle.

In high school, I cut my teeth at the local Bill Knapps in Farmington, Michigan, a famous Midwestern family chain that served chicken fricassee and “Mom’s” meatloaf. In college, I donned a tie and crisp white shirt to learn about food and proper fine-dining etiquette at the Alexander House in Oxford, Ohio. When I wasn’t in rehearsal or partying, I was there. In many ways, it was better job training than my acting program, as I’m still working in restaurants and long ago gave up the acting dream.

My first few years in Chicago I worked like mad, bouncing from restaurant to restaurant while breaking in to the city’s theater scene. In one four-month stretch in the winter of 2006, I worked five shifts weekly at the old Vong’s Thai Kitchen in River North, performed a children’s play three mornings a week in Rogers Park, rehearsed and opened A Christmas Carol in Lincoln Park, production-managed my first play, and began producing live storytelling events with 2nd Story, my artistic home to this day.

I worried I wasn’t living my life correctly. I made enough money but never socked anything away for a rainy day. I retained health insurance on and off but rarely went to the doctor. I plunged excess income into bars, cabs I took to get home, cigarettes I tried like hell to quit. When I got the “what else do you do? question back then, it was always the same people asking: white men who were my father’s age range and type—middle-class Midwesterners—whom I suspected saw a bit of their offspring in me. I was happy to answer: “I’m an actor/producer/please god get me out of this industry.”

I told myself I’d have to leave the restaurant industry some day, but I failed to imagine what I’d leave it for. I didn’t want office work. I didn’t possess other skills. Make it in theater or wait tables forever. Those felt like the only two options.

I see now that a middle-class anxiety seeped into how I once felt about restaurants. I’m a white kid raised in the suburbs by public school teachers who retired with sound financial prospects. I earned a college degree. I’m not “supposed” to spend my life waiting tables, which is still seen as the pejorative activity recent college graduates perform when they’ve exhausted all other options.

But waiting tables could actually be the smart post-grad career move. As the NYT pointed out last year, the job market for graduates is broken: “Since 2002, inflation-adjusted pay for college graduates has risen a measly 64 cents an hour.” Over a similar period, servers’ annual median salaries have increased by eleven percent, a full dollar an hour. The top ten percent of servers have seen their inflation-adjusted wages increase by thirty percent.

Of course, not all food service workers are servers. There are nine million restaurant workers in this country, many of whom earn very low wages. The Fight for $15 labor advocacy and the growing movement to eliminate tipping could increase those wages for everyone, but that’s a delicate balance that involves negotiating rising food and labor costs, a line cook shortage, and top-end workers (i.e. waiters like me) who won’t want their own wages decreased. My own anxieties are a pittance compared to the real concerns of workers whom I’ve spent most of my life working alongside. Everyone needs to be paid more.

In the summer of 2010, I began a dream job as the Casting Assistant at Steppenwolf Theatre Company, the Tony Award-winning home of Tracy Letts, Amy Morton, and Tarell Alvin McCraney, among others. A half-decade of hustling prepared me for a sought-after job at a prestigious institution. It was everything I wanted. A salary, a predictable schedule, paid vacation days, a 401(k), and a small role in creating some of the finest art in the world.

But I missed the action. The work at Steppenwolf was satisfying—watching actors share their souls in two-minute auditions, knowing how much casting could make or break a play’s success—but it wasn’t exciting. Most days, I sat behind a desk. I missed the sweat, the groove, the energy, the work. Office life held no allure for me. It made little sense for someone trained in restaurant culture. If all my work was finished for the day, I couldn’t go home.

I couldn’t increase my earnings, either; no matter how hard I worked, I still made exactly the same every single week: roughly $14 an hour before taxes. Working in one of the most lauded cultural institutions in the third-largest city in the country earned me half as much as serving in the same city.

One Sunday night, I helped an old coworker throw a party at a house in Oak Park. He’d organized a pop-up event, pairing a chef with a local host for an elegant dinner in a unique setting. On a brisk October evening, with no room inside the house, we washed dishes in the moonlight, drying plates just in time for the next course. It was fun and silly. We laughed, giddy. I didn’t have one single moment like that working at a theater.

When I left Steppenwolf after three years, I dove back into the restaurant world with a ferocity only matched in my first years out of college. I worked at Fred’s Cafe in the Barneys New York in Chicago’s Gold Coast; I spent a year-and-a-half at a Michelin-starred fine-dining restaurant before moving to a hipster diner. I’m six restaurants deep into post-Steppenwolf life, at a joint in Hyde Park that sources local ingredients from nearby farms, while I try to push my writing forward and build a new entertainment booking management agency.

Once, serving was the side profession I endured while I ground out an arts career. Now, in my mid-thirties, I’ve grown to appreciate the work. It gives me a break from my hustle and lets me talk about food and drink for a few hours.

The Question has started to take on a different tone. I look younger than my age and have spent the past year working in proximity to a university. People think I’m a student, marking time. They’re surprised when I tell them my age, when I tell them this is my profession. There’s a tinge of concern in their faces, as if I’m somehow failing their expectations. As if I “deserve more than this.”

It’s fine that these folks take an interest in my life. But are they equally curious about the cooks who make the food they’re eating? The guys in back washing dishes? The various silent assistants clearing plates and bringing their food? Do they find value in their backstory, those coworkers of mine who often don’t look like me? If the clientele that can afford to dine at the restaurants I’ve worked saw all of us as people who deserve more, would they be willing to pay more for their meal and by doing so, help drive up wages for all? Or am I the only one deserving of their attention?

What I know is that the restaurant industry is complicated and multi-faceted, with a host of problems (no maternity leave; high rates of sexual harassment, racial segregation, and unenforced labor violations) as indicative of our country as any other industry. I know that my success in this field is due, in part, to the privileges afforded my identity. But I’d rather stay in this game—and surround myself with people playing it the right way—than pretend like it’s not a career.

Nicholas Ward’s writing has appeared in Catapult, Bird’s Thumb, Midwestern Gothic, Vol. 1 Brooklyn and on the 2nd Story podcast, where he is a company member. He lives in Chicago with Amadeus, the cat.

1. We Did Good, Billfold
2. Question Wednesday
3. What I Learned From Five Years of Writing and Editing for The Billfold
4. How a Program Assistant Dealing With a New Paycheck System Does Money
5. Classic Billfold: What I Wanted From My Move to Portland and What I Got
careersfoodfood-servicerestaurants