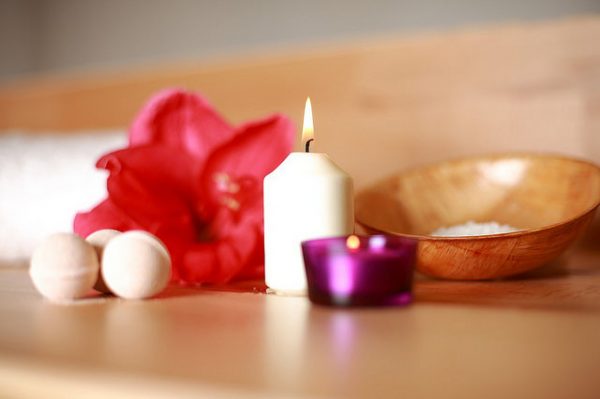 I recently paid for my first massage since moving to New York City three years ago. Reviewing the menu of services for the trendy Brooklyn studio—which includes pregnancy massage and a massage for when you’re on your period (Moon Cycle, in official parlance)—I couldn’t help but think, “this isn’t a job for a stranger.” Two years into being single, I am used to conducting lower back rubs on myself as I wait for Advil to kick in. But I still wonder if these types of services are a nice indulgence at the hands of a trained expert, or yet another hit to the wallet of the partnerless.

I was neither pregnant nor menstruating. But having recently picked up the nifty habit of clenching my jaw as I work, I signed up for the Back, Neck, & Shoulder Massage. Price tag: $120 for 60 minutes.

Society sells multiple myths about who is worthy of touch. Elderly people don’t get touched enough—neither do prisoners or middle-aged men going through divorces. I don’t fit into any of those categories. I have all of the bodily and social privileges of someone whom magazine covers and movie plots deem touchable: thin, young, hetero, cis. Still, I spend time on Tinder wondering if I have to go through the sex part just to get to the cuddling part, and lamenting to my friends that “hold me” doesn’t have the same vigor as “fuck me.”

As I lay on a heated table in Greenpoint listening to an instrumental version of an Ed Sheeran song, I realized I had joined the ranks of people who pay for touch. Because sometimes a stranger is the only one available.

I didn’t think much about touch in childhood. I didn’t have to. I come from a family of “huggers”—which means that, yes, I’m the person who exclaims “I’m a hugger!” while holding out my arms in front of a new acquaintance. At summer camp, I was the one who was always braiding someone’s hair. We would pile so many girls into one bunk bed that we looked like those pictures of puppies where you can’t tell how many there are. Two cabin mates invented a game called “cece” where they would lightly scratch each other’s forearms. Now I know this sensation is called ASMR. (A friend of a friend makes money on YouTube by evoking it.)

In college, the way people touched each other changed. We no longer reached for each other’s hair or forearms. In the skewed logic of hookup culture, all physical stimulation was sexual: healthy and natural to pursue, and an affirmation of one’s physical appeal. Touch was incidental, never to be the main pursuit, never to be asked for. Wanting to be touched without being stimulated was a vulnerability—a private shame.

The massage studio looks like the apartment of one’s most regimented friend. (Well, maybe a friend of a friend that doesn’t work in a creative field and can therefore afford to have a creative apartment.) The potted plant is very much alive. The “tapestry,” a tangle of rope and sticks placed against the wall, must be priced upwards of $200.

My massage therapist—we’ll call her Andrea—tells me that a Back, Neck, & Shoulder Massage is the same price as a full body massage that focuses on those areas. This sounds like the best of all worlds to me, and I agree and disrobe. But as she tugs at my limbs, I find myself tugging back.

When I was little, I had a dream that my bed was floating on the ocean. My arm was hanging over the side and a fish jumped up and bit the palm of my hand, a tiny pinch. The sensation lasted for a long time. I don’t sleep with my limbs out anymore.

Andrea will not let my arm slip off the bed. “I’ve got you,” she says. But my body pushes back as she makes adjustments. It’s the same with any manicurist; they all tell me to relax my hands, which I dutifully do, only to look down and find myself staring at a claw. The exception is getting my hair touched at the stylist’s, which inevitably lulls me into half-sleep as my ability to keep up with the requisite small talk deteriorates. Last time I went to a new stylist, I went mute halfway through the process. She finished my hair with an air of impatience, chatting to others in the shop. I left and checked my reflection for flaws in every shop window I passed. Maybe relaxed me just wasn’t likable enough.

Andrea tells me to roll over, then offers me a lavender mask. “That sounds nice,” I croak. She thumbs the underside of my jaw, like gently tugging at a wishbone.

Several months earlier, I was drinking a mango juice in Fort Greene when the waiter came and tapped me on the shoulder. “Can I get you anything else?” His touch made concentric heat circles from my body to the tables and chairs on the sidewalk and beyond to the entire lonely city. It wasn’t the heat of shame of unwanted touch—which I know from years of street harassment—but the new realization that “touch” wasn’t something other people yearned for. It was something I yearn for too.

Coincidentally, the waiter had tapped my “weird” shoulder. The one that hasn’t been totally the same since a high school performance of Swan Lake in which we were asked to hold our mantis arms in unnatural wings behind us. The pinching sensation has been exacerbated by years of carrying my overstuffed purse on that side. Many nights I’ve guided a few partners to that exact spot to lay their hand on the source of the pain. A relief that requires no expertise—just willingness, pressure, and heat.

Every day I believe less in shame. The yearning of a single person to be touched is not a personal failure, but a symptom of our modern isolation. I will no longer mentally distance myself from people that pay to be touched. $120 twice a year is $20 a month, the price of a taxi ride into Manhattan. I’ll take the subway, a lavender mask and the expertise of a stranger’s hands.

Daisy Alioto is a culture writer with a weakness for vintage architectural photography. You can follow her on Twitter at @daisandconfused.

1. We Did Good, Billfold
2. Question Wednesday
3. What I Learned From Five Years of Writing and Editing for The Billfold
4. How a Program Assistant Dealing With a New Paycheck System Does Money
5. Classic Billfold: What I Wanted From My Move to Portland and What I Got
money and relationships