We Bought a Street 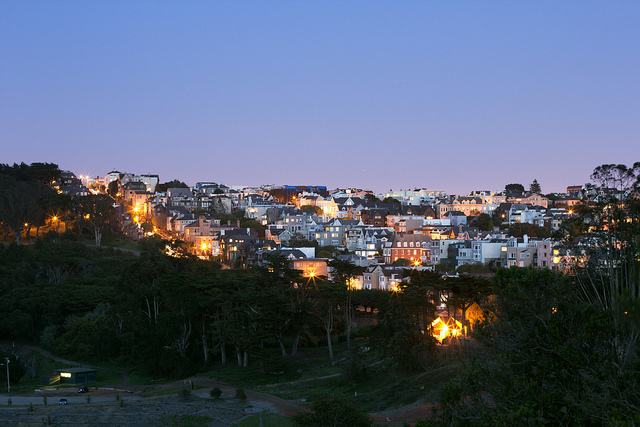 SF’s Presidio neighborhood. I’m guessing the street they bought is in there somewhere? (Photo credit: James Cohen, CC BY 2.0.)

From the San Francisco Chronicle: “Rich SF residents get a shock: Someone bought their street.”

Tina Lam and Michael Cheng snatched up Presidio Terrace — the block-long, private oval street lined by 35 megamillion-dollar mansions — for $90,000 and change in a city-run auction stemming from an unpaid tax bill. They outlasted several other bidders.

Now they’re looking to cash in — maybe by charging the residents of those mansions to park on their own private street.

The Chronicle doesn’t list any current mansion residents, but does note that past residents “have included Sen. Dianne Feinstein and her financier husband, Richard Blum; House Democratic leader Nancy Pelosi; and the late Mayor Joseph Alioto.”

Also, the reason Lam and Cheng were able to purchase the privately owned street is because the homeowners’ association failed to pay its street taxes for… wait, three decades? How do you forget to pay taxes for thirty years?

In a letter to the city last month, Scott Emblidge, the attorney for the Presidio Homeowners Association, said the group had failed to pay up because its tax bill was being mailed to the Kearny Street address used by an accountant who hadn’t worked for the homeowners since the 1980s.

And yet nobody asked “hey, shouldn’t we be paying some taxes” for THIRTY YEARS? And the person at the Kearny Street address never said “hey, this tax bill isn’t mine, I’d better tell the HOA about it?”

It was literally a $14-per-year tax bill.

There’s a bit of irony in the couple’s purchase. Until a 1948 U.S. Supreme Court ruling banning the enforcement of racial covenants, homes in Presidio Terrace could be purchased only by whites.

“The more we dug into this,” said the Taiwan-born Cheng, “the more interesting it got.”

1. We Did Good, Billfold
2. Question Wednesday
3. What I Learned From Five Years of Writing and Editing for The Billfold
4. How a Program Assistant Dealing With a New Paycheck System Does Money
5. Classic Billfold: What I Wanted From My Move to Portland and What I Got
real-estatestreets ahead