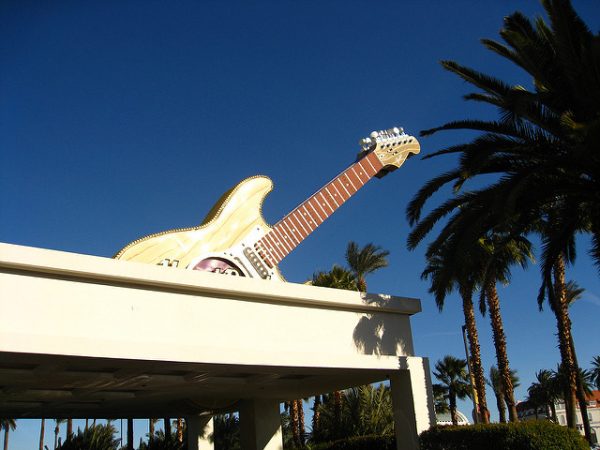 For years, I dreamed of staying at the Hard Rock Hotel in Las Vegas on my birthday. Once I finally realized my dream, it wasn’t all that I had anticipated. As soon as I entered my room, I discovered that I wasn’t part of the demographic that the hotel was designed to entice.

Staying at any hotel in Las Vegas that is designated a “hotel and casino” means that there will be hidden charges. I was overjoyed when I saw that there were rooms available for $49 during my birthday week. Immediately, I made a reservation for four nights. Then I read the fine print. There was a daily resort fee of $35. When I mentioned my reservation to a coworker, she informed me that there was an additional fee for potential damages. When I called the hotel to confirm, I was told that an additional refundable $50 a night would be added at check-in. My $49 room was now up to $134 and wasn’t looking like much of a bargain.

After the fees were deducted from my credit card, I made my way to my rock-and-roll sanctuary on the ninth floor. The elevator wouldn’t operate until your room card was inserted into a slot above the panel, a nice security feature for artists afraid of groupies following them to their floor. Each room was supposed to feature a photo of musicians and I was curious to see who would grace the wall in my room.

The framed portrait was the first thing I saw once I passed the dimly lit foyer. It consisted of four photos of young guys staying at a hotel. Who were these guys? Guy one was gazing at his reflection in a mirror. Guy two was strumming his guitar on his messy bed with a bottle of vodka in the background. Guy four was in a white bathrobe wandering a hotel hallway with an empty ice bucket in hand. But guy three was the one you noticed right away. The photo was taken from behind while a guy wearing too much eye shadow went wee-wee. Every time I glanced up from my king-sized bed, I would have to look at some guy using the toilet. Great.

The room was a nice size, with a sofa in front of a wall of windows. I got a view of the airport with mountains in the background and I could see the Mandalay Bay, Luxor, and MGM Grand looming in the distance. However, there was no microwave, coffee maker or refrigerator. Instead there was a cooler filled with expensive beverages and a tray displaying mini-jars of overpriced snacks. I would have to be on a rock-and-roll expense account to afford these items. Who wanted to spend $9 on a bottle of SmartWater that could be had at a convenience store for less than $2? A tiny jar of Jelly Bellies would set me back $10. A can of Coke that I could get for 85 cents at the beverage machine at work costs $4. Why were they charging $12 for a bottle of Crown Royal that probably cost $4 at BevMo? I did not touch this highly expensive display.

And then there was the bathroom. I guess that it was also designed for intimacy, because the bathroom door and the shower door were clear glass. The only solid door was the one that led to the toilet. The shower was large enough for several people to share. I discovered that if I sat on the bed and looked at the mirrored door of the closet, I could see the inside of the shower. If I were sharing the room with a friend or friends, I would have to leave modesty at home. On a shelf below the mirrored double sink was a scale. Who weighs themselves on vacation? Budding supermodels and skinny rock stars that like to be watched in the shower and photographed using the toilet?

I scanned the hotel directory: “Whether you’re in Vegas for an impromptu getaway to catch a concert with friends or to party like a rock star, Hard Rock Hotel has what it takes to cater to your every whim.” Unfortunately, my whim was to have a mini-fridge. I looked longingly out the window in the direction of the Red Roof Inn across the street where I stayed last January, remembering its microwaves and mini-fridges. Then I reviewed the dining options in the directory. There were Party Platters that needed to be ordered 24 hours in advance, good for when you were having a small reception for the new band that you managed. But $96 for two-dozen assorted cupcakes sounded obsessive. At the Reliquary Spa, I could get an eighty-minute drumstick massage for $225 and have bamboo reeds drummed, tapped and rolled over my body. An eighty-minute Couples Massage cost $470, enough to buy eleven Intimacy Kits.

But in spite of the excess, I enjoyed my stay at the Hard Rock Hotel. My room had more outlets than my entire apartment and I enjoyed the king-sized bed. The strong shower was invigorating and I loved the thick towels. On the evening that I arrived, I gambled $10 and cashed in $70, a big score for someone who hates gambling. At midnight, I had a slice of cheesecake to celebrate my birthday. The next morning, I awoke to a beautiful sunrise breaking over the mountains. But on my next visit to Vegas, my low-budget rock-and-roll getaway will probably be at a hotel with solid doors and a mini-fridge.

1. We Did Good, Billfold
2. Question Wednesday
3. What I Learned From Five Years of Writing and Editing for The Billfold
4. How a Program Assistant Dealing With a New Paycheck System Does Money
5. Classic Billfold: What I Wanted From My Move to Portland and What I Got
birthdaycake lyricsfancy-hotelslas-vegastravel